A scene from "The Electrical Life of Louis Wain"

Unfortunately, that film is not “The Electrical Life of Louis Wain.”

That film is Jane Campion’s “The Power of the Dog.” This one, ironically, is all about the power of cats – and those who love them. A movie poster for “The Electrical Life of Louis Wain”

Wain actually existed. He’s a kind of oddball footnote in the cultural consciousness of late-Victorian England. He specialized in kitschy kitty illustrations that featured darling anthropomorphic cats engaged in late-Victorian pursuits – from tea parties to tennis to doing the dishes.

Painfully shy, and we eventually learn, mentally precarious, Wain is the sole male in a bustling household of women. So, it’s a minor miracle of sorts that he finds true love with the family governess, Emily (“The Crown’s” Claire Foy).  Their happiness is compounded by a kitten they adopt.

But rather quickly, “The Electrical Life of Louis Wain” becomes “The Dying Wife of Louis Wain.” Emily gets cancer, and to cheer her up, Louis starts drawing cats.  The sketches can’t save her, but they do launch a career with the Illustrated London News whose publisher (Toby Jones) is looking to “fill his paper with something to raise the spirits of our readers.”

“I’d like you to fill them with your cats,” he says, though a few scenes later, after Emily is gone, he wisely notes, “They’re not just cats, are they?” 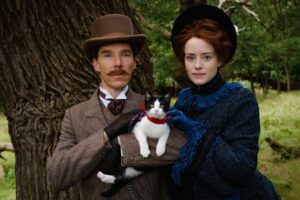 A scene from “The Electrical Life of Louis Wain”

Of course not.  They are Wain’s heart and soul and increasingly fevered brain. By the movie’s end, he’s ensconced in an asylum, happily drawing psychedelic portraits of cats that look as if they’d stuck a paw in an electrical socket.

Hence the title…maybe. The movie is like an overdone Victorian dollhouse, exquisitely clear about such domestic obsessions as wallpaper and china patterns, frustratingly obscure about just who Wain was and why we should care.

Much of the blame, I’m afraid, must go to the star who gives a fussy, overdone performance. He twitches, he quakes. He’s tormented by a childhood nightmare. And he bulldozes a capable cast much the same way that Frances McDormand did in “Three Billboards Outside Ebbing, Missouri.”

But then, come to think of it, she won an Oscar, didn’t she?

“The Electrical Life of Louis Wain” can be viewed on Amazon Prime.