The Giant Puzzle of Connecting Atlanta to the Chattahoochee 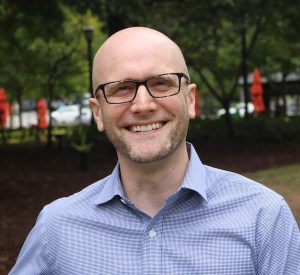 Atlanta’s relationship with the Chattahoochee has always been complicated and multifaceted. Historically a corridor of trade between the Cherokee and Muscogee people, the river was given over to industry after European colonization for manufacturing, power production, and disposal of waste. Some of these industries, notoriously Chattahoochee Brick, used an abusive system of convict leasing, exposing unpaid laborers of color to agonizing working conditions.

On the other hand, the Chattahoochee is also a vital natural resource, providing drinking water to Atlanta’s growing population and native wildlife. And let’s not forget the countless recreational opportunities it provides to Atlantans for hiking, tubing, kayaking, etc., nor the option to simply enjoy the river for its inherent beauty and the rich and diverse habitat it sustains.

It’s a puzzle, therefore, that despite these overlapping layers of natural, cultural, and historical meaning, the City of Atlanta and its residents have always been disconnected from the river. Only now are efforts to change that coming to fruition through a collaboration of community, nonprofits, local government, and neighboring municipalities. A closer look at these collective efforts to restore the Chattahoochee as an iconic and accessible public corridor—one which offers places of memory, restoration, and recreation—can serve as both a local and national model for advancing projects with lasting positive impacts on local ecology and culture.

Keith Sharp is a local leader who has been promoting Riverwalk Atlanta—a vision for a five-mile system of trails and parks along the river—since 1994. The project also aims to restore the local ecology through the methodical removal of invasive plant species, a process which requires a steady cadence of volunteerism, which Sharp and his righthand man, Michael Hudgins, have persistently and successfully cultivated through the years. Groundwork Atlanta, a local chapter of a national nonprofit organization, sprang from these grassroots efforts to bring public access to the river as well. Together with the community, they advocate for investment in equity and resilience in the community, while also nurturing the next generation of environmental stewards through job training opportunities. 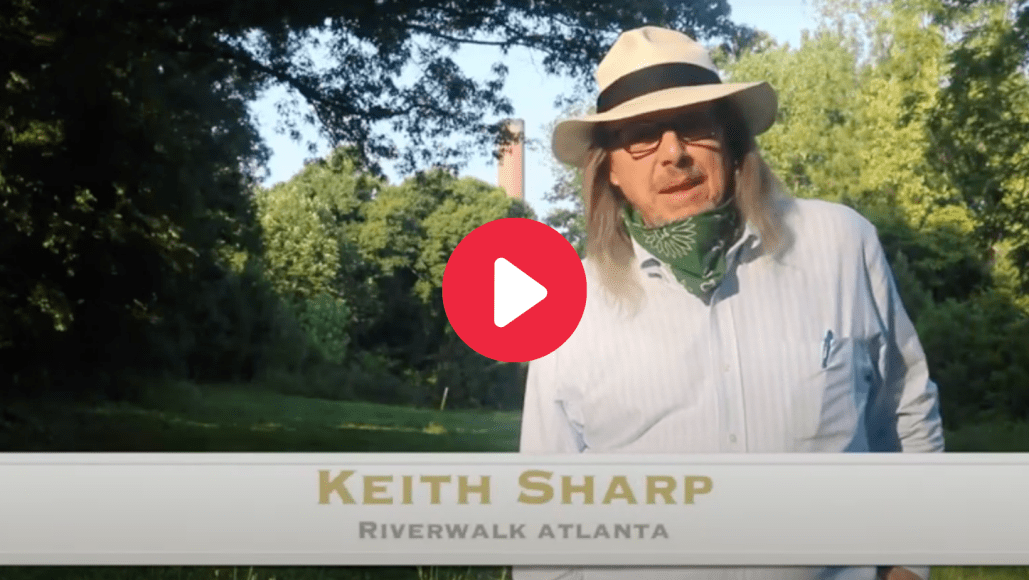 In 2020, local leader Keith Sharp was honored for his decades of pursuit of restoring the riverfront and creating public access to the Chattahoochee with a Park Pride Inspiration Award.
Watch the video above to learn more.

Riverwalk Atlanta took a major step forward in 2014, when Sharp was awarded $100,000 through Park Pride’s Grantmaking Program to purchase (with help from The Conservation Fund) two flood-prone properties to hold in trust for a new park. This initial investment was key in attracting city funding to purchase adjacent land (again through the sustained efforts of The Conservation Fund); taken together, a total of nine-acres will create a new public park and the first public access to the Chattahoochee in the City of Atlanta. 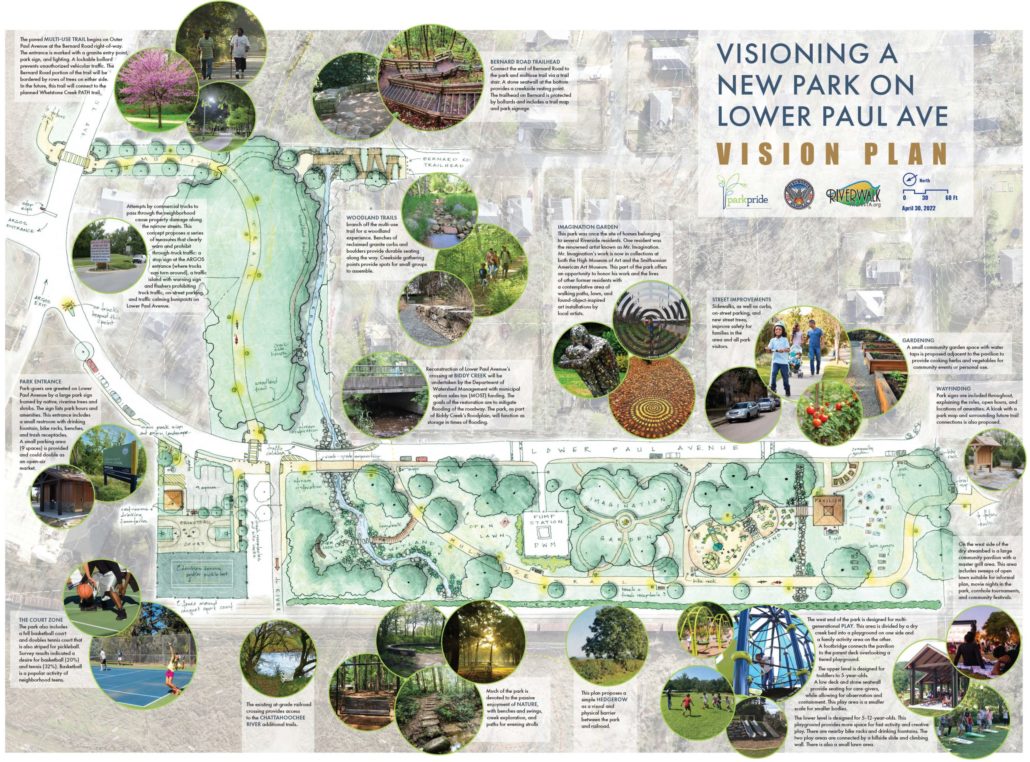 After providing seed funding for these investments, Park Pride worked with community and municipal partners to create a conceptual plan for this new park (currently referred to as the “Lower Paul Ave Park”) through our Park Visioning Program. After a six-month process of civic engagement, led by our small–but–mighty park visioning team (of which, as Park Pride’s Director of Park Visioning, I’m proud to be a part), we published a community-supported vision plan for this new park. This plan will be used to guide the future development of the park as it gets built out and serve as a valuable fundraising tool.

City of Atlanta officials continue to play a key role in the effort to restore and provide public access to the Chattahoochee. In 2018, the Department of City Planning prioritized an ambitious new approach to the river in their comprehensive planning document The Atlanta City Design: Aspiring to the Beloved Community. Rather than displacing riverside industry (which is valuable to Atlanta’s economy), the City envisions an approach of conservation and park and trail development that will “create a wild, adventurous riverfront that provides a welcome change of pace in the city.” Working directly with community, the City is making good on this vision with public funding directed toward strategic park acquisitions, including the recent purchase of Chattahoochee Brick (which will also provide direct access to the river).

All this investment and energy surrounding Atlanta’s riverfront also feeds into a larger, regional effort led by The Trust for Public Land. Called the Chattahoochee Riverlands, this project will connect communities to the river along a 100-mile stretch of “continuous public realm.” Published in 2020, after two years of public engagement and input from over 80 government and community partners, the plan offers a bold new vision for regional connectivity and outdoor recreation.

The Pieces Fall into Place

Keith Sharp recently reflected on the many years of effort to connect Atlantans to a restored riverfront. He used to think of the project as a giant puzzle with huge pieces. Now—with new partners stepping in to help and a building momentum—they’re more like a line of dominoes waiting to fall into place.

It’s an appropriate metaphore. Implementing a vision for projects as huge and impactful for the city and residents as those described here requires many partners, contributing in their areas of expertise, breaking the giant puzzle pieces down into manageable and clearly defined tasks. Only through collaboration and working together are we able to achieve our collective vision for healthier, greener, and more connected communities, neighborhoods, and regions.

Park Pride is proud to do our part for Atlanta!