A scene from "The Good Nurse"

Based on the true story of Charlie Cullen, a nurse who may have killed anywhere from 29 to 400 (!) patients, “The Good Nurse” is a face-off between superb acting and sub-par storytelling.

As the film begins, Charlie (Eddie Redmayne) is the new guy at a Jersey hospital. He’s also pretty much a small miracle for overworked Amy Loughren (Jessica Chastain), a single mom with two kids and a heart condition. She can’t take time off for a much-needed medical procedure until she’s put in enough hours to earn health insurance. 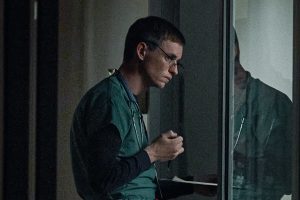 Charlie is helpful, kind, smart, responsible, always ready to pitch in. He’s also good with her young daughters and the patients. The thing is, Amy’s patients are mysteriously dying.

Two detectives (Noah Emmerich and Nnamdi Asomugha) think Charlie may be the missing link in these deaths. He’s worked at a lot of different hospitals. Hospitals where a lot of patients have died.

But Charlie is so helpful, kind, smart, etc. etc., etc. Could this sweet-faced man really be an angel of death?

Well, of course he is. But how to prove it?  Especially when the hospital itself is all but stonewalling the investigation. The cops aren’t called in until seven weeks after the first death, and the report the hospital administrator in charge (Kim Dickens) hands them is woefully thin. Plus, she seems more interested in the just-announced Code Purple (Pizza in the break room!).

Eventually, Amy is recruited to help in the investigation which, given her friendship with Charlie, makes her life even harder.

Redmayne and Chastain, both Oscar winners, are fascinating together. They have an offbeat chemistry that reflects the offbeat rhythms of their film. No one runs down spooky dark hospital corridors in “The Good Nurse.” Nobody sneaks up on a colleague, hypodermic needle in hand.

“The Good Nurse” is a quieter picture than that and, as such, it sends off a creepier vibe.

But there’s a problem. Namely, the sense that the movie is telling the wrong story. Apparently, no one ever figured out why Cullen did what he did (or, as I said above, how many times he did it). 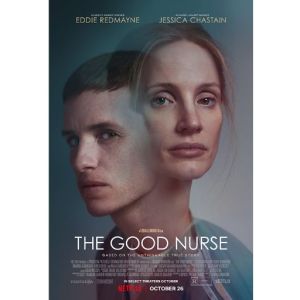 Movie poster of “The Good Nurse”

What is clear is how the hospital system handled the problem. Or rather, mishandled it. Just as some elements in the Catholic Church passed known predators through the pipeline, putting the sanctity of the institution over the safety of the congregation, a number of hospitals turned a blind eye to Cullen’s possible connection to patients who passed away.

The dramatic fulcrum exists between the cops and the hospital administrators, and while those actors do strong work, the script simply doesn’t support them. Redmayne and Chastain are where the money is and that’s where the movie puts its full attention.

As a result, watchable as it is, “The Good Nurse” is a tad flat, a bit unsatisfying.

However, it does do one thing very well. It reminds us of what a tremendous gift a good nurse is. How much of a difference dedication, compassion and seemingly effortless professionalism can make. It took a pandemic to make many of us begin to appreciate these angels with bedpans.  Let’s not forget them now.

“The Good Nurse” is currently streaming on Netflix and is also available in select theaters.