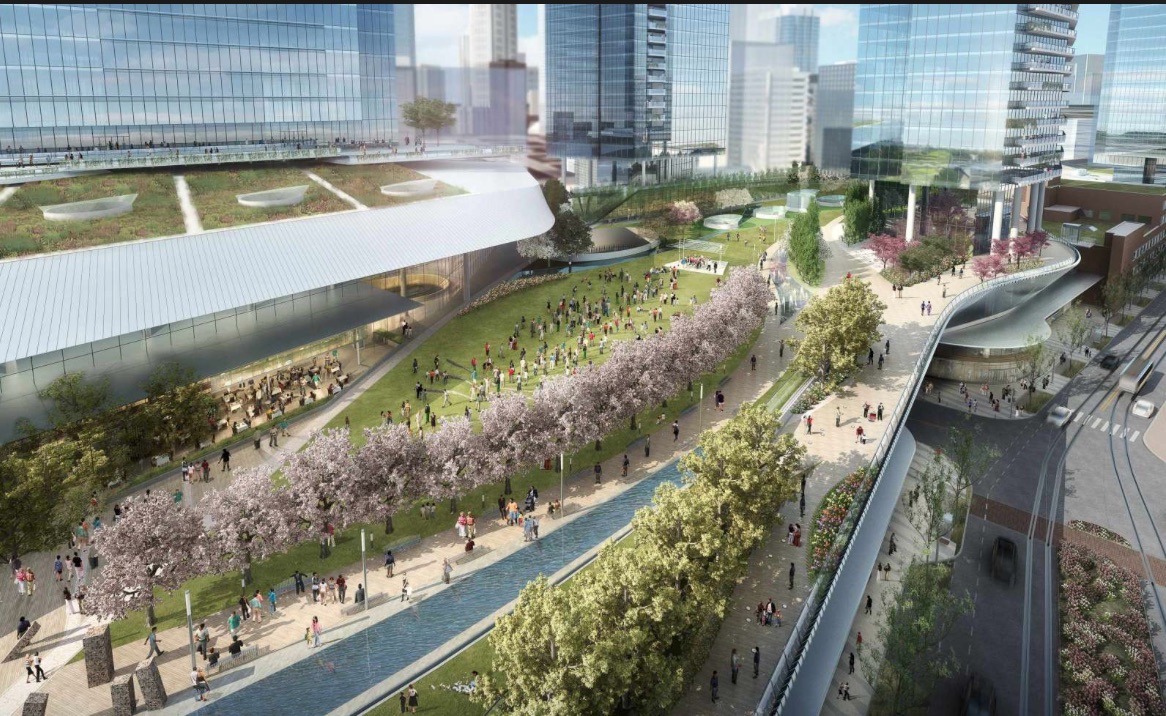 By Guest Columnist MIKE DOBBINS, professor of the practice at Georgia Tech’s College of Design and former Atlanta planning commissioner

With the Atlanta City Council’s action to approve the CIM deal to develop the Gulch in Downtown Atlanta, what should city officials and citizens be doing to follow up the many, many complicated steps, approvals, and financial transactions that will now persist over a 20-plus year timeframe?

On the one hand, continuing to trust that CIM has the best interests of the whole city in its heart, as the mayor and eight council members did, we can just leave it to them – and probably their many successors and co-developers – to have at it.

On the other hand, as the other six council members and community activists pressed for, we can create a structure for holding CIM accountable to try to gain some semblance of performance on their vague and fungible promises.

As it happens, we have a precedent. Four years ago the city conferred a $1 billion commitment upon the Falcons to build and operate a stadium. Along the way, they demolished two African-American churches, one of huge historic significance, and they further walled off the mostly African-American, low-wealth west side neighborhoods from Downtown. The owner, Arthur Blank, cleverly teed up a lot of little approvals along the way to get the city as committed as possible before the community woke up.

In that case, however, the city and its citizens ultimately were able to have some influence over the outcome. Over a series of street abandonment ordinances to expand the footprint of the stadium, Atlanta City Councilmember Natalyn Archibong, chair of the committee of purview, was able to get her colleagues to take a pause, enabling a much fuller vetting of the issues and concerns of the impacted citizens. These conversations led to a number of public hearings at city hall, where community benefits agreements were the focal topic. The hearing addressed what kinds of priority needs and concerns required action to address, and how might Blank be held accountable to achieve them? 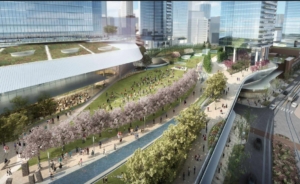 While Blank would not agree to a CBA, the process allowed the communities to sharpen their understanding of needs and processes that could move in a positive direction. And it informed Blank on the range and depth of problems that people on the west side were facing. His emerging list of non-binding promises, therefore, was much clearer and to the mark than the kinds of vague representations floating out of the hurry-up process that led to CIM’s approvals.

The west side Blank-led follow-ons, while far from perfect, are significant and generally positive. Multiple ongoing forums hosted by the Westside Future Fund and others have led to positive actions that generally track many of the CBA provisions that were born out of the pre-approval city hall public hearings. These include responses to the range of community-identified issues, such as affordable housing, provision of jobs, park development, and improvements to infrastructure.

Importantly too, these forums have put people across the spectrum of race and class in Atlanta in contact with each other. Blank and a couple of other billionaires appear to be staying the course of listening and making some effort to engage. There is evidence that this mutual listening could be building mutual respect and glimmers of mutual trust, the essential underpinnings of community stabilizing and building. No, not enough yet, but at least drops in the bucket.

To complete the comparison with the CIM process and outcome, all we have here is a vague, palpably unengaged, and at this point uncaring deal out of the developer, yet somehow endorsed by the mayor, council, and civic “leaders” as champions. In contrast to the Falcons deal, we don’t even have a bucket, let alone any drops that might reliably and accountably trickle into it.

Regrettably, unlike the Falcons process, the mayor and council have given up their leverage – the horse is out of the barn. At this point, is there any way to glean any citywide benefit out of the deal?

Yes, the Gulch should be developed, and, yes, it will require government resources and approvals. But the government, our government, blew it. Where it should have used its money and approval authority to carry out public policy priorities, it instead turned its public responsibilities over to CIM, whose bottom line goal has to be maximizing profit for its owners. This is an especially disheartening defeat in the context of the recent election. Against Atlanta’s persisting and lasting greatest shame, hopeful signs emerged that poverty and inequity were finally rising in priority. 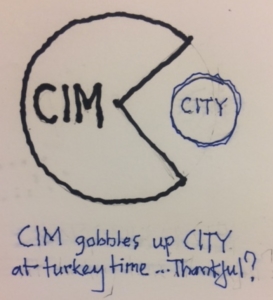 This deal is a big step backward. It offers at best crumbs for meeting the needs of the many and great bounty for the few, thus accelerating the forces that cause the inequity in the first place. In a city with a booming real estate industry, further heating up what’s already hot and diverting resources away from where the needs are greatest is unconscionable. Yet, in a way echoing the former mayor’s modus operandi, that is what the mayor and council have done.

Is there any way forward that might rebalance the resources given up to care about the city as a whole? The issues that rose in the short and harried “debate” before council action are still out there, and will be over 20 years or so, as whatever CIM does with its money decides. So, fundamentally, will the city and its citizens have any say-so in how that trajectory unfolds? Only with persistent and forceful oversight as each of the follow-on approvals and appropriations go forward, a difficult and complicated commitment now that the underlying deal has been struck. It’s conceivable that the process could still be slowed down in the bond validation process: There could be questions raised about state constitution provisions in the Enterprise Zone Act limiting the availability of that portion of the deal’s financing scheme.

Here’s where we stand. By virtue of its tax advantages the deal will attract development away from where markets are already hot with sites already available for development whose tax resources would have gone into the city-wide pot for city-wide purposes. Tying up those resources for CIM’s gain is a travesty. At least the citizens’ and some council members’ advocacy shortened the original deal’s 10 year extension. This in itself was a clear indicator that the earlier representations that the deal absolutely had to have that extension was a sham. Developers for starters always represent maxing out their gain as essential unless and until some responsible approval process reins that in. Indeed, developers in responsible jurisdictions expect that.

The $12 million for citywide economic development? Watch out. That money could produce something useful, but in the weeds watch it go to fill pockets instead of jobs.

The 3,000 construction jobs? Those would have happened anyway, most on fully tax paying projects. Likewise, the 35,000 permanent jobs for the gulch, which will now occur on properties where the tax resource is held by CIM instead of citywide. 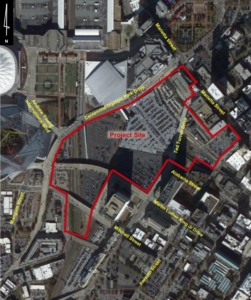 The 2017 version of proposed development at the Gulch in Downtown Atlanta would replace surface and deck parking with a mini city including a hotel, apartments, and office and retail space. File/Credit: Kimley-Horn

The 200 units of “affordable” housing? A paltry commitment, where, unless it got changed, defined affordable as way beyond the incomes of half of our population with the right for CIM to convert it to market rate in three years.

The $28 million commitment to a housing trust fund? Again, crumbs at best, maybe enough to build 150 units, accountability undefined, 4 percent of the mayor’s billion-dollar commitment, and again, watch out. No telling how, when, or whether that money will actually go to closing our huge affordable housing gap.

The future of a multimodal transportation hub as the base for high density mixed use development? The deal cripples the kind of multimodal transit service envisioned for the Gulch, a longstanding goal of the city, Central Atlanta Progress and Georgia Department of Transportation. GDOT put forward a plan in 2014 that provided full interconnectivity for local bus, MARTA rail, commuter bus, commuter rail, intercity bus, and intercity rail as a platform for an exciting vision for what goes on top. GDOT’s effort was much more thoroughly planned out and publicly vetted than the CIM deal, the final result of which, though, according to the consultants, was ordered by the governor to be taken off GDOT’s website.

Finally, at the base of improving the chances of our kids growing up in poverty – presently only 4 percent are predicted to escape poverty, putting us at the bottom of cities nationally – the deal not only commits nothing, it actually sequesters unto itself funds that would have otherwise gone to public schools if developed on fully tax paying properties.

The Gulch will develop incrementally. Can it develop transparently, accountably, and with fair and enforceable provisions that directly address the city’s wealth divide and persistent poverty? Less likely now that the city has given away the farm. The city, with its real estate boom, had the unique opportunity here to step up its commitment to rise above its longstanding shameful neglect of the 25 percent of its citizens whose needs for their share of public resources go unmet. The “Atlanta Way” seems to have forsaken them once again.