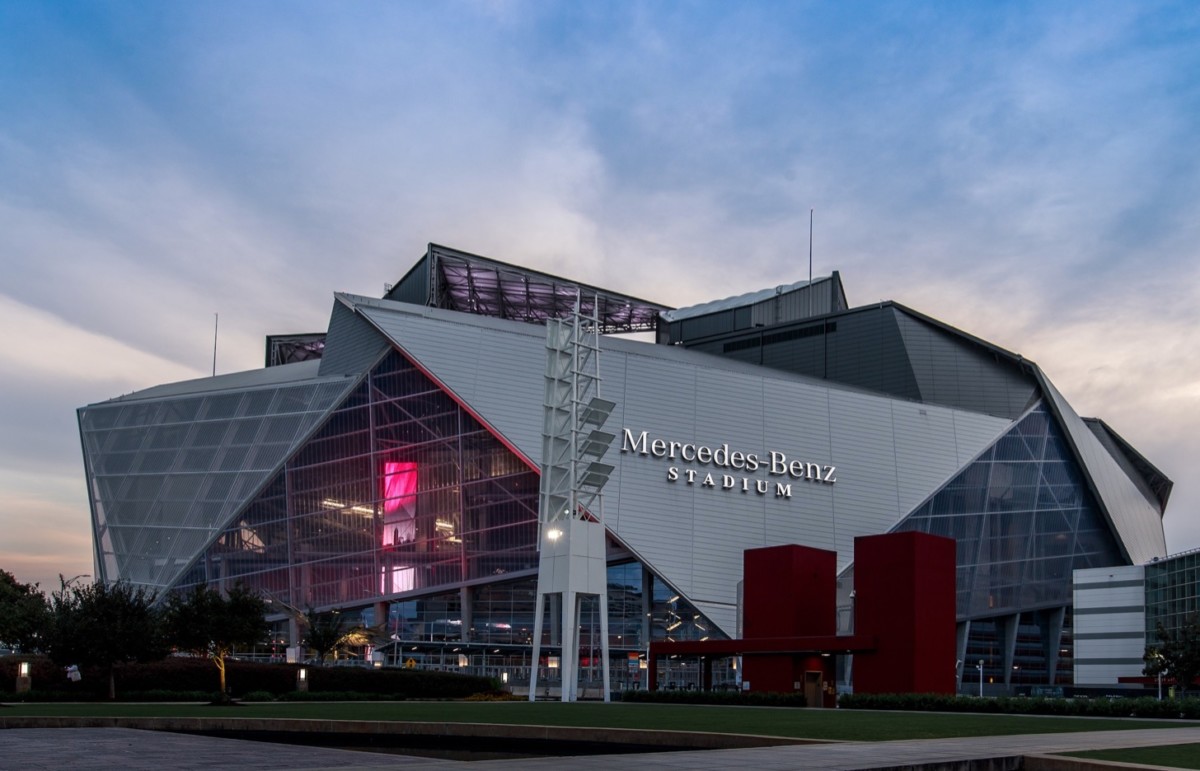 The Mercedes Benz Stadium is an arresting presences that projects an image of being all about itself, rather than the events hosted inside, according to columnist Mike Dobbins. Credit: mercedesbenzstadium.com
Share72
Tweet
Share
Pin
Pocket
WhatsApp
Buffer5
Email
Reddit
77 Shares

While the Super Bowl devours downtown Atlanta, The Home Team, a new short documentary, highlights the neighborhoods most affected by the Mercedes-Benz Stadium—English Avenue and Vine City—and examines whether promises made to residents of those neighborhoods have been fulfilled.

The 45-minute documentary focuses on the perspectives of west side residents, weaving in experts and the viewpoints of politicians, philanthropists, and nonprofits that have been charged with helping the area. The film takes a critical eye to the tax breaks received by the stadium, a massive public contribution, and whether residents in the area have had any tangible changes in their quality of life. “We — Atlanta — have let these neighborhoods become an eyesore of the city, the birthplace of the Civil Rights movement,” The Home Team‘s website states. “This film explores the culture that saw fit to invest hundreds of millions of public dollars in a sports venue while neglecting the community just across the street.” 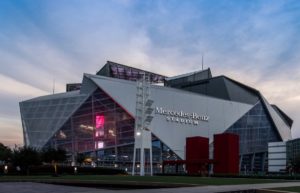 The Mercedes-Benz Stadium, the site of this weekend’s Super Bowl. (Credit: mercedesbenzstadium.com)

Tonight, the documentary will have its first screening at Midtown Arts Cinema. Interested in attending? Reserve your seats here.

Ahead of the screening, director Camille Pendley talks about making the film, the Super Bowl, tax breaks, and the housing insecurity faced by many residents of English Avenue and Vine City. (This interview has been condensed and edited for clarity and length.)

How did the idea for the documentary start?

Camille: Laura Asherman, the co-director, and I started on the film two and half years ago, in summer of 2016. I was freelancing at the time, and there was so much excitement and buzz in the city around the Mercedes-Benz Stadium, the potential of a Super Bowl, and all that would mean for the city. I was meeting people from English Avenue and Vine City, the two neighborhoods that border the Mercedes-Benz Stadium, and it was clear to me that their perspectives were not at all included in all of that buzz. And so I really wanted to make this documentary to tell the other side of the story.

What kinds of narratives are out there about the neighborhoods impacted by the stadium, and what did you see that challenged them?

One narrative debunked by the perspectives of neighborhood residents was the idea that all of the money coming to these neighborhoods as a result of the stadium was going to solve their problems. And when I met people in the neighborhoods, their reaction to the idea of millions of dollars coming into their neighborhoods was not the simplistic, gleeful excitement that one might expect. First of all, these neighborhoods have been through this before with the Georgia Dome. They had promises made that were broken. So, there was caution, and there were certainly lots of hopes that the promises will be fulfilled, that the money would make a difference for them and not just for newcomers to the neighborhood. But there was a heavy dose of caution and skepticism and distrust of, maybe no one player in particular, but a system that really hasn’t given them reason to believe that it’s there for them, for these people in the neighborhood.

One thing that I think some viewers may find surprising, certainly if you’re not familiar with these neighborhoods, is that it really is a tight-knit community. It really is, amidst all the struggle; people know each other’s names, people stop and talk to their neighbors without plan. That doesn’t happen in my neighborhood. 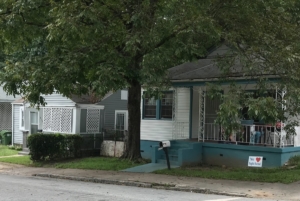 What do you think the Super Bowl means for the city, particularly those residents in west side neighborhoods?

I think the Super Bowl is certainly a parallel symbol in the sense that, in theory, it’s supposed to bring so much money to our economy, it’s supposed to help Atlantans. But economists argue that stadiums don’t actually substantially help cities. The jobs that are brought for stadiums are temporary, or they’re less than 40 hours a week half of the time, like concession workers and ushers inside the stadium; those are not full-time jobs. So they both, in my opinion, overpromise and underdeliver on what it actually means for the people of Atlanta.

The documentary zeroes in on the tax breaks received by the Mercedes-Benz Stadium. Why do you think that focus is important?

The documentary points out the Falcons are not paying property taxes on the stadium. There’s a lawsuit against the Fulton County Board of Assessors for that cause. There are some stadiums in the country that do pay property taxes. Certainly, property taxes would be one way that the stadium entities could give back to the people of Atlanta and indirectly give back to the people in these neighborhoods. In DeKalb and Fulton counties, of the people that are in the extremely low–income level of the federal poverty line—that means, for a family of four, they’re making $24,000 or less—only three of those people out of 10 have access to an affordable housing option. And that’s just the people that are living under the federal poverty line. So why are we not giving them tax breaks there? Why are we not opening up public housing vouchers in these neighborhoods that have already been slighted by development in the past? We like to bill ourselves as the birthplace of the Civil Rights movement. This is a massive opportunity to protect that legacy, and we should put our people over business opportunities in these ways.

What did you hear from residents about their feelings about the future?