‘The Intern’ – a confused movie of genders and generations 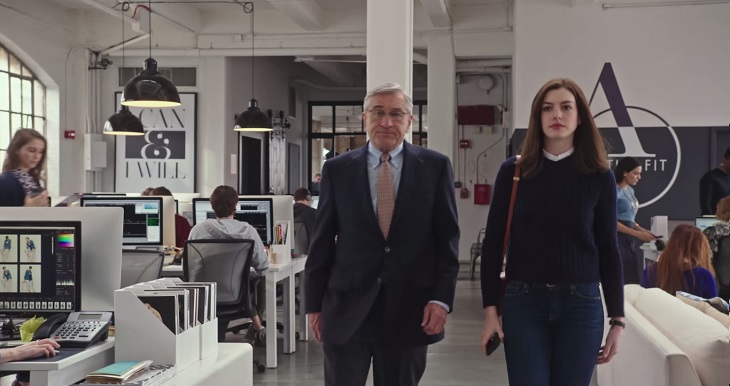 To dismiss Nancy Meyers as a fifth-rate Nora Ephron is, admittedly, an insult.

Meyers has been writing and/or directing movies since 1980. In all that time, she’s made two and a half good movies: “Private Benjamin,” “Something’s Gotta Give” and the first half of “Baby Boom.”

“The Intern” is repulsive.

The set-up is promising. Jules (Anne Hathaway) is the founder of a successful online apparel site. Though she has her bitch-boss moments – “Don’t blink too much,” a character is told before going in for an interview – she’s essentially an adorable ditz who’s ambitious in a non-threatening way. She rides a bike through her cavernous, oh-so-Google-y office and likes to get in the trenches with her employees. 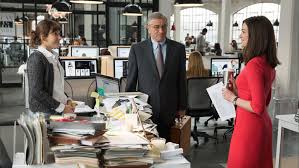 A scene from ‘The Intern’

She’s socially conscious as well, which is why the company has initiated a reach-out program to hire Senior Citizens as interns.

Enter 70-ish Ben (Robert De Niro). He’s a widower who’s tired of golf, reading and going to funerals. So he applies for the program and ends up with, well, what some would call the booby prize. He’s assigned to Jules who thought the program sounded fine, as long as she didn’t have to participate.

But much like the so-called Magical Negro, Ben is the Magical Old Guy. He doesn’t just make things right; he makes them better. And “things” range from something as trivial as why a man wears a suit (more on that later) to how Jules can have a have-it-all life with time for both career and family. In other words, if she’ll just take Ben’s gentle guidance, she won’t end up a devil in Prada.

In fact, everyone who comes into contact with Ben benefits from his twinkly-gruff wisdom. He explains to his younger colleagues there’s an important reason they need to wear a suit or, at the very least, a collared shirt. You see, a real man should always have a hankie at the ready should a lady start to weep. 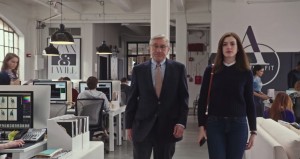 A scene from “The Intern”

Say…huh? De Niro/Ben’s generation, if I’m not mistaken, is pretty much concurrent with that whole hippie thing. They’re the ones who rejected the Man in the Gray Flannel Suit.

However, almost all the movie’s social cues are off-kilter. Asked to name his favorite music, Ben says Mile Davis, Sam Cooke and Billie Holiday. Granted, these are peerless choices. But what about Dylan, the Beatles, even the Stones?

And Ben’s idea of a romantic movie is an old Gene Kelly flick.  Yeah, the Boomers loved Bogart, the Marx Brothers, Tracy and Hepburn, Kelly and Astaire.  But as nostalgia pieces.  Someone who grew up in the late ‘60s and early ’70s would more likely think of, well, it could be anything from “Bonnie and Clyde” to “Romeo and Juliet” to “Harold and Maude.”

Ben is like some mythical Mad Man who sailed by Woodstock and Watergate unscathed. His courtly Old School style has more to do with Don Draper than Jack Nicholson.

Who, by the way, is invoked when Jules wonders where the real men are — like Nicholson or Harrison Ford. When did men become boys and girls become women, Jules wonders. It’s a line that must’ve sounded awfully clever over brunch in the Hamptons.

And when did Meyers ever hear a woman her age (mid sixties) exclaim, “Hold you horses?”  She might just as well have squealed, “You’re the bees knees.” 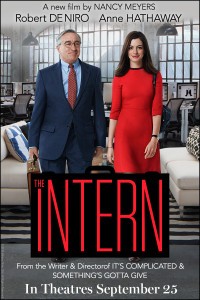 It’s left to Ben to make all the feminist statements (At one point, he actually says, “I hate to be the feminist here…”). Meanwhile Jules wonders if, perhaps, boys were left un-nurtured when “Bring Your Daughter to Work Day” began.

Hathaway does her considerable best to make sense of her role. You can see how honored she is to be working with De Niro and how much she’d like the picture to be good.  But then, she’s a trained professional. Remember her yeoman effort when paired with the reprehensible James Franco as Oscar co-hosts?

De Niro doesn’t work as hard, but then, he doesn’t have to.  The movie is handed to him on a plate. All he has to do, as Spencer Tracy used to say, is know his lines and not bump into the furniture.

Though, it being a Nancy Meyers movie, it’s very nice furniture.