The 1842 Powell Building is the oldest historic structure on the campus of Central State Hospital and among the buildings undergoing asbestos abatement. The state says the Powell, at least, is not targeted for demolition amid concerns about endangered historic structures there. (Photo by Halston Pitman/Georgia Trust for Historic Preservation.)

Renewed concerns about the historic campus at Milledgeville’s Central State Hospital (CHS) are a reminder that public buildings embody the government’s opinion of the people who use them.

CHS’s columns and domes are grand because 180 years ago, the state was proud of establishing a mental health hospital as part of national social reform efforts. Today, they’re mostly rotting because the state failed to properly care for many patients, shuttered many facilities in a new era’s reform, and has remained neglectful ever since. 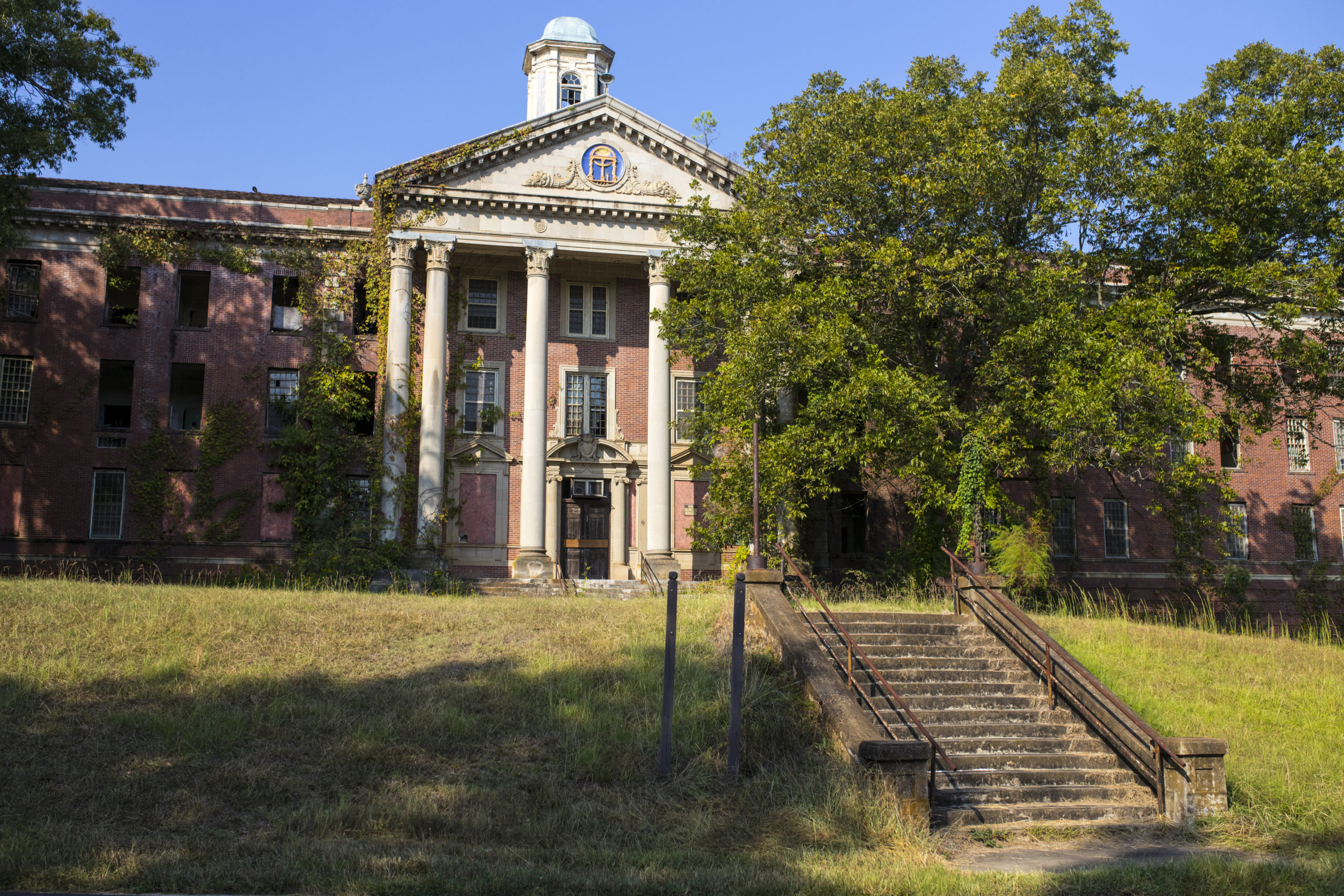 The Jones Building at CSH, dating to the late 1920s, was among those marked for demolition in an unsuccessful funding request last year from the Central State Hospital Local Redevelopment Authority. (Photo by Halston Pitman/Georgia Trust for Historic Preservation.)

Now state and Baldwin County agencies are jockeying and bickering over the fate of historic properties that none of them have the money or experience to handle, most recently with a lawsuit over the ominous issue of who pays for fire department coverage. Surprise asbestos removal in several key buildings this month stirred controversy about possible demolition that almost certainly is not imminent – and not only because no one involved could afford that bill anyhow. Behind the disputes, there appears to be agreement among those locally based authorities that saving and reusing at least some buildings or facades during redevelopment is the right thing to do for a hospital of monumental significance in Milledgeville’s past and present.

“I would like to see just the facades saved,” said Edwin Atkins, a leader of the popular history group Friends of Central State Hospital. “The [state] mental health people, they’re just saddled with this problem that they don’t know what to do with.”

He was referring to the Georgia Department of Behavioral Health and Developmental Disabilities (DBHDD), which still runs a remnant of the sprawling, 2,000-acre CHS campus and controls some key historic buildings. DBHDD is no real estate or preservation expert and has $3 million total in the current state budget for maintenance and repairs on all five of its hospital campuses. Like local agencies, it’s left carrying out ad hoc and piecemeal efforts like the asbestos abatement, which Ashley Fielding, DBHDD’s assistant commissioner for agency affairs, describes as part of an urgent response to legal liability for trespassers.

“There are some persistent ghost hunters, college students, people who travel far and wide, or people in the community who are curious about these buildings and their history and what may be inside of them,” she said.

Of course, today’s trespassers could be tomorrow’s tourists. This is a site of state and even national historical significance, within Atlanta’s predecessor as Georgia’s capital city. “They could develop that [campus] into a really great historic tour, walking tour, with a great light show,” said Atkins, likening the potential to Philadelphia’s Eastern State Penitentiary, a once-abandoned prison with a similarly checkered past and white-elephant status that is now a tourist attraction.

There are small-scale tours today out of the Milledgeville Visitor’s Center, but no plan or pot of money on that level of preservation and attraction. Indeed, the state continues to receive criticism from a court-appointed monitor for its treatment of people with mental health issues or disabilities, demonstrating why remembering CSH’s sometimes sordid history is still highly relevant as well as why there’s little money to do so.

“These structures, and this space, represent our state’s complex history of how we have approached mental health for three centuries,” said David Yoakley Mitchell, executive director of the Atlanta Preservation Center, one of the outside groups keenly interested in CSH’s fate. “They are also a core part of the story of Middle Georgia and Baldwin County. We should embrace this opportunity to explore our story through historic preservation of these buildings rather than removing them from both memory and sight.”

Construction on the original CSH “asylum” finished in October 1842 – 180 years ago this month, according to the New Georgia Encyclopedia. While its original name included such now unenlightened terms as “lunatic” and “idiot,” CSH at the time was a progressive institution using a then innovative practice of close social interaction between staff and patients, and eventually became one of the largest of its kind in the U.S. Its enormous campus, eventually numbering 200 buildings, also became a huge economic and political engine for Milledgeville and the county.

However, by the late 1800s, CSH was already straying from its reformist roots to become a place to warehouse “unwanted or problematic” family members and citizens, as the encyclopedia put it, including former enslaved people “deemed unfit for independent living according to the principles of scientific racism.”

In the 20th century, CSH drew repeated controversies for poor care and the use of electric and insulin shock therapies. Atlanta Constitution reporter Jack Nelson won a Pulitzer Prize for his 1959 exposes on patient abuse and mismanagement in the system. Those reports triggered reforms that by the 1960s included the creation of other state hospitals and the renaming of the Milledgeville campus to Central State Hospital.

In 1999, Georgia lost the landmark U.S. Supreme Court case Olmstead v. L.C., brought by mental health care patients who demanded the right under the Americans with Disabilities Act to receive community-based care rather than institutionalization. And in 2007, another round of investigative reporting by the Atlanta Journal-Constitution revealed more serious problems with the system, including scores of patient deaths, chronic underfunding and poor standards of care. That triggered a federal investigation and settlement with monitoring that continues today and led to a 2011 downsizing of CSH and the entire hospital system.

Much of the remainder of the sprawling campus was simply left vacant, including the 1842 Powell Building at the heart of it all. A decade ago, the state established the Central State Hospital Local Redevelopment Authority (CSHLRA) to plan a redevelopment of the campus – a concept now dubbed Renaissance Park. The CSHLRA has brokered several building sales for commercial uses and done such other work as erecting historical markers. But it has not taken control of all of the buildings, including such key structures as the Powell.

Those historic buildings have been left in a state of serious neglect, earning the campus two appearances on the Georgia Trust for Historic Place’s annual “Places in Peril” list, in 2010 and 2019. Only two buildings – the Powell and an 1890 storehouse called the Victorian Building – are on the National Register of Historic Places, and that affords no legal protection against demolition.

That’s why there was local uproar – including over 1,000 signatures on an online petition – when DBHDD this month put up fences around several historic buildings before explaining it’s for asbestos abatement. Those buildings include the Powell and three other grand structures – the Green (1947), Jones (late 1920s) and Walker (1884) buildings – plus a 1954 communications building and a steam plant structure.

The official line from DBHDD is that the asbestos work is necessary for immediate safety reasons, though Fielding did not explain exactly what those are, including why fireproofing would be removed when fires are a prime concern for the County.

Mark C. McDonald, president and CEO of the Georgia Trust, said asbestos removal is typically a precursor to rehabbing or demolishing a building. “So it’s not a good sign. And I’m disappointed that no one reached out to us,” he said. 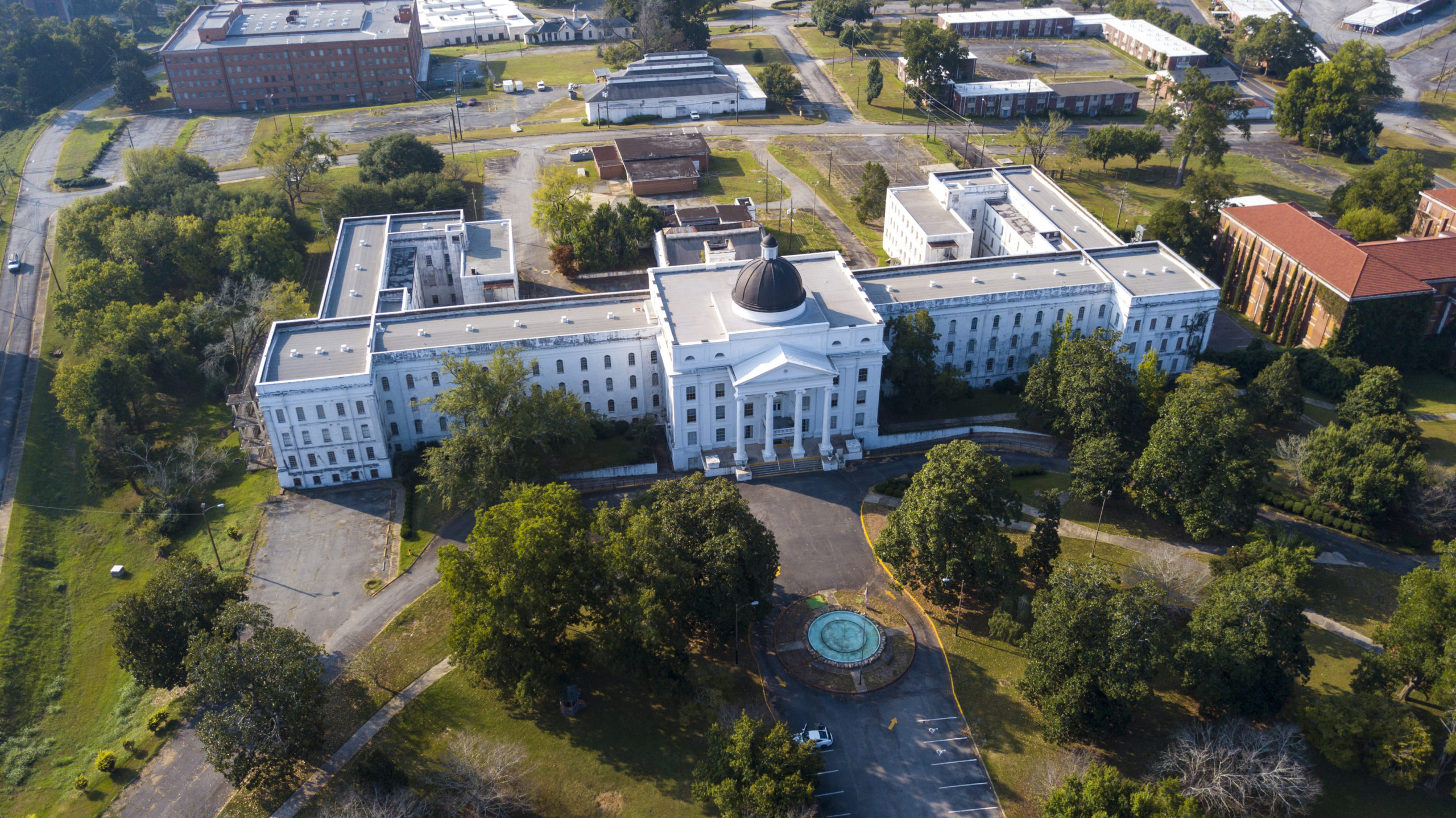 Another view of the Powell Building at CSH. (Photo by Halston Pitman/Georgia Trust for Historic Preservation.)

After the publication of this column, Fielding clarified that DBHDD considers the Powell, at least, to be off any demolition list. “Powell is at no risk for demolition,” she said in a text message. “There is some mitigation work going on there, but the conversation about anything further does not involve Powell.”

And there’s reason to believe the DBHDD’s deeper motive making the buildings a bit easier for the CSHLRA to acquire amid political maneuvering for money and resources. In fact, the CSHLRA last year, under different leadership, unsuccessfully sought federal funding to acquire and either demolish or preserve several of the same buildings, as reported in the Milledgeville Union-Recorder. That plan would have saved the Powell; saved the facade of the Walker while demolishing the rest; and demolished the Green and Jones buildings along with an apartment building and the steam plant.

The CSHLRA exists for the long-term goal of acquiring and disposing of all of the property eventually, and Fielding clarified that’s a general motive for the asbestos work, too. “Pretty much any work we do to those buildings we no longer use is in service of it being transferred,” she said, also emphasizing safety concerns.

Also last year, the County sued DBHDD in a dispute over a long-term agreement that puts the state agency on the hook for paying for firefighting service. Atkins said he believes that case, still making its way through Fulton County Superior Court, is really an attempt to force a transfer of the property to the CSHLRA – possibly with a total teardown.

Fielding said there have been no fires on the campus for the “last several decades” — except one reported in March on the day state and County officials met there for lawsuit settlement talks. The County Fire Department did not respond to questions about fire reports and its City counterpart referred questions back to the County.

County officials did not respond to questions. Walter Reynolds, the CSHLRA’s interim executive director, did not respond to comment requests by email and the authority’s phone number was answered as disconnected. The Union-Recorder this month quoted Reynolds as saying he would prefer that DBHDD only abates and secures the buildings.

Both of those are smaller campuses with fewer historical complexities. And no one has the money to do much more. DBHDD is paying for the asbestos work – around $5 million, according to the Union-Recorder – out of one-time internal surplus funds following staff cuts. Additional major work like demolition or rehabilitation would require a Georgia General Assembly appropriation.

“Those people don’t know anything about historic preservation,” Atkins said of the agencies and governments currently involved. He said his group thinks the Property Commission – a state agency chaired by the governor and specializing in real estate disposition – should be in charge.

McDonald at the Georgia Trust echoed the need for major resources and expertise while also emphasizing the need to preserve structures for the site to realize its potential. “I will say that it’s a tough job they have cut out for them because the buildings are not only in bad shape, they’re not really in the main core of Milledgeville,” he said. “…With every building that’s lost, it’s hard. In a development like this, it’s important to have a critical mass.”

Still, this is a major historical site in one of Georgia’s most historic cities. It’s a site and system with serious underinvestment from a state government that regularly touts tax breaks and grants elsewhere handed out to wealthy corporations. It’s 90 miles down the road from Atlanta, where developers are in a feeding frenzy over hyper-gentrifying neighborhoods while places like this really could use a boost.

Those CSH buildings tell us about a past when the state expressed, on a grand scale, respect for Georgia’s mental health patients and Milledgeville’s citizens. What they say about the present is quite different. With more help, the locals could make this site speak more thoughtfully to the future – before it has nothing more to say.

Update: This story has been updated with further comment from DBHDD about the Powell Building, fire reports, and the motive for asbestos abatement.