The Okefenokee Experience: A tri-county effort to boost ecotourism around the swamp

Want to take a walk on the wild side? Head down to South Georgia, home to one of Georgia’s Seven Natural Wonders.

The Okefenokee Swamp — 428,000 acres of wetlands — hosts 424 animal species and 620 types of plants and, famously, around 13,000 alligators. Under a new initiative, the swamp’s special attributes will be used to protect the natural resource and energize the local community. 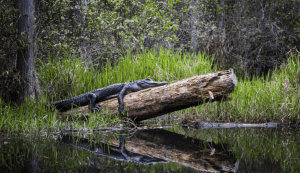 The folks at the Okefenokee Swamp Park (OSP), the nonprofit partner to the Okefenokee National Wildlife Refuge, have crafted a plan to bring attention to the region’s unique natural attractions through tourism, outdoor recreation, education and research — known as The Okefenokee Experience.

Today, the Okefenokee National Wildlife Refuge sees over 600,000 visitors annually, according to the 2017 Banking on Nature report, with $64.7 million generated from the local recreation. The revenue helped create around 753 jobs and solicited $5.4 million in taxes for the surrounding counties.

Under the Okefenokee Experience initiative, the tri-county area around the swamp — Ware, Charlton, and Clinch County — will be home to a new interpretive center, cultural history museum and dark sky observatory.

The Southern Environmental Law Center (SELC) is a primary partner for this initiative, along with teams at nearby state parks — like Laura Walker and Stephen Foster — and local government entities. The idea was conceptualized by Allison Burdette, wife of SELC Senior Attorney Bill Sapp, who saw similarities between the Adirondacks in New York and Georgia’s Okefenokee and brainstormed a plan to follow suit. 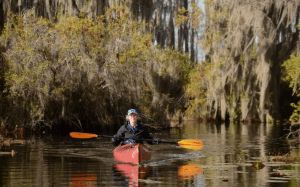 OSP Executive Director Kim Bednarek said the goal is to bring attention to the Okefenokee that’s generally reserved for the state’s coastal attractions, like Savannah which has many natural and cultural landmarks.

The Okefenokee region has a long, tumultuous history with mining. Twin Pines Minerals currently has property within 400-feet of the swamp itself, according to Defenders of Wildlife, awaiting permits from the Georgia Environmental Protection Division.

The Okefenokee Experience isn’t a counter to mining but rather another option for economic prosperity in the rural area. The idea here is that appreciation will lead to stewardship of the natural resource.

“The communities need a more profound array of economic development activities. These communities have not had the opportunity to experience rural prosperity, but we believe it’s possible,” Bednarek said. “We’re not positioning it as ‘You can have [the Okefenokee Experience] or you can have extractive mining.’ But we cannot be putting the incredible natural assets at risk.”

The Okefenokee Experience will include three main stops, encouraging folks to visit South Georgia for several days rather than a quick pitstop.

The Natural History and Ecology Interpretive Center, situated at the Okefenokee Swamp Park in Ware County, will help tell the story of the area’s history, culture and ecology. The 75-year-old site will be revamped and feature live animal exhibits, native plants and, eventually, STEM-centered education programs for K-12 students. 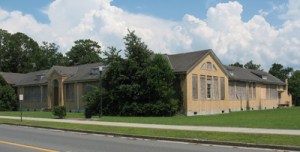 The Cultural History Museum will be housed at John Harris Junior High, an abandoned 1936 school in Charlton County.

For decades, community members have pitched ideas for ways to revitalize the historic building, and while the City of Folkston and the Charlton County Commission have expressed support for this new plan, the County Commissioners are eager to move forward with either renovation or demolition of the site, so the team must act swiftly.

Under the plan, the renovated space will be used to highlight the stories of South Georgia’s indigenous communities and post-Abolition African American migrants. The museum will also feature a training and research hub with a wet lab and library. 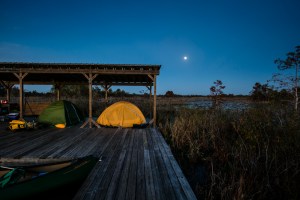 The last attraction of the Okefenokee Experience is the Dark Sky Observatory. Parts of the region are internationally recognized as dark skies, offering views that folks can’t spot in a light-polluted city.

While the location is undetermined, the team plans to install an electronic telescope covered by a dome observatory with a neighboring open observation area.

The Okefenokee Experience will cost an estimated $19 million over a four-year timeline, and Senator Jon Ossoff recently shortlisted the project to potentially receive $13,575,000 in appropriations, although the allocation hasn’t been confirmed.

The team aims to start implementing the project in 2023.

The swamp has long been regarded as a natural wonder and is designated as a Wetland of International Importance and a National Natural Landmark. The swamp was also identified as a potential UNESCO World Heritage (WH) site in 1982 and has remained on the tentative list since 2007.

The WH accreditation is a competitive and lengthy process — the U.S. is home to only 23 sites — but would offer the Okefenokee another level of prestige, designating the swamp as a place of “outstanding universal value.”

If the plan goes accordingly, the South Georgia swamp will receive its WH designation by June 2025. This would be a nice addition to the project, Bednarek noted, but the plans for the Okefenokee Experience aren’t dependent upon the accreditation.

“A World Heritage Site just gives it an added layer of attention and celebration,” Bednarek said. “But you don’t need to have a World Heritage Site to celebrate the culture, ecology, history, people and land of the Okefenokee with high-quality, best-in-class exhibits and interpretive museums.”

She continued: “We’re working collaboratively with the communities around the Okefenokee so they can benefit from increased tourism dollars, increased celebration of the natural resources and create experiences that draw people in from the coast,” Bednarek said. “I hope this inspires people to believe in new opportunities within the natural world of this region.”