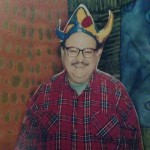 A pin of Ray Barreras decorates a quilt by Debbie Steinmann, a longtime friend who supplied this photo.

For 50 years here, he made the complex look easy, from teaching organic chemistry at the Atlanta University Center and Morehouse School of Medicine, to manning the WABE pledge drive for decades, to a gender-busting, prolific hobby of quilt making. That list only scratches the surface of his service, mostly behind the scenes and without pay, that helped Atlanta diversify.

“Ray is a fountain of energy and motivation, and if he sees an opportunity out there (or a new quilt pattern) he doesn’t think about doing it, he does it,” said former Atlantan Linda Martin, who like me met Ray in the Atlanta Intown Quilters guild in the early 1990s.

Ray left Atlanta in the same style: a real estate agent called him with an offer to buy and tear down the 7-bedroom Virginia Highland bungalow he and wife Trudie bought for $40,000 in 1964 and where they raised their youngest four children.

A spiritual person, he took the offer as a sign: time to go home to Albuquerque. That’s where his blood family is from, and the source of his energy that helped make Atlanta more like family to so many of us.

“I am a servant at heart,” he told me the week before leaving. “It’s a good trait to have, especially as a personality trait, and it came out of my life in New Mexico. Part of it is being Hispanic and taking care of family first, which is something that all cultures have.”

As he learned from his paternal grandmother who made and laid adobes for the family house in New Mexico, service was always about getting your hands dirty or keeping them busy. When his parents and in-laws aged, they came to live with his family. He liked predictability and repetition.

Ray Barreras (right) in a Nov. 1982 Ebony magazine spread on the opening of Morehouse School of Medicine. An organic chemistry professor, he was among the school’s first faculty.

Chemistry was like that too: “I don’t want to just say that something will happen; I want to know why,” he said. That drive led to his PhD at Michigan State and joining the civil rights movement. He was moved especially by the idea that as long as anyone is not free, no one is free. His wife, an artist, drew protest signs with an ostrich sticking its head in the ground. “As long as there are disenfranchised people, we need to fight for what is right,” he told me. “And the other side will be fighting just as hard.”

He accepted a faculty position at Tuskegee Institute, which was experiencing its own student turmoil. Then he came to the Atlanta University Center and Morehouse School of Medicine, recruited as one of its earliest faculty members.

Barreras made an entire quilt start to finish during a Dec. 5, 1998 GPB on-air fundraiser during the airing of the Georgia Quilts: Stitches and Stories documentary. Photo: Linda Martin.

In Atlanta, Ray and Trudie joined the First Metropolitan Community Church of Atlanta because it was friendly to gays and lesbians. “For me, it’s all about love,” he says. “Show me in the Gospel where Jesus said anything about gays. There’s nothing there…. If you look at things in a loving way, you are going to succeed, but it is hard to do the obvious when everyone is saying no.”

When the church set out on mission work in the Dominican Republic, Ray signed up and offered to translate. When Ray and Trudie left Atlanta, they were the church’s oldest members and Ray had made 33 trips to Santo Domingo to support an orphanage, help with water filtration, and teach sewing.

On the home front, they watched more than 100,000 people at Pride weekend last month and remembered marching with fewer than 1,000 and getting hate pamphlets from church members along Peachtree Street.

Barreras shows off a wallhanging patterned after the “quilt of leaves” decorations for the 1996 Atlanta Olympics. Photo by Linda Martin.

His political bent carried over to his quilting, where he often included a bright rainbow fabric as a way to express his support for gays and lesbians. His interest in this age-old craft began after he and Trudie bought a quilt as a gift. When Trudie returned to New Mexico after her father’s death, Ray decided to try what is way too tedious for most people. By the time she returned six weeks later, he had six quilts done.

His capacity for multitasking amazed his quilting friends. His secret: no face time. “Two ladies who are sewing have to turn and look at each other, and that stops the sewing,” he says. “I can keep sewing and carry on the conversation. I just keep going. I don’t lose a dime!” Most of what he makes he gives away, including several to Quilts of Valor, presented to returning troops.

After learning from and critiquing some of the top quilt teachers, Ray started teaching. Most recently, he was leading a class at the Helen Mills Senior Center in Old Fourth Ward. “There’s a lot of black women at Mills and he believes in all of us,” said Naeemah McDonald. “The spirit of Ray is engrained there, and Ray will be missed.”

Ever the iconoclast, he focused on the latest technology, reinventing himself as the Clark Howard of the Georgia quilting scene (where he is also two-time past president of the state council). He is an expert on what tools to buy or avoid, and man enough to wear a patchwork vest.

“All a quilter really needs are needles and thread,” he says. “Guys look for shortcuts.”

At last month’s meeting of the Atlanta Intown Quilters guild, we celebrated his passion, leadership and friendship and gave him a quilt (made quickly of course). Marva Swanson of southwest Atlanta summed up his legacy: “I can’t imagine quilting in Georgia without Ray,” she said to the group before turning to him: “Wherever you go, you leave a dent there just like you did here.”

Ray was so much a part of the community in so many ways that it was easy to take him for granted. When he announced his departure, I realized I knew little about his family and activism. I knew that Trudie’s support gave him the freedom to serve so much and so many.

I didn’t know that his four youngest children went to Grady High School, or that after his oldest son Steve’s death in a car accident, his ashes were scattered in Lake Rabun. Two daughters are married to Navajo brothers in New Mexico. A daughter Toni (in Dunwoody) and son Carlos (Lilburn) remain here.

As the bulldozers head to his house on Drewry Street, the neighborhood has him and other volunteers to thank for its survival. His house was inexpensive partly because it stood smack in the way of a proposed highway. As soon as he bought the house, he joined the volunteers trying to stop the road. The battle finally ended in compromise with the Freedom Parkway in the mid-1990s. No cloverleaf at his house.

Ray and the ladies of the Atlanta Intown Quilters guild at his sendoff last month. Photo by Mary Kimberly.

I also learned that Ray began volunteering at WABE a month before Lois Reitzes went on air; they were neighbors who ran into each other at the Richway grocery store and whose kids attended Grady High School. That was 30 years ago. Turns out Ray was a former violinist (didn’t I say Renaissance?) who had moonlighted on percussion for his college marching band and the Albuquerque Symphony. He had three jobs and went to class as a married undergraduate, and he and Trudie (who met in high school) paid cash for the delivery of their first two children.

Then there’s his involvement in contemplative prayer circles in Atlanta, but by now you’ve gotten the picture of what the Ray Barreras Era has meant to this city and to us who knew him. He returns to the valley where he and his wife grew up, his spiritual home. But before his next trip to the Dominican Republic, he promises to schedule a layover in Atlanta. It just better be long enough for show and tell all that he has made and done since we said goodbye.

Previous Article
By ignoring public funding for the arts, Georgia’s innovation economy suffers
Next Article
Protect young athletes from concussions and blows to the head to avoid Chronic Traumatic Encephalopathy.