"The modern day milkman." (Photo courtesy of The Rounds.)

In the era of online shopping and curbside pick-ups, it’s hard to ignore the mountain of cardboard boxes that accumulate or the plastic bag tumbleweeds.

Instead of the typical barrage of plastic and cardboard that often comes with online orders, The Rounds — launched in Atlanta last month — offers an innovative, low-waste food and home goods delivery service.

According to the EPA, the average American generates 4.9 pounds of waste each day. Paper and paperboard was the most discarded material in 2018, accounting for 23 percent, and plastics were third-most, contributing around 12 percent.

Envisioning a delivery service where nothing goes to waste, University of Georgia alumn Alexander Torrey and his partner Byungwoo Ko co-founded The Rounds in 2019. Starting in Philadelphia, they’ve now expanded their services to four cities.

Here’s how it works: First, place an online order — with options ranging from food, cleaning products and pet necessities. Next, the products are delivered in a canvas bag to your doorstep. Then, the empty bags and containers are later collected for reuse.

The offerings are easier on your wallet compared to the store down the street, ranging from 15 to 50 percent cheaper.

“When you go to the grocery store, things are artificially marked up,” Head of Launch and interim Atlanta General Manager Edward Sun said. “Thirty to 40 percent of what you’re paying at the grocery store is the name brand — the marketing and the packaging. So we eliminate a lot of that, and we source things directly from suppliers.”

Nearly 40 percent of the products are locally-sourced, like Emerald City Bagels and Yellow Chrome coffee, so customers are also supporting Atlanta businesses through their purchases. The Rounds doesn’t currently offer perishable foods, although Sun said those will be added in the future to offer an “all-encompassing” service. 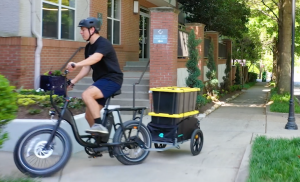 Around 75 percent of deliveries are dropped off via e-bike. (Photo courtesy of The Rounds.)

Much like your modern milkman, the company strives for a “closed-loop system” by sanitizing and reusing the jars and tote bags for the next deliveries.

According to The Rounds, a year-long membership eliminates roughly 50 pounds of single-use plastic and cardboard waste.

On the back-end, the team tries to be as low-waste as possible by getting their deliveries in crates and bins rather than boxes, and recycling or reusing all materials. “We don’t 100 percent eliminate packaging waste but we reduce it significantly,” Sun said.

In another effort to tread lightly on the Earth, most of the delivery team opts to hit the town on e-bikes rather than cars.

“We’re all about zero waste so we should be zero emissions, as well,” Sun said. “We can take advantage of the BeltLine, and there’s a decent amount of bike lanes. It’s better for the environment, and allows us to be a lot more efficient.”

He added: “Being sustainable is not easy, especially in a city as large as Atlanta. So we bring that to your home.”

Previous Article
The Conservation Fund Is Committed to Equitable Park Development in Atlanta
Next Article
Navigating Child Care During a Pandemic: Caregivers Tell Their Stories