The State of Greenbriar Mall: Is there a future?

With its anchor retail store gone, the owners and local officials try to come up with options to keep its doors open. In this third and final installment, SaportaReport looks into what is in store for Greenbriar Mall.

As Atlanta’s first major mall is without a major department store retailer in its 50 plus-year history, shoppers are worried how much longer the landmark will remain open.

Sherry Williams says Greenbriar Mall is a “major economic engine” for the Campbellton Road Corridor, so when her favorite store closed its doors earlier this month, she wasn’t sure if other businesses were going to do the same.

In January, Macy’s announced closing 45 locations, including the one inside Greenbriar Mall. This was the only Georgia location to be closed. Many employees lost their Greenbriar jobs, but many have been relocated to other stores throughout the region. 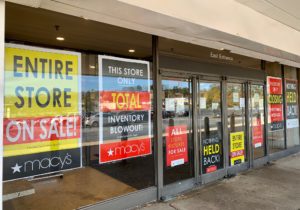 Signs advertise the closing of Macy’s, one of Greenbriar Mall’s anchor spaces. Photo by Kelly Jordan

Although the store’s closing has been a disappointment for many, as mentioned in part two of our series, the mall’s owner was excited to part ways with the iconic retailer.

“This gives us a tremendous opportunity to do many different potential options with the Macy’s building,” said the owner of Hendon Properties and Greenbriar Mall, Charlie Hendon.

With the new ways people shop changing through the years, shopping malls worldwide are seeing a quick demise.

An example of this is in Tuscaloosa, Ala., where neighborhood shopping plaza, McFarland Mall, was demolished in February.

Developers told the community that they plan to build an entertainment and sports complex that will have something for everyone of all ages.

Williams has seen the “broken record” of business after business leaving Greenbriar and this time, she wants to be proactive to find out what opportunities are ahead for her neighborhood shopping district.

“So my thing is, what is the plan?” Williams asked. “I’m sure they’ve had conversations.” 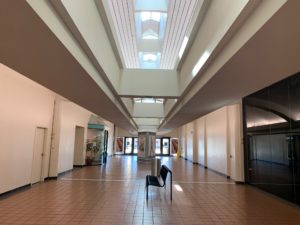 Hendon tells SaportaReport that his company continues to be “very bullish” on the property and thinks that “it’s got a bright future.”

He mentioned that two significant retailers had toured the old Macy’s structure, one as recent as a few weeks ago.

Both Hendon and Overstreet confirmed plans of projects that will be taking place outside of the mall in unused parking lots.

Hendon confirmed that a charter school is under contract and will build a free-standing campus on the Greenbriar grounds.

Additionally, both stated an agreement is in place for a mixed-use residential complex with up to 488 units to provide assisted living for seniors and affordable housing for city workers like firefighters and teachers.

Hendon said that both projects are under contract and expected to close sometime this year. 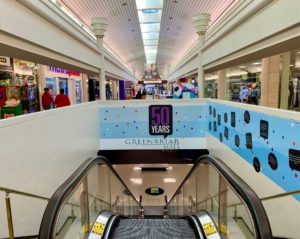 Hendon says it’s a long process to get another retailer in that space but they’re working on making that happen.

One thing is clear – Greenbriar Mall is changing. While its future will certainly be different from its past, there’s much to look forward to.