The ‘Texas’ locomotive on the move to a new life 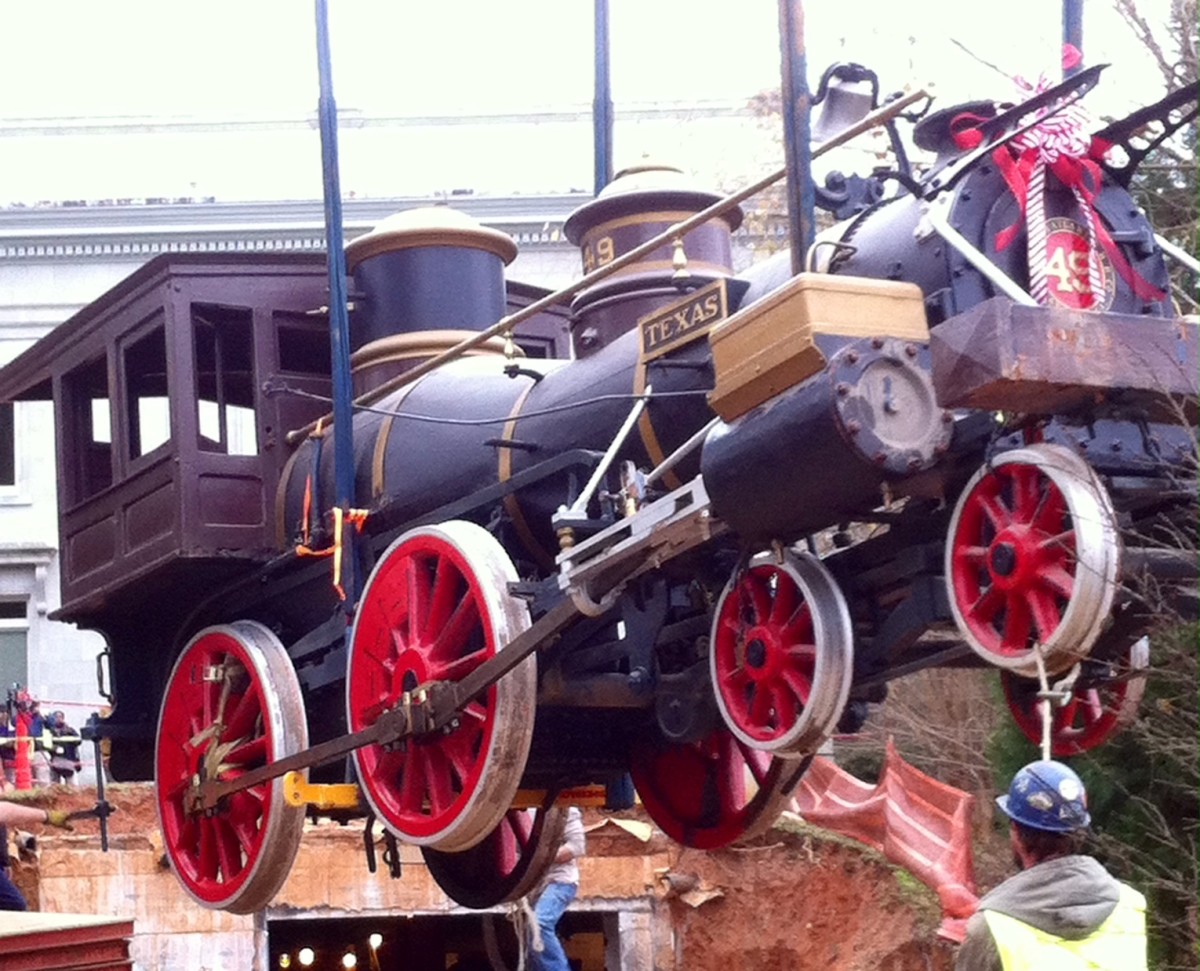 Atlanta’s most notorious locomotive took to the skies on Monday afternoon.

That was when Atlanta History Center began the delicate process of removing the 1856 Texas locomotive from the Cyclorama building as part of an agreement with the City of Atlanta to restore and relocate “The Battle of Atlanta” cyclorama painting and other Civil War artifacts.

It was all part of a three-way agreement between the City of Atlanta, the Atlanta History Center and Zoo Atlanta reached in 2014.

The Atlanta History entered into a long-term lease with the City of Atlanta to restore, maintain and house the cyclorama painting. And the Zoo will be able to take over the Cyclorama building and turn it into a special events facility and expand the zoo property by five acres.

The move of the Texas ended up being a little more complicated and taking a little bit more time than planned. 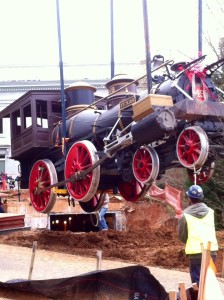 The original specs for the Texas said that it weighed about 25,000 pounds. But shortly before noon – when a large crane with pulleys first tried to lift the 51-foot-long locomotive out of hole in the ground on the north side of the Cyclorama building – riggers realized it weighed at least 36,000 pounds.

So they had to get bigger pulleys that could handle the extra weight. Finally late in the afternoon, the Texas was lifted for a brief time into the air before being placed on open-air trailers for a road trip up I-85 to Spencer, N.C.

That’s the location of the N.C. Transportation Museum, where the Birmingham, Alabama-based Steam Operations Corp., nationally recognized experts in restoration of steam locomotives and other historic rail equipment, will conduct the first major restoration ever of the 159-year-old Texas.

A couple of dozen spectators – a combination of history buffs, railroad aficionados, media and community residents – came by to witness the Monday move. Most did not wait until the Texas came out of the ground, but fortunately SaportaReport photographer Kelly Jordan was there to capture history being made.

The Texas is expected to return to Atlanta at the end of 2016 where it will be on permanent display at the Atlanta History Center.

Knowing there was quite a bit of interest in the Texas, the Atlanta History Center prepared a detailed release in anticipation of the move.

Here is a copy of most of that release:

The public will be able to witness the extensive process at the Spencer Shops, an historic rail facility that is now part of the 57-acre N.C. Transportation Museum. Spencer Shops was once Southern Railway’s largest steam locomotive repair facility and remains equipped to handle the largest of restoration jobs.

In Spencer, 295 miles northeast of Atlanta and 45 northeast of Charlotte on the Southern Railway mainline between Atlanta and Washington, the Texas will be the subject of detailed historic research spanning many months before it undergoes restoration. When research is complete and restoration begins, visitors to the N.C. Transportation Museum can enjoy public access and viewing opportunities of the work. 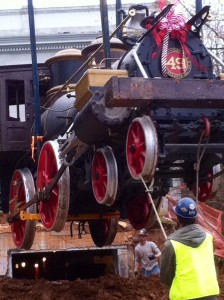 Texas locomotive on the move (Photo by Kelly Jordan)

Famed for its role along with the locomotive General in the Civil War’s Great Locomotive Chase in 1862, the Texas is expected to return to the Atlanta History Center in late 2016.

It will be permanently featured in a custom-built glass-walled enclosure that will put the prized artifact of Atlanta’s rich railroading past on prominent display, where it will be illuminated at night and clearly visible from West Paces Ferry Road at all hours. The glass enclosure housing the Texas will connect the Atlanta History Museum to the new Lloyd and Mary Ann Whitaker Cyclorama Building, which will house The Battle of Atlanta painting, which is estimated to open late 2017.

“After many years of limited view in the basement of the Cyclorama building in Grant Park, we are putting the Texas in a place where it is going to be front and center,” History Center Vice President of Properties Jackson McQuigg said. “This engine that has been at times forgotten in its long lifetime is going to become a focal point.”

The Texas and the General, the star attraction at the Southern Museum of Civil War and Locomotive History in Kennesaw, Georgia, are the sole surviving locomotives that once served the Western and Atlantic Railroad (W&A RR), a company central to Atlanta’s humble beginnings.

Atlanta was established in 1837 as the terminus of the new railroad line that ran from what was then known as Terminus northwest to Chattanooga, Tennessee. The city grew up as a railroad town and mushroomed to become one of the nation’s most important transportation centers.

“As railroads are Atlanta’s reason for being, this steam engine is an icon of Atlanta’s founding and growth as the Gate City of the South – the commercial center of the Southeast,” Atlanta History Center President and CEO Sheffield Hale said. “The Texas locomotive symbolizes Atlanta’s longtime relationship with railroads and the city’s importance as a hub for people, commerce, and ideas. No artifact can be more important for telling the story of Atlanta’s beginnings than this Western & Atlantic locomotive.”

Hundreds of locomotives serviced the W&A RR and its successors, yet all but the Texas and General were scrapped over the decades. Both engines were saved because of their roles in the 1862 Great Locomotive Chase, when Union Army loyalists commandeered the General from the town of Big Shanty (now Kennesaw) and took it north toward Chattanooga, wreaking destruction to the W&A line, until finally being caught by Confederate forces who had pursued aboard the Texas.

Though the Great Locomotive Chase became the subject of a popular 1956 movie of the same name and books, Atlanta History Center historians believe the Texas has even greater importance as an artifact that speaks eloquently and authentically of Atlanta’s beginnings.

The Texas was produced in a classic 4-4-0 design (indicating an engine with 4 leading wheels, 4 driving wheels and 0 trailing wheels) – a type so popular it was called “American” – by New Jersey locomotive maker Danforth, Cooke & Co.  The 4-4-0 design was so ubiquitous that it was placed on Atlanta’s first official seal in 1854, two years before the Texas was put into service.

The Texas pulled passenger and freight trains in Atlanta and around North Georgia for 51 of the region’s most formative years, retiring from service in 1907.

“We want to show it as the hard-working engine that it was,” Atlanta History Center Senior Military Historian Gordon Jones said of the planned restoration, “not just as one of the engines in the Great Locomotive Chase.”

For the first time, the Texas will be examined as a historic artifact, part by part and inch by inch, after arriving at the N.C. Transportation Museum.

Like any locomotive of long service, it has been significantly altered over the years and features many replacement parts, including its wheels, tender and boiler. Along the way it was converted from a wood-burner to coal-fired. Even its name was changed, to the Cincinnati, after the war. 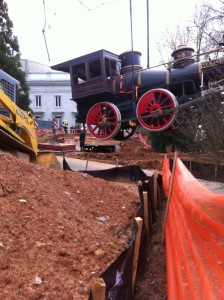 Preservation issues that will be addressed in North Carolina include corrosion in the tender and under the boiler jacket, similar rot in the smokebox and broken springs. While the restoration will not turn the Texas into a working engine again, the History Center intends to make it mechanically sound.

As for its appearance, it will undergo historical paint research at Spencer by the restoration team before any decisions are made about color, numbering and other matters of appearance.

“What it is going to look like is the easy part,” McQuigg said. “We can debate that but it’s just paint. We want to address the rust and structural issues, the things that have been ignored over the years in favor of cosmetic restoration.”

The History Center has dedicated $500,000 to Texas conservation.

A workhorse from the end of the Civil War through the early 1900s, the Texas was rescued from the W&A yard in Atlanta where it was heading for scrap in 1907. In 1911, it was moved to an outdoor shelter in Grant Park. It finally occupied the building erected in the park to house it and the cyclorama painting in 1927.

In 1936, as part of a Works Progress Administration-funded restoration of the cyclorama painting, Atlanta historian and artist Wilbur G. Kurtz gave the Texas a cosmetic restoration, replacing the smokestack and pilot with reproduction parts and re-painting the entire engine. It was painted again between 1979 and 1982 during renovations to the Cyclorama building that turned the basement into a ground-level main entrance.

There are no specific records of what the Texas looked like brand new in 1856, but the History Center has extensive materials in its permanent collection documenting the engine’s early 20th century appearance, notably Kurtz’s drawings and photographs. 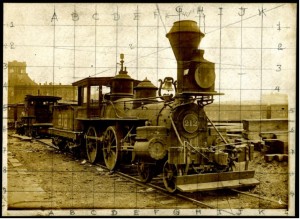 On the grounds of the N.C. Transportation Museum, the locomotive itself is expected to yield many clues about the direction restoration should take, Senior Military Historian Jones said. “We will let it tell us what it can tell us, teach us what it’s been through,” he said.

On the Atlanta History Center’s 33-acre Buckhead campus, construction on the Lloyd and Mary Ann Whitaker Cyclorama Building began in early December 2015 and is expected to be complete in late 2016.

Connected to the Atlanta History Museum’s newly expanded Louise Richardson Allen Atrium by the glass enclosure where the Texas will be showcased, the 23,000-square-foot Cyclorama addition will rise on the History Center’s northeast side, near the corner of West Paces Ferry Road and Slaton Drive.

The History Center intends to restore The Battle of Atlanta painting to its full hyperbolic or hourglass shape, size and overall height, and to re-create the 128-year-old painting’s original visual perspective, both of which have been lost for nearly a century.

The plan is to open the building in late 2016 to allow the public to view the ongoing restoration of The Battle of Atlanta painting, with a full opening and dedication following in 2018.

Once the painting has been fully restored, Atlanta residents, tourists, and other visitors can see The Battle of Atlanta as it was originally intended to be viewed when it was painted in 1886.

“There are only 17 surviving cyclorama paintings from the 1880 to 1920 periods and only four of these are in North America. Many cycloramas were cut apart or left outside to rot when they could no longer draw a paying audience, but because The Battle of Atlanta was saved by the City of Atlanta in the 1890s, it is one of the most intact examples in the world today,” Senior Military Historian Jones said.

“Over the years The Battle of Atlanta has suffered from a cycle of deterioration and crisis followed by emergency restoration,” Jones continued. “Now, we can end that cycle once and for all with the History Center’s ability to fund the maintenance and preservation of this national treasure indefinitely.”