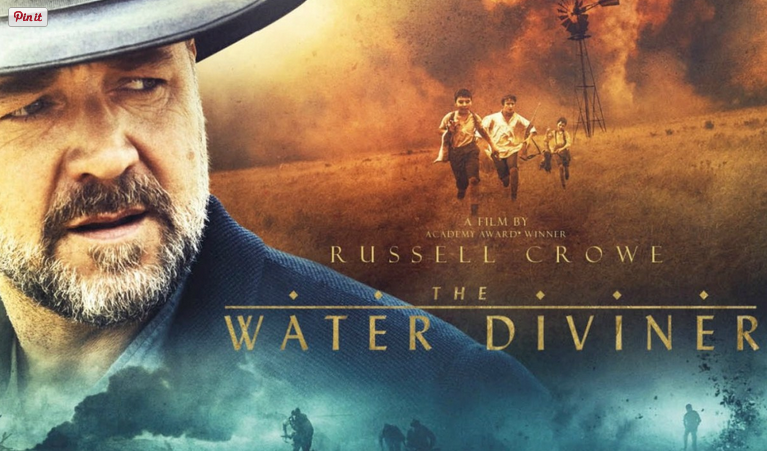 The Water Diviner” put me in mind of the Coleridge quote “Water, water everywhere, nor any drop to drink.”

There are fine things everywhere you look in this Australian historical drama.  Yet, when it’s over, you’re still thirsty for a better movie.

Russell Crowe stars as Joshua Connor, an Australian farmer with a gift for finding water (as we see in the opening scene). Now he wants to find his three sons who went off to war four years earlier. Unfortunately for them, the war was World War I and the battle they found themselves in was Gallipoli, one of the bloodiest massacres in history.

Tens of thousands of Australian and New Zealand troops died there. And while the Turks won, they suffered heavy losses as well. No wonder Major Hasan (Yilmaz Erdofan), the Turkish military officer who offers to help Connor, describes the place as a mass grave.

When Connor arrives in Turkey, his “own people,” i.e., the British, for whom his sons went to fight, are singularly unhelpful. He’s a bother. Worse, he’s an Aussie bother. 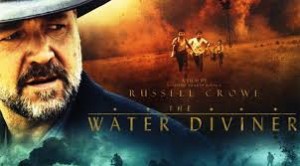 Besides, civilians aren’t supposed to muck up the works when it comes to military protocol. Gallipoli – where both Turks and Brits are still looking for whatever body parts they can find to give a proper funeral – is off-limits.

Connor, however, is not a man to be stymied by rules. He goes to Gallipoli on his own, and Hasan decides he’ll do what he can. Asked by another officer “why change everything for a father who can’t stay put?” Hasan replies, “Because he’s the only father who came looking.”

This sentiment is key, because it embodies the many things the picture – Crowe’s directorial debut – does right.  It explores themes of war, loss, guilt and obtuse bureaucracy with an old-fashioned respect. That’s “old-fashioned” in the best sense of the word.

However, the movie also goes off in too many directions. Connor’s quest is complex enough on its own. But there’s also the civil conflict that’s broken out in the post-war aftermath. And the melancholy relationship between Connor and his wife who’s been driven mad with grief over the loss of her boys. Refusing to accept their deaths, she insists Joshua read bedtime stories to them – that is, to their empty beds – from the “Arabian Nights.”

All this distracts from Connor’s own conflicted feelings. Did those nightly tales of a romantically exotic Turkey, full of genies and magic carpets, send his sons to a war that wasn’t really theirs to fight? And did he encourage their signing up because he, too, was seduced by these fanciful fables?

Speaking of fanciful, the picture claims to be inspired by a true story.  According to a couple of reviewers, the true story was this: Someone came across a cache of old letters in which a British officer assigned to post-war Turkey mentions “One old chap managed to get here from Australia, looking for his son’s grave.”

Skimpy, yes, but still enough to “inspire” a film and as I said, “The Water Diviner” is at its best when it sticks closest to that theme. Alas, Crowe, the director, can’t resist giving Crowe, the actor, a romantic interest (the wife is beyond help). The minute he arrives in Turkey, Connor is conned by an “adorable” urchin who confiscates his luggage and leads him through the crowded streets to the somewhat run-down hotel run by his drop-dead gorgeous mother (Olga Kurylenko, who looks about as Turkish as Angelina Jolie.)

She is also, conveniently, a widow. So she and Connor make eyes across the reception desk while her brother-in-law insists she be a true Ottoman woman (i.e., marry him, as it says in the Old Testament, and I’m guessing, perhaps, the Koran).

This storyline is annoying as hell, but it’s made triply so by Kurylenko who might be he most vapid and talent-deprived actress working in movies these days. You may remember her from Terrence Malick’s   abysmal “To the Wonder.”

If Crowe had excised this syrupy subplot, “The Water Diviner” would have had much more impact. But once a movie star, always a movie star. And nothing becomes a movie star like being cast opposite a beautiful woman fifteen or so years younger than you are. It’s pretty much a Movie Star Rule.