A scene from "The Wonder."

The sizable wonder at the center of, “The Wonder,” is its star, Florence Pugh. Her perfectly-pitched performance holds together a film that often feels like a horror movie while flirting with questions of faith and the nature of miracles.

A scene from “The Wonder”

Her assignment? Not to intervene or heal, but to witness the seemingly inexplicable phenomenon of a young girl, Anna (the excellent Kila Lord Cassidy), who hasn’t eaten for four months. The child is weak, but otherwise healthy. Is her survival divine grace or a cleverly orchestrated hoax? And if the latter, by whom? Anna? Her family? Or a council of village elders (all male, of course) who may be angling for their first saint since the Dark Ages?  After all, saints beget pilgrimages and pilgrims bring money.

The tension between religion and science is further underscored by the nature of Lib’s assignment. She trades shifts with a nun who’s also been instructed to make sure nothing passes Anna’s lips. 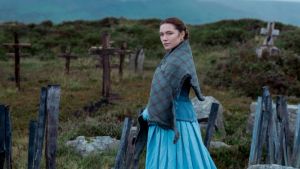 A scene from “The Wonder”

So, the village has its baggage. However, so does Lib, as we learn from her nightly ritual – a spoonful of something (laudanum?), taken in the presence of a pair of baby booties. The villagers are always telling her she’s “not like us” and “she wouldn’t understand.” Still, she knows grief. And loss.

“The Wonder” is every bit as weird as it wants to be thanks to Pugh’s astonishing work and to its director, the brilliant South American Sebastian Lelio, an Oscar winner for “A Fantastic Woman.” (His best-known American film is “Gloria Bell,” starring Julianne Moore). Lelio leans into the picture’s implied “The Exorcist” trappings while simultaneously honoring its issues with the mysteries of faith.

The result is a bit like “Agnes of God” meets “The Conjuring” franchise. 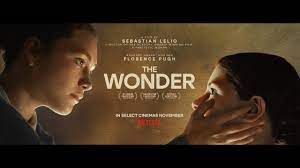 Movie poster for “The Wonder”

That the ultimate explanation is more Dr. Phil than demonic (or divine) weakens the film. But Pugh, the most exciting performer in recent memory, puts up a helluva fight and brings us into the “The Wonder’s” self-prescribed world ­– a world, that is, in which a starving girl could be a sign from God.

Oddly, “The Wonder” also brings to mind “The Miracle Worker,” the 1962 movie about Helen Keller and her teacher, Annie Sullivan, which won Oscars for Pattie Duke and Anne Bancroft.

There, too, an outsider/skeptic is asked to “heal” a wild child. Or, perhaps more accurately, a child whose personal experience is beyond our understanding. Such bonds are the miracle. God has nothing – or everything? – to do with it.

“The Wonder” can be viewed on Netflix and other streaming services.