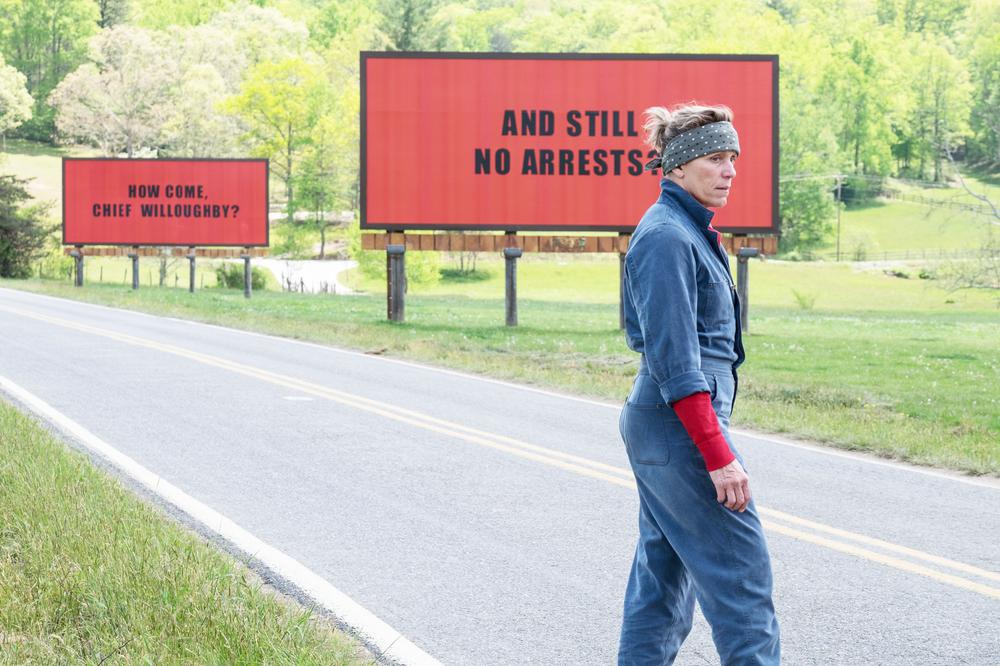 There are still those of us old enough to remember the sequential side-of-the-road billboards for Burma Shave or South of the Border. They were pseudo-cheeky, pretty stupid and, well, impossible to ignore. Even if you were going 80 mph.

In “Three Billboards Outside Ebbing, Missouri,” Mildred Hayes (Frances McDormand) takes something of the same approach. She rents three peeling billboards on a deserted road and plasters her own very personal message across them. In order, they read: Raped While Dying; And Still No Arrests; How Come, Chief Willoughby? 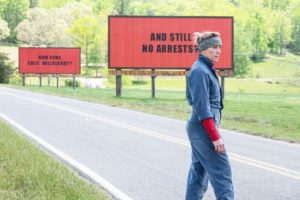 The victim is Mildred’s daughter, raped and murdered seven months earlier. Sheriff Willoughby (Woody Harrelson) is the local chief of police, a decent enough man with more on his mind than an unsolved case. He’s also dying of cancer.

The citizens of Ebbing are sympathetic to Mildred’s grief, but most believe she’s gone too far. That’s what her ex-husband (John Hawkes) thinks. So does the local minister. And Willoughby’s ineffectual, occasionally racist, yet exceedingly loyal deputy, Dixon (Sam Rockwell).

But Mildred won’t back down. She has no sympathy for Willoughby, no respect for her ex and no interest whatsoever in what Dixon thinks.

There are repercussions — some expected, some not.  Mostly, this is the sort of picture Jonathan Demme or Preston Sturges specialized in. That is, gather together a bunch of offbeat characters and place them in close proximity to each other. (By the way, there is no Ebbing, Missouri; basically, it’s just down the road from Twin Peaks and Peyton Place or even Bedford Falls.)

But Martin McDonagh, an Irishman best known for the movie, “In Bruges,” and such plays as “The Cripple of Inishmaan,” doesn’t need a real place to unroll his story of vengeance, grief and regret.

Plus, “Three Billboards” is often quite funny, thanks to the interplay among these engaging oddballs (add in Peter Dinklage from “Game of Thrones,” who describes himself as “a used car salesman with a drinking problem”). 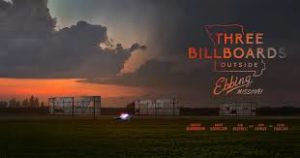 And it can be touching. In one scene, as Mildred is tending to the flowers she’s placed beneath her billboards, a doe shyly approaches. “You aren’t trying to make me believe in reincarnation?” she gently asks. “You’re pretty, but you’re not her.”

McDonagh wrote the move especially for his star and it shows. We’ve seen bit and pieces of this performance before. But McDormand’s ferocity is still formidable; she’s as implacable as Antigone facing down King Creon over the right to bury her dead brother.

Harrelson gives a nuanced portrayal that engages our sympathy even before we learn he’s sick. But the one who comes close to stealing the picture is Rockwell. Pudgy and pugnacious, his hair shaped in an unflattering bowl cut (think, early Sonny Bono), he’s a limited little man who, against all odds, discovers something in himself. Something worthwhile and, perhaps, just a tiny bit heroic.

One nagging problem: the filmmaker doesn’t know the territory. He might as well be a New Yorker or an Angelino, trying to understand fly-over Middle America. So, yes, there is some obvious stereotyping that weakens the picture.

That said, “Three Billboards” holds you as so few movies do these days. And it does so with the basics:  character, dialogue and emotion