(This story has been updated with results of new poll on voter sentiment about transportation sales tax.)

Metro Atlanta needs to improve its transportation systems or else the region will languish.

The proposed 1 percent sales tax to pay for such improvements is not the perfect solution, but is the best answer the region has now and is likely to face in the future.

These two concepts were among the take-aways from the Friday discussion at the Sustainable Atlanta Roundtable, sponsored by Southface. The panelists were Decatur Mayor Bill Floyd, ARC Director Doug Hooker, and MARTA GM/CEO Beverly Scott – all of whom had a hand last summer in formulating the project list for the proposed 10-county sales tax. The vote is July 31.

From the audience, Ray Christman helped frame the morning’s final discussion with his observation that he’s puzzled by the lackluster public support for the proposed sales tax, and the road and transit upgrades it would fund. Christman said these projects have been on local wish lists for years, and yet people now are bucking at the prospect of having them in exchange for a sales tax.

Christman brings a long perspective to the transportation campaign. Last summer, when he led Livable Communities Coalition, Christman lobbyied hard for transit funding to be provided by the proposed sales tax revenues. Now he’s a senior vice president with Trust for Public Land.

Floyd responded he thinks the public doesn’t trust government in general to be responsible stewards of their tax dollars. Floyd said he disagrees with that outlook, and said the onus is on the government – if the tax is approved – to show results within five to six years.

Hooker said the sour economy is a factor in the lean public support for the proposed 1 percent sales tax. When people are fearful of the future, he said, they become very defensive of the possessions they have today.

Scott suggested the advocates are ceding ground to their opponents because they’re tired. Years ago in Houston, Scott said, she watched a transit proposal fail because advocates didn’t have enough energy in the final days of the campaign to push through the opposition and win.

Support for the proposed sales tax has dwindled from May to July 11, according to polls conducted on behalf of WSB-TV.

Support has dropped 8 percent, to 33 percent, and opposition has increased 10 percent, to 56 percent, polls showed. The margin of error is plus/minus 3 percent.

The panel discussion, moderated by Maria Saporta, editor of saportareport.com, covered a lot of ground over the course of 90 minutes. Other topics included:

In Hooker’s closing remarks, he compared this moment in Atlanta’s history to that of Birmingham, Ala. Some 50 years ago, Birmingham’s leaders did not take the steps needed to convince Delta to make Birmingham its Southern hub.

“Atlanta did, and it’s made all the difference,” Hooker said. 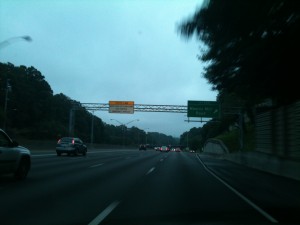 A proposed transit line in the I-75 corridor between Atlanta and north Cobb County could ease congestion. Traffic on southbound I-75 was light Friday at 7 a.m., approaching the Moores Mill Road, which is in keeping with a recent report by GRTA that showed average trip times decreased at the start of the recession. Credit: David Pendered