For George Miller, the filmmaker who’s had a hand in such fantastical beasts as Babe, the sheepherding pig, and Imperator Furiosa (aka, Charlize Theron), the one-armed warrior, the tale of an academic and the djinn she accidentally releases while at a conference in Istanbul, is almost business as usual.

That “Three Thousand Years of Longing” isn’t “I Dream of Jeannie” shouldn’t surprise anybody. That it ultimately doesn’t work better than it does, should. The movie isn’t a chore, and it’s got enough visual verve to keep us interested. Plus, the academic and the djinn are played by two of the most charismatic actors around: Tilda Swinton and Idris Elba. But like Terry Gilliam at his worst (and best), the picture wobbles tonally, shifting gears between a romantic, almost naïve fairy tale and a more sophisticated, slightly cynical phantasmagoria of stories within stories.

Alithea (Swinton) is a “narratologist,” i.e., an expert in the world mythologies that have tied civilizations together since, well, forever. At a crowded bazaar, she buys an antique vase and later, back in her hotel room, she cleans it off with her electric toothbrush. Which turns out to be same thing as rubbing a magic lamp. Which is what the vase is.

And Shazam! (or whatever they say these days). She’s summoned a jinn (Elba) whose only wish is to grant her three wishes so he can finally get back to wherever it is genies go when they aren’t imprisoned in bottles. But Alithea is a trained professional, so to speak, and she knows that the whole three wishes deal is a cautionary tale that often rebounds badly on the wish-er.

What ensues is a kind of back-and-forth between the two, with him telling her his history (three thousand years’ worth) and she withholding her wish power. His stories touch on everyone from Solomon and the Queen of Sheba to Suleiman the Magnificent to a 16th-century genius inventor imprisoned in her own kind of golden cage, i.e., as a woman, she doesn’t stand a chance to fulfill her potential, even with a genie on her side. 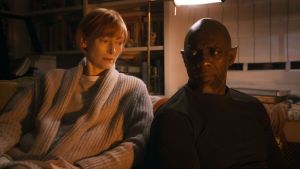 There’s a Momma’s boy with a taste for plus-sized concubines (hence a Fellini-esque harem of nekked Lizzo-style women). And a beautiful white stallion with a fetchingly pink mane and tale. And a seductively demonic musical instrument.

But instead of drawing us in, the picture keeps us in a cycle of the uses and misuses of enchantment. We want to be enthralled. Instead, we are…empathetic? Alithea and the djinn are both trapped, in their own solitary ways, and while we root for their potential romantic involvement, the “longing” promised by the title never kicks in.

Miller is now in his late 70s, and the fact that he can pull off anything like this – or almost pull it off – is pretty darn impressive. Your enjoyment, I guess, is just how far you’re willing to go on a flawed magic carpet ride.