George Clooney and Julia Roberts star in "Ticket to Paradise"

Tracy and Hepburn, they ain’t.

Actually, they aren’t even Frankie (Avalon) and Annette (Funicello). 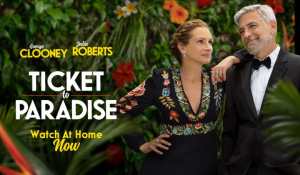 Movie poster for “Ticket to Paradise”

Granted, Julia Roberts and George Clooney are huge stars whose on-screen presence has an iconic glow. But when you think about it – when you go back and look at their filmographies – you’re reminded that one thing they don’t have is a shared history of romantic comedies.

The “Ocean’s” franchise insists on their being made for each other, but the pictures themselves are inflated bromances, more interested in Clooney and Brad Pitt as a couple.

Similarly, the implied couple-ness creeps around the edges of “Money Monster,” but it’s not what the movie is about. And in Clooney’s directorial debut, “Confessions of a Dangerous Mind,” she is possibly a figment of a game-show host’s imagination. A scene from “Ticket to Paradise”

In a sense, movie-lovers have filled in a fictitious history of the two as a towering romantic couple when, in fact, it just isn’t so.

Which brings us to “Ticket to Paradise,” a tedious time-warped trifle in which Roberts and Clooney play Georgia and David, longtime divorcees who put aside their mutual animosity in order to break up their daughter Lily’s (appealing Kaitlyn Dever) wedding.

She’s a newly-minted lawyer who, before she settles into her legal career, goes with her best pal Wren (the equally appealing Billie Lourd) to Bali. There, in a credulity-straining meet-cute, she falls for Gede (Maxime Bouttier), a hunky local seaweed farmer.

Forget lawyering. Hardly a month later, Lily is getting married and moving to Bali. She invites her long-estranged parents to the wedding, and the pair conspires to put aside their differences in favor of a mutual goal: prevent their daughter from making the same mistake they did. 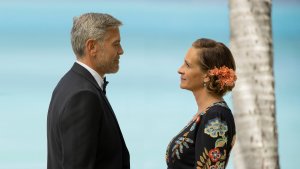 A scene from “Ticket to Paradise”

Skimming over the implicitly racist aspect of their objection, “Ticket to Paradise” gamely tries to convince us of its frothy good nature.

But Clooney and Roberts’ considerable star-shine can only take things so far.

And their transformation from bickering exes to flirtatious maybe-reuniteds is forced and frankly, a little boring. By the time she’s smiling indulgently as he messes around playing soccer with some local kids, you may find yourself wondering about Clooney’s David: adolescent hi-jinks or incipient early-onset Alzheimer’s?

Then you realize you don’t care. Sometimes frothy is only so much foam.