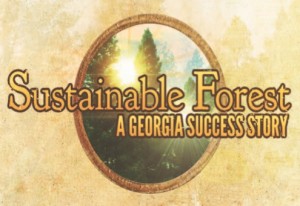 “Sustainable Forest: A Georgia Success Story” is the centerpiece of the public awareness campaign that was launched Tuesday by advocates of the state’s timber industry.

The campaign is led by the Georgia Forestry Association and includes a speakers bureau that is to take the message to Rotary Clubs, chambers of commerce and other such groups around the state.

The effort is unfolding as the state’s struggling timber industry has been promoted over the past nine months by parties ranging from Gov. Nathan Deal to the University of Georgia to Rolling Stones keyboardist and Georgia tree farmer Chuck Leavell.

Timber prices remain severely depressed. Some segments have barely recovered from losses that in some cases were greater than 30 percent during and since the recession.

Tuesday’s event was intended to talk up the use of wood products, and to point out the sustainable farming practices that encourage harvesting in ways that protect the land and use as much of the wood product as possible.

All these interested have seen their wood products sectors suffer losses.

The price for southeast pine saw timber in the first quarter of this year was $24.61 a ton. That price is up 46 cents from the same period of 2012. But it is down from a peak of nearly $40 a ton in 2007, according to Timber Mart-South, a quarterly report of timber prices now affiliated with UGA’s Warnell School of Forestry and Natural Resources.

The program at Georgia-Pacific highlighted seven benefits of sustainable forestry, which will be the message spread across the state via the speakers bureau. The headlines of the program include:

Over the past nine months, the timber industry has been the subject of significant outreach by major voices.

Just last week, Deal was in Savannah to celebrate the 75th anniversary of the Herty Advanced Development Center. The center was named to honor the pioneering chemist Charles Herty, whose work helped create the pulp and paper industry in the southeast.

In March, the governor joined Leavell at the Capitol to announce results of a study that shows Georgia’s privately owned forests provide an economic value of more than $37 billion a year. The study was conducted by UGA’s Warnell School and released by the Georgia Forestry Foundation.

In February, UGA’s Center for Forest Business hosted its annual Timberland Investment Conference. Programs discussed the impact of the housing slump, domestic investment outlooks and global competition for an audience comprised of some 500 investors, landowners, lenders and real estate interests – all of whom traveled from a dozen countries.

And last August, Deal signed an executive order that expanded the state’s ability to use Georgia-grown timber to meet “Green Building” standards in state buildings. State officials have until July 1 to identify and submit to the governor’s office all state policies that are not compliant with the executive order.