Scene from "Together" movie

Move over, George and Martha. Make room for the “Together”’ – He (James McAvoy) and She (Sharon Horgan) who deserve their own place in the annals of toxic cinematic relationships. 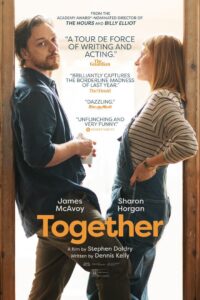 Movie poster of “Together”

However, unlike the famous pair from “Who’s Afraid of Virginia Woolf?”, these two don’t need to make up a fictitious son to tear each other to pieces. They have a kid. A real kid. A strangely remote and watchful little boy named Arthur (Samuel Logan).

Instead, what He and She have to keep each at the other’s throat is the very real danger of COVID-19.

“Together,” which was originally conceived for the stage, begins in March 2020.

Though not married, He and She have been together long enough to conceive and raise Arthur. More to the point, they’ve learned each other’s emotional topography – to the point that almost every sentence is a reproach, a dark joke or a verbal shiv between the ribs.

The couple is relatively well off – yuppies living on the outskirts of London in a rather picturesque cottage. He’s made his money off something appropriately digital while she’s a do-gooder involved with various charity fundraisers. Now they find themselves trapped in the same house with no one to talk to except each other.

And us. The film’s inherent theatricality manifests itself in He and She’s constantly addressing us directly. Because the dialogue is so razor-sharp (and darkly funny) and the actors are so very good, it works.

The movie is divided by months during which their relationship progresses and regresses while the count of COVID deaths in the UK steadily rises. Dennis Kelly’s script touches on everything from early hoarding of toilet paper to later moral questions of whether to jump the vaccine line and get a shot before you are supposed to.

While trimming the Christmas tree, He and She coyly reveal they’ve rediscovered their sex life. They hash over a couple’s retreat and how He happened to eat some poisonous mushrooms (accident or…?). She struggles with her dementia-stricken Mum’s death, which she had to watch on FaceTime. He worries about his company going down the drain.

And that comes out during the first month of lockdown.

There’s pandemic humor, too, cracks about macramé or learning to play the banjo. And strangely accurate minor observations – like how clear the roads are during a plague. 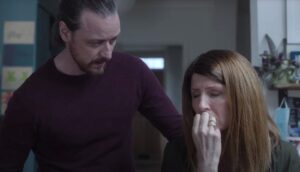 Scene from the movie “Together”

Little Arthur is like a ghost. Or perhaps a premonition. He doesn’t interact with his parents until the very last scene, yet he is very much present. The cottage’s walls are plastered with his artwork. He is somehow both essential and extraneous. But the very fact of his existence, we gather, is the main reason they are still, well, together.

Their banter, riveting and unsettling as it is, can occasionally verge on the tedious, simply because there’s so much of it.  And the accents – especially McAlvoy’s Scotts burr – can be difficult, at times, to understand.

But they are both so expert, so charismatic, so tuned into each other, that you are drawn to them the way you are to an especially gruesome car wreck. You don’t always want to look, but you really can’t look away either.

It’s all here – sex, relationships, politics, parenthood, pandemic. If Hell, as Sartre said in “No Exit,” is other people, “Together” insists salvation can be found in other people, too. At least, a salvation of sorts.

Hats off to the cast, Kelly, and to director Stephen Daldry whose work includes “The Crown,” “The Hours,” “The Reader,” and the sublime “Billy Elliott.” Scalding and courageous, “Together” isn’t necessarily fun, but to echo Joaquin Phoenix’s mad Emperor in “Gladiator,“ you will be entertained.

“Together” can be viewed through video on demand.