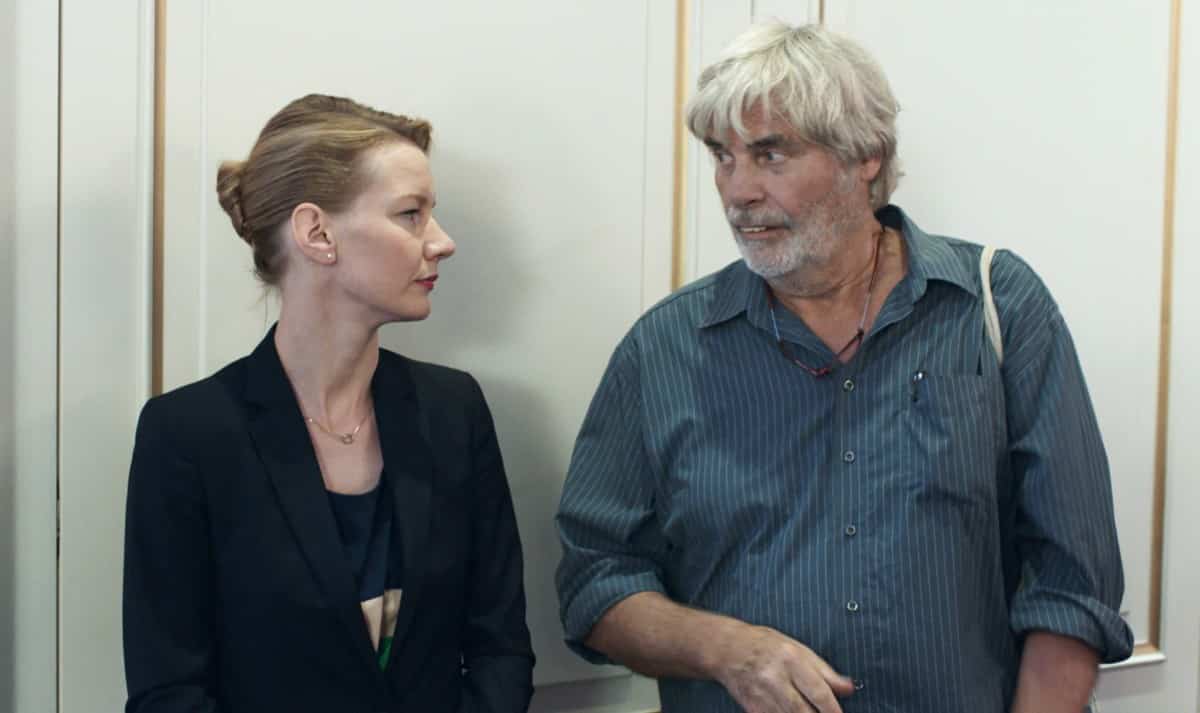 In 'Toni Erdman,' Ines (Sandra Huller) travels to Budapest on a consulting job only to be confronted by her father, Winfried (Peter Simonischek), who's intent on saving her from herself. Credit: kino.de
Share4
Tweet
Share1
Pin
Pocket
WhatsApp
Buffer
Email
Reddit
5 Shares

An absurdist dark comedy with a thoughtful subtext, Maren Ade’s German comedy is both seriously silly and, well, seriously serious. 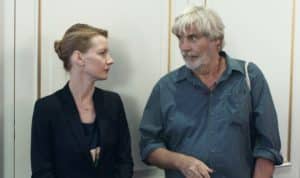 In ‘Toni Erdman,’ Ines (Sandra Huller) travels to Budapest on a consulting job only to be confronted by her father, Winfried (Peter Simonischek), who’s intent on saving her from herself. Credit: kino.de

At heart, it’s a father-daughter tale. The father, Winfried (Peter Simonischek), is a 60-ish semi-retired music teacher with an impish (childish?) penchant for playing dress-up. Not drag dress-up, but a weird creation whose fake teeth and shaggy wig suggest a cross between a Neanderthal and an aging rock star (Gene Simmons comes to mind).

Winfried’s alter ego even has a name: Toni Erdman. At least, that’s the name he offers when he turns up unexpectedly in Bucharest where his daughter, Ines (Sandra Huller), has been sent by her consulting firm to do the dirty work in a potential client’s downsizing deal.

In many ways, Ines looks the part of the archetypal heartless (yet sexy) career woman. Her mouth grimly set, her hair in a tight French twist, she favors a unisex uniform of white silk shirt and business-like black slacks.

Her self-centered “free-spirited” father, from whom she’s mostly estranged, wants to shake her up. To, in a sense, save her from her own cliché. His methods, however, can be as unsound as they are hilarious. Introducing himself, variously, as a corporate life coach or a German ambassador, he thoroughly intrudes her life.  The sad/weird thing is, her colleagues tend to treat him with more respect than they do her.

Why? Well, basically, because he’s a guy. Even if he’s an incredibly odd guy.

Ade, who also wrote the script, is working on a multitude of themes here. But two threads stand out.

On the one hand, there’s the dispiriting manner in which Ines’ gender undermines her professional life.  Unlike the guys, she hasn’t left her spouse behind so she can bring along a mistress or set out, guilt-free, to explore Bucharest nightlife. And she’s the one the company’s CEO asks to spend an afternoon shopping with his wife.

Equally important is the whole father-daughter deal. Winfried blithely “confides” that, given how little attention Ines pays him, he’s hired a surrogate daughter who will cut his toenails for him.  Great, she replies. She can also, “call you on your birthday so I don’t have to.”

The apple, as they say, doesn’t fall far from….

At 162 minutes, “Toni Erdman” is admittedly a long haul.  But the picture is such an original, you don’t really notice once you get on its peculiar wavelength. Plus, the acting is expert. Simonichek’s oddball guardian angel is the showier role, but Huller matches him scene for scene, even when she has little more to play than a career-conscious sourpuss.

Not surprisingly, an American remake is already in the works. And since it stars Jack Nicholson and Kristen Wiig, you’ll probably want to see it. But you absolutely want to see this version first.

Previous Article
In hindsight, it seems obvious
Next Article
When we drain that swamp, where do we sink the pump?