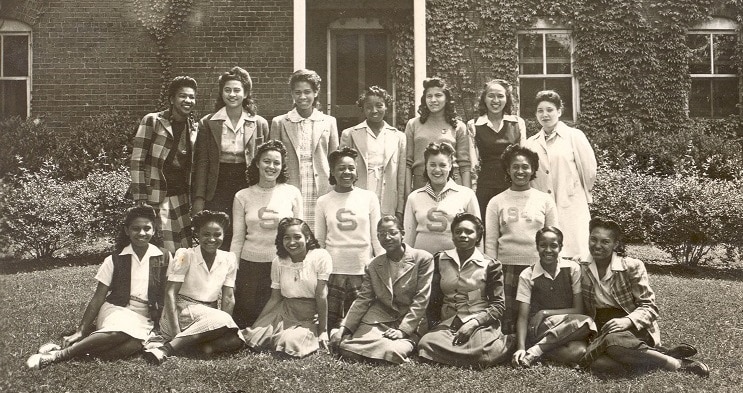 This summer we shared the story of Marian Armstrong-Perkins and the young athletes she coached to Olympic victory in the 1950s and ’60s. These women are part of a longer tradition of African American women’s participation in organized athletics in Atlanta. This week, HOLLY SMITH, of Spelman College, introduces Spelman’s rich history of athletics and wellness programs, spanning a century and beyond. 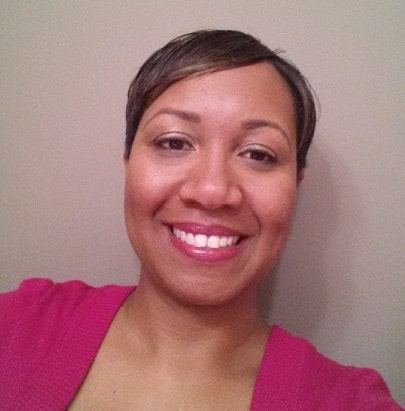 As with many archival treasures, the discovery of the photo happened serendipitously. Anika, a Spelman Archives student assistant, was sorting loose materials when she came across an image of 13 Spelmanites posing with a basketball. Each young woman was identified on the front of the image, and it was noted they were attending a sports rally in 1915. Kassandra Ware, the archives assistant, posted the image on the archives Facebook page, and we subsequently received a record number of “likes.” This popular photograph highlights an important component of Spelman’s history many might not be familiar with: almost from the college’s beginning, health, wellness, and athletics were an integral part of the curriculum and culture of Spelman’s campus.

Spelman College, founded in 1881, began with the mission of providing educational opportunities for black women. In April of that year, the first classes were held in the basement of the historic African American church, Friendship Baptist. Since those first classes in the basement of Friendship, thousands of other women have graduated from Spelman College, ranked first among historically black colleges in the 2016 U.S. News & World Report. 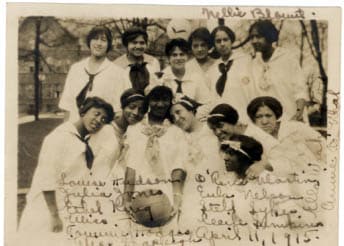 Early images from Spelman’s photographic collection demonstrate that physical fitness was encouraged and part of the routine for many students. A photo from the early 1900s depicts several young women in skirts engaged in a spirited game of basketball in front of Giles Hall. The 1925 Annual College Report in The Spelman Messenger, a campus publication, discusses the importance of athletics for physical health and overall well-being: “At present every student in the institution is required to have physical education twice a week. There is a great need for a room for the practice connected with basketball, volleyball, and other team games. Interclass and interdormitory games are one of the most normal and desirable channels through which adolescents may discharge some of the surplus energy which inevitably accompanies a regime of regularity in meals, sleep, and work.” 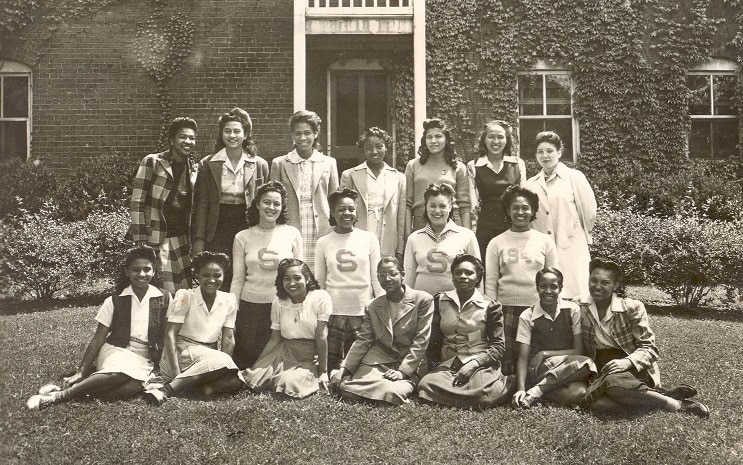 In 1938, the students established the Spelman Athletics Council, which later became the Spelman Athletics Association. Composed of student representatives from each class, the association organized teams in various sports and arranged games between the classes. The interclass tournaments in basketball and volleyball were so popular that they were held in the Morehouse College gymnasium. There were also annual tournaments in tennis and archery. The achievements of the athletic association were celebrated in the May/June 1938 edition of the student publication The Campus Mirror, noting that they reinstituted the custom of awarding letters for outstanding achievements for sports for women in each academic class. 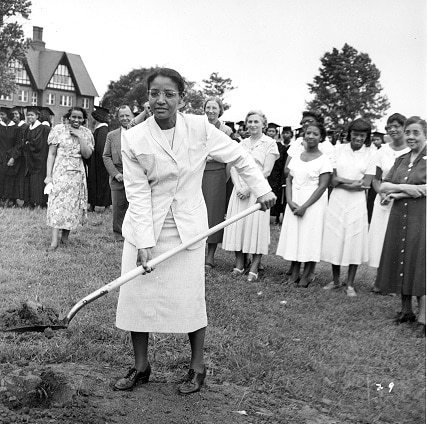 The laying of the cornerstone for Read in 1950 was a grand celebration with a number of faculty, students, staff, and community members across the Atlanta University Center in attendance. The unison readings done by each class at the event reiterated the idea that exercise and recreation was essential in developing the mental, physical, and social character of a Spelman woman.

The next several decades saw a growth of sports clubs and interest groups at the college. Swimming also grew in popularity at Spelman, and in 1961 the Swim Club was established. By the mid-1970s, an intercollegiate program in tennis, basketball, and volleyball had been organized. Spelman became a member of the Atlanta Phoenix Conference, which included teams from Spelman, Clark College, Morris Brown College, Georgia Tech, and other area institutions. Throughout the 1980s, intramural activities included open recreation opportunities and structured play. The physical education department held open recreation nights, where students, faculty, and staff participated in such activities as volleyball, basketball, badminton, table tennis, and other fitness programs. 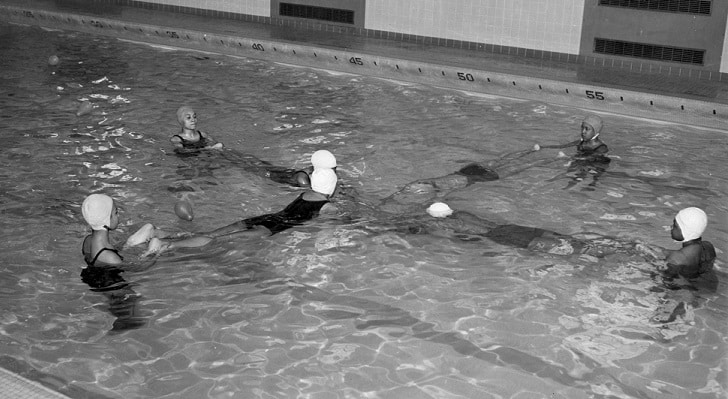 By the early 2000s, Spelman College was a member of the Division III Conference of the NCAA, as well as the Great South Conference. The Spelman Jaguars competed in track, soccer, volleyball, basketball, tennis, golf, softball, and a variety of other sports. In 2012, the administration announced the college was leaving the NCAA and eliminating the athletics program due to dwindling participation in Spelman’s conference and to conserve financial resources.

Under President Beverly Daniel Tatum’s leadership, igniting a “Wellness Revolution” became the ideology behind a total renovation of Read Hall and programs focusing on the total health and well-being of the entire student body. In 2015, the Wellness Center at Read Hall was reopened with state-of-the-art exercise equipment, a basketball court, an Olympic-sized swimming pool, and a variety of new classes, including yoga, kickboxing, and Zumba. There are also nutritional eating courses and healthy cooking demonstrations offered for faculty, students, and staff. 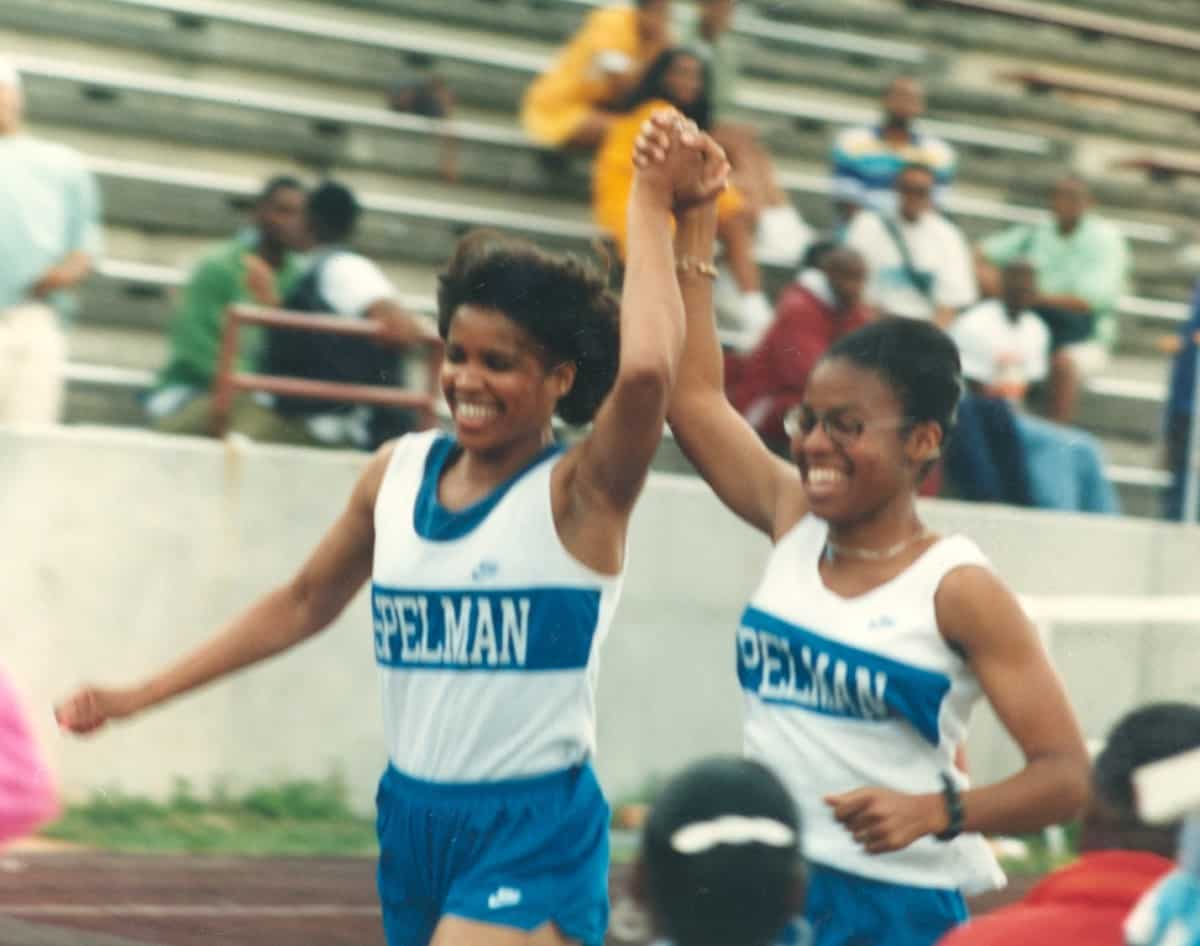 The Wellness Revolution theme echoes earlier ideas in Spelman’s history relating to the importance of healthy eating, sufficient rest, and physical activity to the overall well-being of the individual. From the 1910 basketball team to current Spelmanites enjoying a water volleyball tournament, the story of sports at Spelman is rich, with many different components. Sports and physical education at Spelman have always focused on providing an overall experience of health and wellness for black women, seeking to grow and develop these young students — mind, body, and soul.

You can experience Hometown Teams: How Sports Shape America, a traveling Smithsonian exhibition sponsored by Georgia Humanities, at the Carrollton Cultural Arts Center in Carrollton through December 24.

Holly Smith is the College Archivist at Spelman College in Atlanta. She is passionate about community archives and archival advocacy related to collections for underrepresented groups.