Trees Atlanta’s plans for its new headquarters on the Westside has received significant support from two major Atlanta foundation.

The Robert W. Woodruff Foundation and the Kendeda Fund have awarded Trees Atlanta with $3 million grants toward its $16 million capital campaign.

The nonprofit still needs to raise $2.2 million from philanthropic sources to successfully complete the campaign to build its new headquarters along the Atlanta BeltLine at 825 Warner St. in the Oakland City neighborhood adjacent to Adair Park. 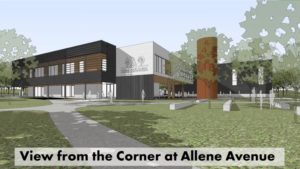 A schematic drawing of Trees Atlanta’s new headquarters from the perspective of The Atlanta Beltline (Special: Trees Atlanta)

Trees Atlanta already has purchased the 3-acre site for about $3 million from Atlanta BeltLine Inc. thanks largely to funding from the Kendeda Fund. The new 20,000 square-foot headquarters will be located on the site of “The Bakery Atlanta” – a multi-faceted arts complex that had already intended to relocate from the site, according to Greg Levine, Trees Atlanta’s co-executive director and chief program officer.

The new headquarters will be two times as large as Trees Atlanta’s existing headquarters – the Kendeda Center – in Reynoldstown, where it has been since 2008.

“We were so excited about our new headquarters because there are only a couple of trees on the property,” said Connie Veates, Trees Atlanta’s co-executive director and chief operating officer. “We will be able to regreen the entire site.”

Levine said Trees Atlanta plans to plant between 150 and 200 trees on the site, which will include its operations building with a loading dock and an area big enough to park up to 14 big trucks), a green meadow with paths that will connect to the Atlanta BeltLine, an outdoor classroom as well as its main building that will house the administration and include gathering spaces that will be available to the community. 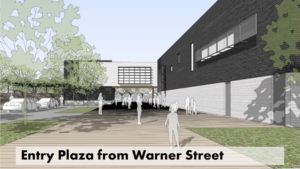 “Every square foot of the building should have more than one use,” said Levine, who added that the two buildings will be connected by a bridge so there will be a breezeway or a “dog trot” as an amenity on the property.

One visual feature that will remain on the site is the signature grain tower. Trees Atlanta is considering various options on how best to incorporate the tower as part of its headquarters. It also wants to include artistic elements on the site.

Plans currently call for about 50 parking spaces for the staff, visitors and volunteers. “It will be the most forested parking lot you’ve ever seen,” Levine said. “We will have a lot of green infrastructure, including rainwater collection.”

Trees Atlanta said it needs the new headquarters because it has outgrown its current location. The new site also will allow Trees Atlanta to consolidate its operations in one location. 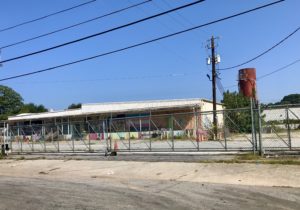 The current site of Trees Atlanta’s future headquarters, a building that has operated as an arts venue called “The Atlanta Bakery” (Photo by Maria Saporta)

“There’s been so much need across Atlanta for what we do,” Veates said. “We have had so much growth over the past nine years – since Greg and I have been co-executives. We had leased two other spaces. We want to bring everything back together in one space.”

Trees Atlanta has a three-pronged mission: planting trees, which usually occurs from October to March); conserving trees, which includes protecting existing trees and removing invasive plants as well as forest restoration; and educating both youth and adults.

“We are trying to be the voice for the trees,” said Veates, who added that Trees Atlanta is part of several collaborations that include “Tree Canopy Alliance” and the  “One Million Trees Initiative” – a 10-year effort of 10 nonprofits in 10 cities to plant on million trees.

The $16 million capital campaign includes $1 million for tree planting in metro Atlanta (the Woodruff Foundation is supporting that initiative) as well as $2 million to invest in the Atlanta BeltLine’s Tree Arboretum. 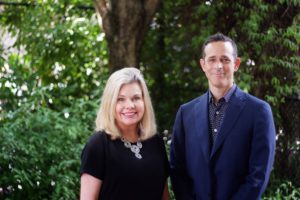 The campaign began in earnest last fall when current and former board members of Trees Atlanta raised $800,000 for the effort. Trees Atlanta also anticipates getting about $4 million by selling the current Kendeda Center and getting up to $2 million New Market Tax Credits.

The nonprofit had been looking for appropriate sites for its new headquarters for more than year, and it considered a total of five sites before settling on the location in Oakland City. It has been working on schematic plans for the site, but in meetings with the community, Trees Atlanta said it is open to input from its neighbors.

“Our landscape plan was as important as the plans for the building,” Levine said. Philadelphia-based Andropogon Associates has been brought on as the landscape architect. The Atlanta architectural firm of Lord Aeck Sargent has been selected as the architect.

Trees Atlanta intends to start demolition and construction this fall with plans to move into a completed building during the first quarter of 2022.

It is a significant moment of growth for Trees Atlanta, which was founded by Central Atlanta Progress in 1985 with Marcia Bansley as its founding executive director for 26 years. 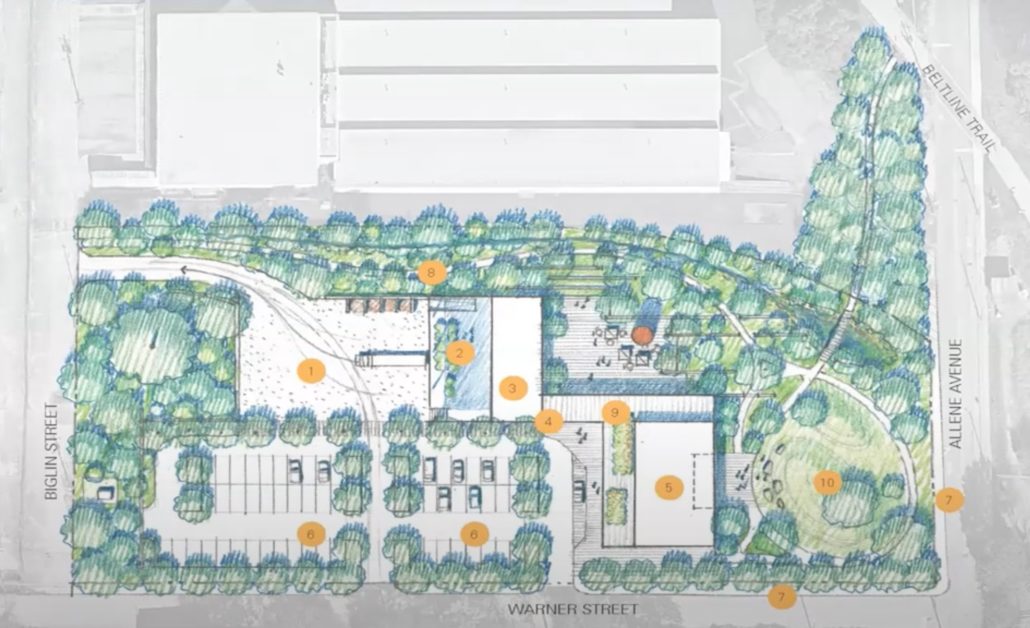 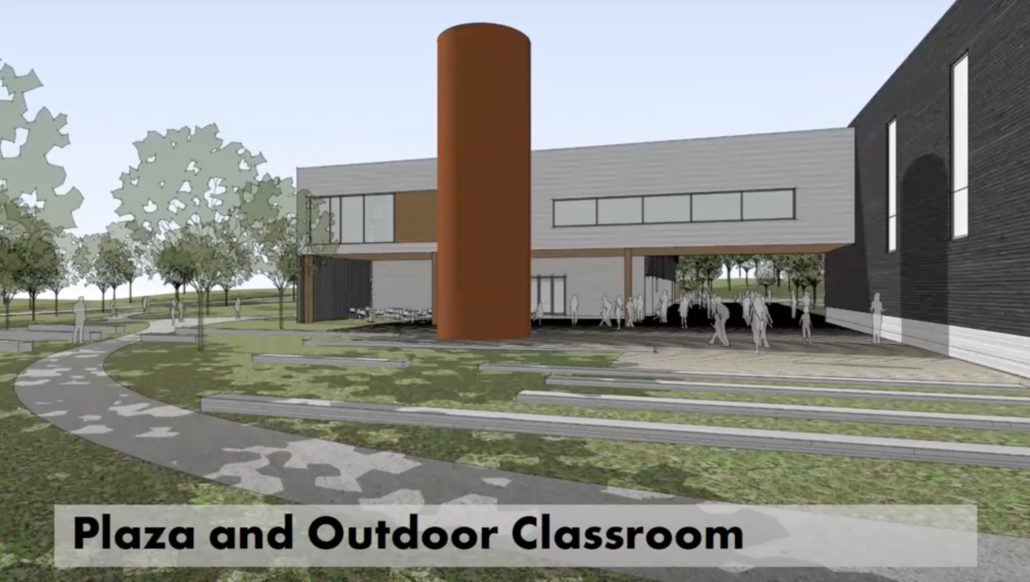 A drawing of the future headquarters for Trees Atlanta’s plaza and outdoor classroom (Special: Trees Atlanta) 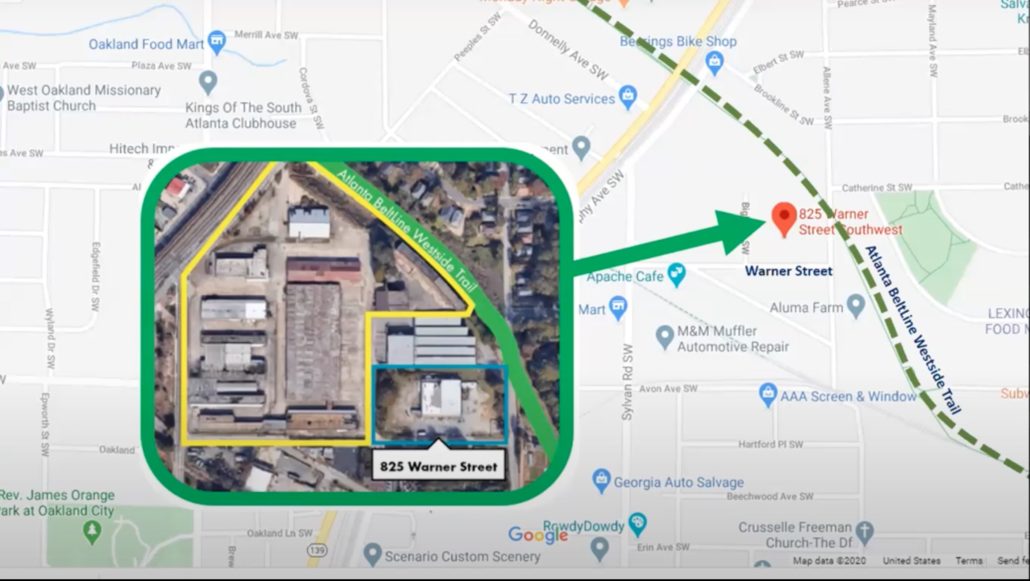 Previous Article
A new way to dine
Next Article
Mobile devices now can pay fares on Atlanta Streetcar, are tip of iceberg for region