Trump backs away from a sacred 401(k)ow 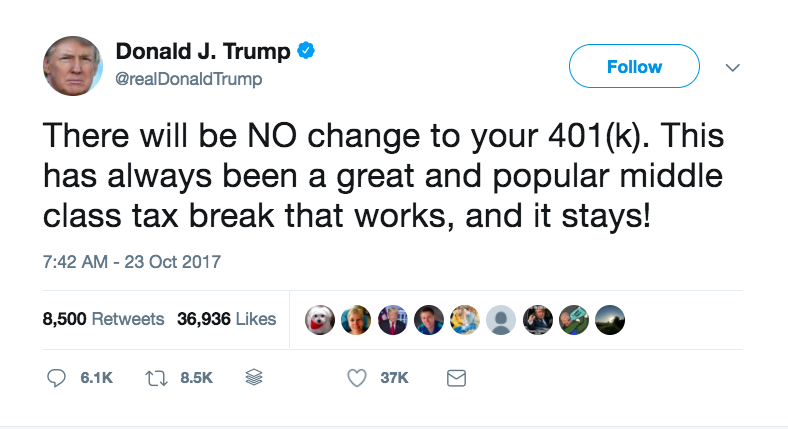 Last Friday, several major news outlets ran with a story that Congressional Republicans were considering a sharp reduction in the amount workers could contribute annually to their 401(k) savings accounts.

Just on its face this idea sounds so politically harebrained, you can understand why some people believe real news is fake. According to reports, Republicans were considering paying for part of the massive tax cut by slashing the amount workers can contribute to the tax-deferred accounts from the current level, which just went up to $18,500 a year for workers under 50, down to as little as $2,400 a year. In other words, the tax cut would be partially financed by exposing more of middle-class workers’ incomes to taxation.

The New York Times cited “lobbyists, tax consultants and Congressional Democrats” as sources for the story. Later reporting indicates this was an idea which has been floating around for some time. For whatever reason, it flickered close enough to reality for a number of interested parties to push back hard.

At 7:42 a.m. Monday, those who wanted to make sure this balloon popped got what they wanted.

“There will be NO change to your 401(k). This has always been a great and popular middle class tax break that works, and it stays!” President Donald Trump, or @realDonaldTrump, tweeted.

This brief episode followed an increasingly familiar pattern, but it’s worth dwelling on for a couple of reasons. We don’t know how seriously the proposal was being considered, but that it would even come up at this stage raises serious doubts about the entire Tax Cut formerly known as Tax Reform project.

Wall Street is heavily invested in the idea that corporate and personal income taxes are about to get whacked, but it was Wall Street and not any wave of popular outrage that burst the 401(k) balloon. An earlier proposal to make 401(k) contributions post-tax, like Roth IRAs, had a similarly short life when it was floated. As one potential revenue source after another gets removed from the table, the tax plan begins to look increasingly like a shell game.

For another thing, when you look more closely at this “great and popular middle class tax break,” some surprises emerge.

Congressional budget planners have estimated that tax exclusions for retirement plans cost the government $115 billion a year. That, however, is looking at it only from the front end, as many retirees realize when they start calculating their withdrawals. When workers cash in those plans, they pay income taxes not only on what they contributed, but the increase in the value of the stocks they probably wouldn’t have invested in otherwise, so it’s a pretty good deal for Uncle Sam.

Over the past year, 2.5 million Americans reached the age at which they have to begin cashing in their retirement accounts and pay income taxes on their withdrawals, whether they like it or not. This was the first wave of the great Baby Boom generation, hitting the fateful age of 70 1/2, which triggers the mandatory minimum distribution.

By what seems a fairly conservative estimate, the government stands to reap more than $2 trillion over the years, as more and more Boomer waves crash upon the craggy shore of the mandatory minimum.

Why has this imminent windfall for the government not received more prominent attention in the whole discussion over tax reform? And if this is a middle class tax break that works, why aren’t we talking about getting more of it, not less?

One of the complaints about the present system is that it skews the advantages to upper-income workers who can afford to put aside this much of their earnings, but squaring this inequality by making the retirement investment pool smaller directly contradicts the logic on which so much conservative economics is based. If the objective of the Republican project is to inject tax dollars into the economy, raising the maximum contribution would accomplish this, and the government would still collect the tax in the end.

What if workers could put their retirement accounts savings into a small business without paying a tax penalty for cashing out, so long as they maintained a payroll? Not something I’d approve of, necessarily. But the Heritage Foundation should eat it up.