Fulton County might get a new district attorney for the first time in 24 years, or voters might endorse the man who’s been in charge of serious prosecutions for a generation.

Incumbent Paul Howard finished second in the three-way Democratic primary last month with about 34.8% of votes. His former deputy, Fani Willis, finished first with about 42.3% of the vote.

There are no Republicans in this race — so the Democratic primary runoff between Howard and Willis will settle it. 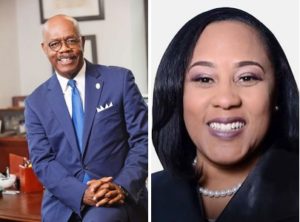 Howard is facing accusations of sexual harassment and a GBI investigation of a nonprofit he runs. Howard has denied all wrongdoing. He’s also grabbed headlines lately for bringing a felony murder charge against the Atlanta police officer who’s now facing trial in the killing of Rayshard Brooks. Though Howard also faces criticism for taking no action yet more than three years after an Atlanta police officer shot DeAundre Phillips.

Third-pace finisher and progressive Christian Wise Smith, who walked away with a very respectable 23% of the vote, has thrown his support behind Howard.

Smith said Howard has “embraced the movement of the people for a more progressive and restorative justice system,” and that Howard has committed to a range of progressive ideals like decriminalizing drug possession and hosting monthly public meetings.

But Willis has her own long list of endorsers, which includes Fulton Democrats in offices from one end of the county to the other and several progressive voices — and IBPO Local 623, the Atlanta Police union.

Willis has said Howard’s office regularly charges people who shouldn’t be charged. She has also said she’ll seek to channel more people away from jail into mental health care, drug rehabilitation and a pre-indictment diversion program.

Check out Howard and Willis in their own words in a May debate.

The Democratic primary will also decide the Fulton County sheriff.

Incumbent Ted Jackson started as interim sheriff in 2004 and has been elected three times since. This year, he got about 44% of the primary votes in a five-way race.

The second-place finisher, Pat Labat, was most recently chief of Atlanta’s Department of Corrections. But he exited to run for sheriff — probably in a timely manner, as the city has plans to close its city jail.

Jackson has said he wants to draw more attention to the mental health issues in the jail. Labat has said the biggest problem for the office is low morale and high turnover.

Read more of Jackson’s own words and Labat’s own words from Reporters Newspapers’ voters guide.

When and where to vote:

To figure out where and when to vote in person in Fulton County, the most up-to-date source will be the county’s website.  Right now, there are 17 early voting locations listed, and all open starting July 20. They’re mostly libraries but the list also includes State Farm Arena.

If you want to vote by mail, you can request a ballot applicaton via web, phone or fax. All the contact info for that is here.

Election Day is August 11. If you vote that day, you have to vote at your home poll location. You can find that at the Secretary of State’s website.