‘Undine’ – movie flows in and out of underwater fantasy and life

A scene from "Undine"

“Undine” is a movie you have to be in the mood for.  It luxuriates in its ambiguities, not really caring if we’re with it or not.

In lesser hands, that would be a disaster, but director Christian Petzold, whose “Phoenix” is one of the most brilliant films of the last decade, has a knack for coaxing us into his rarified worlds. At its core, “Undine” is one of the most haunting fish-out-of-water movies ever made. Literally. 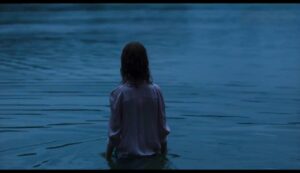 A scene from “Undine”

If, indeed, that’s what it is. Some of us may know the myth of Undine (or, more commonly Ondine).  She is a mysterious water sprite who can assume human form, especially if she falls for a human male. “The Little Mermaid” and “Splash” come to mind, but Undine/Ondine is made of sterner stuff. Should said human fall out of love with her, the results can be dire. Even deadly.

“Undine” begins with a tense confrontation between two lovers, Undine (Paula Beer) and Johannes (Jacob Matschenz). The source of the friction is soon revealed. He is dumping her for someone else. Her chilling reply: “If you leave me, I’ll have to kill you. You know that.”

Should he take this at face value? Should we? Is she truly a mythological creature or merely a woman scorned who chooses a threat over tears?

Extracting a promise that he’ll wait for her (it’s the café where they first met), she heads upstairs for her job as a government docent in Berlin, leading tours through a giant mock-up of the city.

The bulk of those complications have less to do with Johannes than with Christoph (Franz Rogowski), an undersea diver who was taken with Undine’s talk – and with her. They become lovers, which seems almost fated since he works in the same murky underwater darkness from whence she came (maybe). 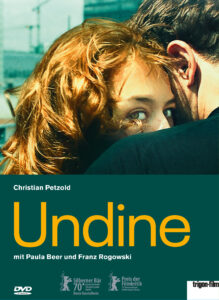 A poster of “Undine”

That’s the inherent power of “Undine,” and while it may seduce some viewers, it could just as easily alienate others. The startling intensity of Beer’s performance is both inviting and nightmarish. Much like the mortal men she encounters, we are drawn to her even as we sense a power that suggests things will not end well.

In an odd way, “Undine” is as much of a shape-shifter as its protagonist. Just when you decide the whole thing is to be taken as a fairy tale, the film becomes something more every day, more easily explicable. Except, it isn’t, not really, reminding us that, sometimes, even the mundane can have its magical side.

Note to readers, “Undine” is in movie theaters, and it’s available on demand.

Second note to readers: Eleanor reviewed “The Truffle Hunters” in advance of it opening in theaters. It is currently showing at the recently reopened Regal Tara Cinemas.

Previous Article
A How-To Guide for Summer in Midtown Atlanta
Next Article
The garden that changes lives: A conversation with Lovejoy Mayor Cartwright