United Way Worldwide and UPS are ramping up their efforts to fight human trafficking just in time for United Nation’s World Day Against Trafficking in Persons on July 30.

The partnership is fueled by a $3 million fund, raised by UPS employees who have provided charitable contributions for these efforts for the past two years as part of the organization’s giving program.

“Together, we’re working to mobilize a collaborative effort across sectors, building public and political will needed to spur greater action to end human trafficking in our generation,” said Brian Gallagher, president and CEO of United Way Worldwide, in a statement. “We’re proud to partner with UPS on this critical effort. But there is so much more to do.”

The initiative builds on UPS’s existing partnership with Truckers Against Trafficking, aimed at training all UPS drivers to spot the signs of trafficking and report them to appropriate authorities. 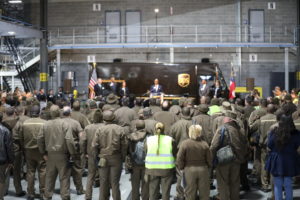 “Our goal is to make sure every UPS driver in the U.S. has the knowledge needed to spot and report on signs of trafficking,” said George Willis, president of UPS U.S. Operations. “We know that reliable tips to law enforcement are critical to making arrests and rescuing victims.”

Nicole Clifton, vice president of UPS Global Public Affairs, said the partnership with UPS began in 2016, and it has led to the training of more than 100,000 truckers to be on the lookout for signs of human trafficking.

“Our drivers deliver in every zip code in America,” Clifton said. “They are the eyes and ears. They are aware of the signs of human trafficking.”

Clifton said that UPS has “the largest anti-human trafficking training program in the transportation industry. The goal here is for all our drivers to be continuously trained.”

“We looked at cities where UPS has a fairly strong footprint and cities that have had a issue with human trafficking,” Clifton said in a phone interview. “Atlanta made sense to us for lots of reasons.”

In Atlanta, the funds will support the United Way of Greater Atlanta Survivor Home Initiative.

“We are supporting that initiative to specifically address what’s most needed in your area,” Clifton said. “It’s not a cookie-cutter model.”

The two-year pilot programs will be overseen by the United Way Center on Human Trafficking and Slavery. The end result will be community-based strategies that can be adapted across the world.

“It’s just been phenomenal to work with a world-class company like UPS,” said Mara Vanderslice Kelly, director of United Way Worldwide’s Center on Human Trafficking and Slavery, which was launched in 2015.

The new fund will invest in training, policy advocacy and community mobilization around human trafficking, in addition to the training of UPS truck drivers.

The UPS Foundation, which leads the global citizenship programs for UPS, has also allocated new funding of more than $530,000 in additional support for non-profit organizations leading the fight to combat human trafficking.