Atlanta low-balled the event, but the city on Thursday hosted an industry forum that is an early step in the process of building a major park along the Atlanta BeltLine, at the old Bellwood rock quarry. 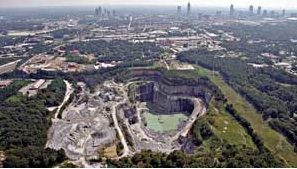 From humble beginnings in a planner’s wish list, Bellwood Quarry has come to represent the vision of the transformative powers of Atlanta’s BeltLine. File/Credit: TPL via Alex Garvin

At the forum, Atlanta presented information to vendors who may want to help establish a water reservoir at the old quarry. While the reservoir is immensely important, the public’s attention has been more attracted to the prospect of a huge new park to be built on the same site on Atlanta’s west side.

The Bellwood park could be more than three times the size of Piedmont Park, arguably Atlanta’s crowning urban jewel. Bellwood encompasses nearly 600 acres, compared to 185 acres at Piedmont Park, according to a 2004 feasibility study of the BeltLine.

Bellwood is to be developed in a manner similar to Historic Fourth Ward Park.

Bellwood is to provide for a reservoir and public space, using funds from the departments of watershed and parks. Historic Fourth Ward Park was built with funds from watershed and a parks improvement bond, and was created to manage storm water runoff and provide space for parkland and recreation.

The event on Thursday addressed just the water reservoir aspect of Bellwood.

Atlanta invited to the forum companies that may be interested in building the 2.4 billion gallon reservoir. Another piece of the project is a 5,000-foot tunnel, and pump, that is to deliver water to the reservoir from the Chattahoochee River.

The Bellwood reservoir and planned park is located west of Atlantic Station, and northwest of the Georgia Dome. Credit: Google Earth, David Pendered

Once the reservoir is finalized, the city will be better able to discuss the components of a park.

City officials have said in years long past that they park is expected to have some sort of water feature, perhaps a lake or pond that could be available for small boats and swimming. The recreational facility would be separate from the water reservoir.

The Atlanta City Council voted in October to propel the Bellwood park. The council created the Bellwood Quarry Redevelopment Review Committee. It’s supposed to deliver within six months its formal comments on the creation of park and recreational space at Bellwood.

Previous Article
Genuine Parts moving its home base to Wildwood Office Park and away from new Braves stadium in Cobb
Next Article
Column: Five Georgia nonprofits rank among nation’s top 25