On Aug. 18, 1965, The Beatles made their sole appearance in Georgia. The city was abuzz and, before the concert at Atlanta Stadium, former Mayor Ivan Allen presented the band with the keys to the city. Around 30,000 folks showed up that hot summer night 57 years ago, paying between $4.50 to $5.50 for tickets. 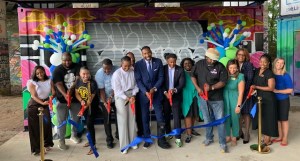 BeltLine MarketPlace — a pilot program for local small businesses — is hosting a community block party this Saturday, Aug. 20, to kick off the program.

This weekend, folks can check out the three new storefronts on the Westside Trail, at 1089 Allene Avenue, from 3 p.m. to 5 p.m. on Saturday, along with activities for kids and a breakdance performance.

As part of the program, the companies — Not As Famous Cookie Company, PinkPothos and Urban Grind — have set up shop in their own artistic, architecturally-designed shipping container created by architectural design firm Atelier 7. Three other small businesses — Cococakes by Coco, Good As Burgers and Grady Baby Company & Apparel — have opened along the Eastside Trail, underneath the Freedom Parkway Bridge.

The new initiative, supported by a $750,000 grant from the Kendeda Fund, aims to preserve and create affordable spaces for local small, minority and businesses.

Click here for more information about the BeltLine MarketPlace block party. You can also check out photos by SaportaReport‘s Kelly Jordan from last month’s ribbon cutting. 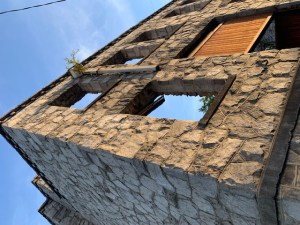 The former St. Mark AME Church in the English Avenue community has been named an official City historic landmark.

The Atlanta City Council approved the designation on Aug. 15. Landmarking gives the City review of exterior changes or demolition, and is an honor that can provide a boost to preservation efforts.

The semi-ruined church at 491 James P. Brawley Drive was built in 1920 for a white congregation and bought in 1948 by St. Mark. It has been vacant since 1976 and has been the target of restoration efforts since 1995. Today, it essentially consists of the four granite walls still standing, with its interior used as a community space.

Pastor Winston Taylor, who owns the St. Mark property, has teamed with the nonprofit Atlanta Preservation Center and community groups on preservation and reuse projects that are still seeking funding. 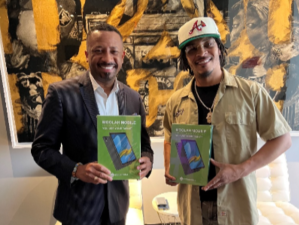 Morris Brown partners with T.I. to give students free tablets

Harris, a rapper and entrepreneur, donated over 200 free tablets to Morris Brown students before beginning their fall semester.

“I am excited to partner with Moolah Wireless to be able to provide the students at Morris Brown free tablets to support their educational endeavors,” Harris said in a statement.

The tablets come with a 12-month data service from the wireless company.

The Historically Black institution received its full accreditation from the Transnational Association of Christian Colleges and Schools in April after an almost 20-year absence. 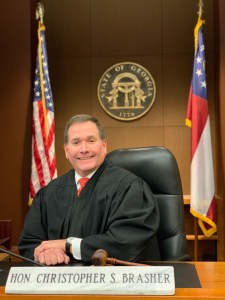 The chief judge of Fulton County Superior Court has survived an attempt to force him off a particularly contentious case for alleged bias.

The case was brought by former Fulton-DeKalb Hospital Authority (FDHA) Board of Trustees chair Dr. Sharon Harley against the authority and board, whom she alleges illegally ousted her last year. The case is being heard by Chief Judge Christopher Brasher.

Brasher was the subject of a July 29 recusal hearing by another judge after Harley’s attorneys claimed he was biased for an alleged “rage-filled rant” at a witness who was not following his directions. Judge Rachel Krause ruled on Aug. 2 that Brasher’s conduct did not amount to bias and an immediate appeal was denied.

It was the second time Harley’s attorney, Wayne Kendall, has accused Brasher of bias in the case. Kendall previously complained that Brasher improperly gave FDHA attorneys – but not him – a copy of a crucial order about disputed records in the case.

Harley alleges she was forced off the FDHA board last year in an illegal meeting amid various power and money disputes at the organization, which owns and funds Grady Memorial Hospital. The FDHA says that’s not true and that Harley was an obstructionist to new leadership and strategies.

The FDHA also has filed counterclaims alleging that Harley and other associates tried to “intimidate and harass” witnesses and that Kendall failed to provide certain documents sought through the unusual method of a Georgia Open Records Act request.

The trial began July 8 and is scheduled to resume Aug. 31. Brasher will decide the case alone without a jury. 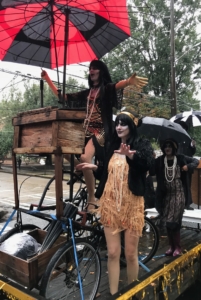 L5P’s Halloween Parade is one of many unique and beloved events in the community. (Photos by Kelly Jordan.)

Little 5 Points — one of the quirkiest pockets of the city — is known for its eclectic shops, funky artwork and unique folks. On Sunday, Aug. 21, the Little 5 Points (L5P) Alliance will host a celebration of the people and organizations who have helped shape the area into the community it is today.

“Little 5 Points has been built and nurtured by people who love the area, and we want to make sure that continues while encouraging the story to be told to increase support for and investment in small commercial business districts,” L5P Alliance Executive Director Lauren Welsh said in a press release. “Too often in Atlanta we are eager to knock down or ignore our history, yet L5P’s aggressively independent and eccentric spirit is still very much alive.”

“People Make the Place,” hosted at 7 Stages Theatre, will include stories of dedicated neighbors and organizations, along with an award ceremony highlighting the changemakers. Two awards will be presented by SaportaReport’s Kelly Jordan.

Atlanta Mayor Andre Dickens will attend the celebration, and the event will be emceed by Atlanta comedian Mark Kendall. Tickets are $50, and proceeds will support the Little 5 Points Alliance. Click here for more information and to purchase tickets.

My Chemical Romance was to be one of the main attractions for the controversially canceled Music Midtown concert festival. Now the rock band is heading 20 miles north into the ‘burbs that weekend for a show at Alpharetta’s Ameris Bank Amphitheatre.

Last week, Live Nation — which also operates the amphitheater — announced that My Chemical Romance is rescheduled to play there on Sept. 18. Subscribers to Music Midtown’s email list received a presale ticket offer to the amphitheater show. The email said the band wanted to make the offer in the wake of the festival cancellation.

Unlike Piedmont Park, the amphitheater is privately owned — by Atlanta’s Woodruff Arts Center — and thus can ban guns under state law.

Some other major acts that were booked for Music Midtown — including Fall Out Boy, Future and Jack White — have not announced new dates for that weekend.

Atlanta-based Ameris Bank recently announced its Down Payment Grant Program, committing to $10 million in grants to first-time homebuyers over the next three years.

The new grant program will aid new homebuyers needing assistance with down payment and closing costs, offering up to $12,500 in forgivable grants.

“Especially given today’s tough housing market, the objective of this program is to reduce barriers to homeownership and strengthen communities,” CEO Palmer Proctor said. “This program will provide hundreds of low-to-moderate income homebuyers in underserved communities, including minority communities, with funding and education assistance to help them achieve homeownership.”

From Aug. 20 to 21, the City of East Point, in partnership with Georgia Indigenous Diversity Consulting, is hosting the inaugural Standing Peachtree Native American Festival and Powwow at the East Point City Hall on East Point Street.

“The city of East Point celebrates and firmly believes that our diversity is our strength,” said Deana Holiday Ingraham, mayor of East Point.

Admission is free and lawn chairs are permitted. Click here for more information.

Admission is FREE and will be filled with lots of activities! pic.twitter.com/xhP8RjdGA4

The Georgia Trust for Historic Preservation has opened applications for this year’s Callahan Incentive Grant, which provides up to $10,000 in matching funds for preservation projects.

The money is available to nonprofit or governmental organizations for projects at sites that are listed, or eligible for listing, on the National Register of Historic Places. The grant is only for capital improvements and must “provide significant impact towards a full rehabilitation or restoration of the historic site.” The projects must be completed within a year of the grant award.

The organization must provide an equal match to the grant funding, which can be in cash or in equivalent volunteer work hours. Applicants also must show the project has “significant community impact” and support, and provide a long-term maintenance plan.

The application deadline is Oct. 3. For details, see the Georgia Trust website.

Over 50 Atlanta nonprofits selected for Bank of America grants

Bank of America recently announced that over $1.2 million in grants will go to 53 Atlanta-area nonprofits to help individuals and families have better economic futures, with a focus on education and workforce development.

The selected nonprofits offer services to drive economic opportunity and mobility for Georgians with varying needs and backgrounds.

​​“One mistake should not mean a lifetime without opportunity,” Georgia Justice Project Executive Director Doug Ammar wrote in a press release. “This support from Bank of America will help Georgia Justice Project expand its commitment to Georgians who have been impacted by the criminal legal system and help marginalized people get a second chance.” 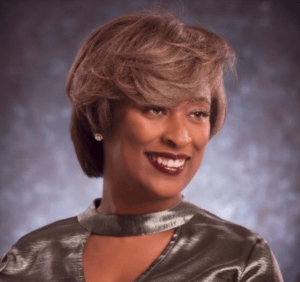 Future Foundation — an Atlanta-based organization offering academic, social-emotional, and career-planning support for students in underserved communities — has named Ronnette Smith as its next CEO.

Most recently, Smith served as founder and CEO of RRS Legacy Group, a consultancy specializing in brand management, corporate reputation, facility management and grassroots strategic planning. She has also worked for top corporations like AT&T, Walmart and Sam’s Club.

“The Board is thrilled to welcome Ms. Smith as our new Chief Executive Officer. She is the ideal candidate to lead Future Foundation into our next chapter,” Board Chair Imara Canady said. “We know that her notable experience in the corporate sector will help us strategically grow and enhance our programming model, allowing us to continue to serve even more students and families in the South Fulton area and impact Atlanta and beyond.”

Smith replaces James Tyson, who served as interim CEO for the past two years.

“I am excited at this stage of my career to be joining the Future Foundation family, focusing on youth, their families, and the community,” Smith said in a press release. “I feel energized by the opportunity to bring my collective experiences to this organization. I’m proud of the impact they’ve made in their 21 years in Atlanta and look forward to learning more about how to lead them effectively in the future.” 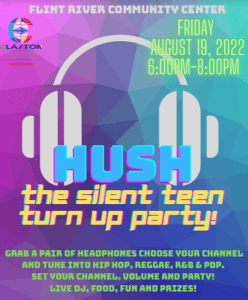 Teens can enjoy the party from 6 to 8 p.m. with headphones playing hip hop, reggae, R&B, pop and more. Food and door prizes will be provided.