On July 14, 1974, Georgia governor Jimmy Carter announced his run for the presidency. He served as the 76th governor of Georgia from 1971 to 1975, and even though no candidate from the Deep South had been elected since the Civil War, he was elected in 1976 as the first — and only — president from our southern state.

Earlier this week, SaportaReport analyzed Airbnb’s Atlanta listings and discussed research on how the short-term rental company may be reducing the long-term housing supply in other cities. New housing construction data from the City suggests a similar impact here.

A team of researchers at Canada’s McGill University is among the academics studying Airbnb’s impacts on housing affordability, both by increasing costs with the new short-term rental revenue potential and by decreasing the supply for permanent residents.

In a 2020 paper, they estimated that Airbnb listings have removed 17,000 to 34,000 housing units from the long-term rental market in Canada – a tiny percentage of the total housing, but with big impacts because they are concentrated in certain areas, especially when vacancy rates are low. The researchers noted that cities would have to build thousands of new housing units to keep up with the loss, and even then, many of the new units likely would become short-term rentals as well. They noted some 2016 data to that point from Manhattan in New York City, where there were about 7,000 frequently rented entire-home Airbnb listings and only 4,000 new housing units permitted.

A June 12 snapshot of Airbnb’s Atlanta listings by SaportaReport and Atlanta Civic Circle found about 4,300 properties on offer. About 3,700 of those were for entire homes, not spare rooms. About a third were listed by “Superhosts,” a company status for those who rent frequently and receive many good reviews, meaning their listings are more likely to be full-time commercial rentals.

By comparison, the Department of City Planning told SaportaReport this week that it issued permits for 1,755 new housing units citywide in the fiscal year between July 2021 and July 2022. Of those, 1,088 were multi-family units and 667 were single-family or duplex homes. Actual construction timelines vary widely and some likely will never be built as plans change.

A very rough interpretation is that an entire 12 months of housing development in Atlanta barely counterbalances units removed from the market for short-term rentals, but more data analysis is needed to say what’s really happening, especially on hyperlocal effects in such hot short-term rental markets as the gentrifying Westside. An overarching point of the McGill team and other academics is that Airbnb research is still in its infancy and that many big questions on city impacts remain unanswered. 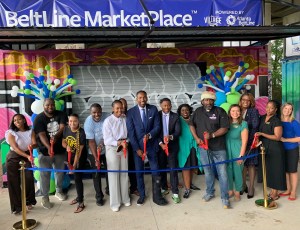 A new pilot program has hit the Atlanta BeltLine — the BeltLine MarketPlace. The Atlanta BeltLine, Inc. and The Village Market have teamed up to offer new, affordable commercial spaces along the trail, supporting minority businesses whose orders include Black men, women, veterans and members of the LGBTQ+ community.

This week, the teams announced the inaugural six local businesses that will have a new spot along the Eastside and Westside trails until November. The initiative is partially supported by a $750,000 grant from The Kendeda Fund.

The new businesses include: 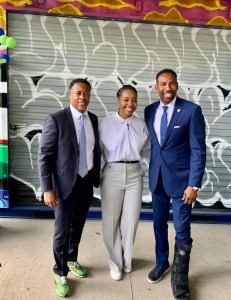 A sixth business will be announced soon. Each company will have its own artistic shipping container, developed by architectural design firm Atelier 7. The businesses can be found at 830 Willoughby Way NE under the Freedom Parkway Bridge and 1089 Allene Avenue SW on the Westside.

“This is exactly what I envisioned for a ribbon cutting,” CEO of Atlanta BeltLine Inc. Clyde Higgs said during the grand opening. “I’m emotional. This is our first business incubator, accelerator on the BeltLine. We have to be intentional that the BeltLine is a tool for the city.”

Founder and CEO of Village Market added: “I dreamed that Black businesses would be front and center, that we would create a beloved village. This is a celebration of hard work. I’m beyond moved.”

Click here for more information on the BeltLine MarketPlace. 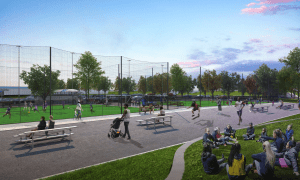 A rendering of the Kensington field. (Courtesy of MARTA.)

Soccer in the Streets expands to fifth MARTA station

A new stop has been added to Atlanta’s roster of mini soccer fields around the city — the Kensington MARTA station. On Saturday, July 16 from 10 a.m. to 1 p.m. Soccer in the Streets, MARTA and Atlanta United are hosting a grand opening to celebrate the new StationSoccer field at the transit terminal. Kick-off is at 10:30 a.m.

Soccer in the Streets is a nonprofit run by the City of Atlanta, with a vision of piecing together a network of mini soccer fields for local kids. The city kicked off a pilot program in 2016 at the Five Points Station as the first soccer field to be built inside a transit station. Since then the initiative has expanded to West End, East Point, Lindbergh and Kensington stations.

The nonprofit also hosts an adult league, and the fees go towards providing free soccer for Atlanta’s youth.

Click here to find more information about Soccer in the Streets and a schedule for the next pickup game.

Among those listed are:

If you teach a kid to fish…

From now through the end of the month, families are invited to teach their little ones how to fish at the Chattahoochee River National Recreation Area. With the help of a park ranger, kids of all ages will learn the basics of fishing and using cane poles.

The programs are offered every Monday at the Island Ford Pond and each Saturday and Sunday at Sibley Pond from 9 a.m. to 11 a.m. The team will provide supplies for the program.

“This program is a great way for families to get outdoors to enjoy a summer morning, experience fishing, and learn about the pond animals within their natural habitat,” Superintendent Ann Honious said in a press release. “Chattahoochee River National Recreation Area is a great location to experience nature in a safe and beautiful space. Fishing is a wonderful way to bring families together to enjoy one of the park’s terrific recreational opportunities.”

The programs are free to the public, but anyone over 16 years old must have a Georgia Fishing License. 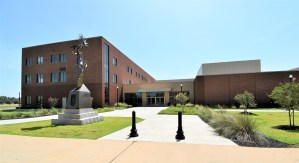 The collection, on display until Aug. 24, consists of 67 selected works from a body of art amassed over 35 years.

Paintings, drawings, prints and sculptures were collected from Kerry, a retired mailman and Betty, a former television news producer, who invested these pieces for their principal luxuries.

Artists including Romare Bearden, Beverly Buchanan, Jacob Lawrence and Gordan Parks are presented in this group from the African Diaspora. The latter — in terms of training, experience and expression — are strikingly diverse but unified in their use of cultural and historical narratives.

“In their rapture of appreciation of the courageous acts of visual artists, Kerry and Davis have created a cultural oasis in which their community can recognize, inform and celebrate themselves,” said Tina Dunkley, former Clark Atlanta University museum director.

The gallery, located inside the Dr. Joseph W. Holley Fine Arts Center, is open Monday through Thursday or by appointment from 10 a.m. to 4 p.m.

Three Georgia students who are aging out of the Georgia foster care system have recently been selected for a financial scholarship from the Cobb Community Foundation (CCF).

The Fostering Education Scholarship Fund was created last year, so these students are the first recipients of the $7,500 scholarships. The program was created to support the resilient students aging out of the state’s foster care system and who want to pursue higher education.

​​Those who would like to support their mission can click here to donate. CCF manages charitable funds for local individuals, families and organizations who want to make a difference in our community. 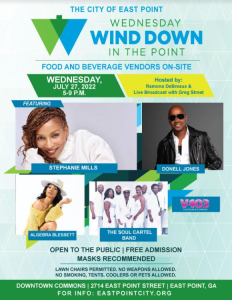 (Courtesy of the City of East Point.)

The city of East Point’s “Wednesday Wind Down in the Point” concert series resumes on July 27 with soulful R&B singer Stephanie Mills.

Admission is free with food trucks, including the East Point Farmers Market, which will be on-site and masks and social distancing are recommended. No weapons, smoking, tents, pets or outside food are allowed. 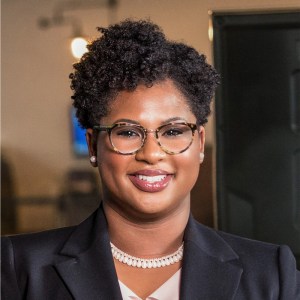 An Atlanta attorney will receive the “Up & Comers Award” from the American Bar Association’s (ABA) Section of State and Local Government Law.

Anamaria Hazard, a managing associate at the Atlanta office of the firm Dentons, is one of five nationwide winners of the Section’s Jefferson B. Fordham Awards and the only “Up & Comers” recipient.

Hazard, who worked in the City’s Department of Law from 2015 to 2019, practices municipal and real estate law with a focus on affordable housing. She also provides pro bono representation to low-income tenants and homeowners through the Atlanta Volunteer Lawyer Foundation and Neighbor in Need, and participates in programs helping low-income seniors draft wills and estate documents, according to a press release.

The Up & Comers Award is one of the section’s annual Jefferson B. Fordham Awards. It is presented to an attorney up to age 36 who “through their efforts and accomplishments show[s] great promise to continue these contributions for future achievements,” according to the press release.

Other honorees are from around the country. Lifetime Achievement Awards will go to James C. Hanks of Iowa, author of a book on school bullying, and Edward Thomas, a California expert in natural hazard mitigation. The Advocacy Award recipient is Thomas W. Mitchell, a Boston College Law School professor who helps disadvantaged people and communities secure property rights. The law department of Evanston, Illinois will receive the Law Office Accomplishment Award.

The awards are scheduled to be presented at the ABA’s annual meeting on Aug. 5 in Chicago.