A week in the news.

This month, Georgians have one more chance to weigh in on the Democratic and Republican candidates in upcoming state races. Folks looking to submit their ballot should be aware of these key dates:

Click here to check out Atlanta Civic Circle’s guide on key voting dates and the candidates going to runoffs.

On to other local news from the week: 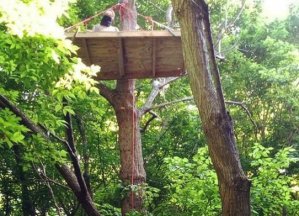 Some tree-sitting protesters have returned to the site of Atlanta’s controversial public safety training center in the wake of a May 17 police raid.

Trespassing protesters have occupied portions of the site on Key Road in DeKalb County for months, attempting to block tree-cutting and construction equipment as part of a “Defend the Atlanta Forest” campaign.

By June 6, protesters were in two new “tree sits,” or elevated platforms, on the site, according to a Defend the Atlanta Forest press release.

“We are here today to stop the development of a police militarization facility, where police would train in tactics of repression and violence against the civilians of Atlanta,” a protester called Wish said in the press release. “We are here to stop a beautiful forest from being destroyed, to stop countless animals and plants from being exterminated from this place. Climate change and police violence are two of the most pressing issues affecting our society today, and they will only worsen if this facility is built. We cannot stand by as we sacrifice humanity’s future for a Cop City.”

Preliminary site preparation is underway for the 85-acre, $90 million facility at the former Atlanta Prison Farm. The facility is intended to train police officers and firefighters as a permanent replacement for aging academies, and outside agencies are likely to rent the site as well.

The plan has been controversial due to secrecy and lack of public input. Concern and frustration have led a DeKalb County Commissioner to release the supposedly confidential land disturbance permit application and, reportedly, a City Council resolution of “non-support” for the plan, though that has yet to emerge.

District 12 City Councilmember Antonio Lewis, one of a few recently elected councilmembers who opposed the plan on the campaign trail, declined direct comment about the resolution.

“I don’t have a comment currently on this situation,” Lewis said in an email. “I am in full support of this no longer being a debtors jail and finding ways to come [to] a real solution.” 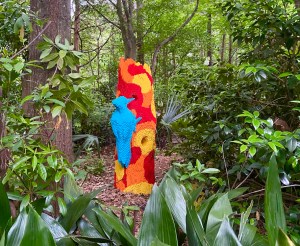 Where art and the natural world meets, Zoo Atlanta’s Art Gone Wild is born. This June, the Zoo will host a month-long celebration of the interconnectedness of nature and the built world.

During the Paint-Out Week — running from Monday, June 6 through Friday, June 10 — 20 artists will set up shop throughout the Zoo to create pieces in real-time based on their animals of choice.

On June 18 and 19, visitors can check out the outdoor market featuring locally-made jewelry, housewares, clothes and toiletries.

Over the same weekend, folks can sign up for sip-and-paint art classes offered in partnership with Sips n Strokes. Tickets should be purchased ahead of time and include a full art kit to complete an animal-themed painting.

All visitors can also enjoy Sean Kenney’s Nature POP!, an immersive art installation using 800,000 LEGO bricks to depict wild animals and nature scenes. The exhibition highlights the intersection of nature, art and humankind. Those inspired by Kenney’s work can submit an entry in the Build Your Best challenge from now until July 15 for the chance to win a one-year family membership to the Zoo.

A coalition of housing and human rights groups is holding a June 14 “Anti-Gentrification Rally” at City Hall to call for more funding in the next City budget.

The groups seek more money for the City’s affordable housing trust fund, which Mayor Andre Dickens last month proposed not funding before reversing course in the face of controversy. The money would be spent on “affordable housing preservation, rent relief and legal representation for renters,” according to a press release.

“Our City’s budget is a moral document and should reflect the priorities and needs of the people,” said the groups in the release.

The rally is scheduled for 11 a.m. at 55 Trinity Ave. The groups also are urging the public to contact their City Council members.

District 12 Councilmember Byron Amos this week introduced a resolution on creating a “Tenant’s Bill of Rights” and such ideas as rent control, which he said includes some ideas from the Housing Justice League.

On June 25 the Lowery Institute, in collaboration with the City of Atlanta Mayor’s Office of Equity, Diversity and Inclusion and the AIDS Health Foundation will present the “Be the Healing” symposium featuring author and psychologist, Dr. Joy DeGuy.

The symposium, held at the Bishop C. Henderson Student Center at Clark Atlanta University, will address topics including systemic racism, the trauma that lives within African Americans and the healing process. The event is designed to enable participants to develop a critical awareness of issues impacting the Black community.

For more information, visit the Eventbrite page to register for this free event. 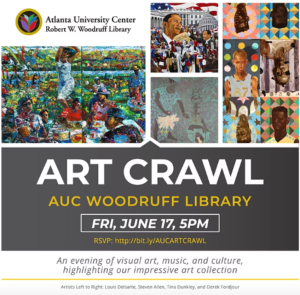 The Atlanta University Center’s Woodruff Library will host its first art crawl on Friday, June 17 to showcase its collection of pieces from artists outstanding in their fields.

The library, which serves as the premier information center of learning, teaching and scholarship for the institutions of the center, will display its expansive collection of materials from Hale Woodruff, Fahamu Pecou, Oscar Harris and many others.

Registration is free, and limited parking is available. Masks must be worn when not eating or drinking.

Find out more on Eventbrite. 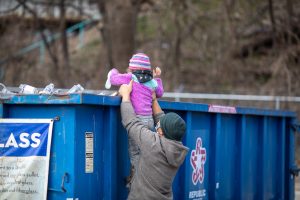 In 2021, CHaRm recycled or repurposed 2,185 tons of material. (Photo courtesy of Live Thrive.)

Live Thrive, a local environmental nonprofit that runs the Center for Hard to Recycle Materials (CHaRM), was recently selected for a $500,000 grant from State Farm’s Century of Good program.

In 2021 alone, CHaRM saw around 62,680 visitors and recycled and repurposed 4.8 million pounds of material.

Live Thrive is one of six organizations selected for a Century of Good grant, with investments going to each of the company’s four main locations, including Atlanta, Dallas, Tempe, Ariz., and Bloomington-Normal, Ill.

“This additional funding will allow us to continue our mission of public environmental education, which is a crucial element in increasing awareness about the importance of proper materials management, ultimately affecting climate change,” Founder and Executive Director Peggy Ratcliffe wrote in a press release. “Additionally, this grant will enable the expansion of our Zero Waste Centers and the services that Live Thrive currently provides to the community.”

Click here to learn more about CHaRM, the recycling facility that accepts almost everything.

The Atlanta History Center will hold a Juneteenth celebration on June 19 at its Buckhead campus.

The center has marked the celebration of the end of slavery since 2013. “Juneteenth 2022: Jubilee on the Lawn” will be the first in-person edition in two years due to the COVID-19 pandemic.

Running 9 a.m. to 5 p.m., the celebration will include a series of events that “explore the history of Juneteenth and Black innovation, life and excellence since emancipation in Atlanta,” according to a press release. A party on the Swan House Lawn with music, food and beverages will start at noon.

The celebration is part of a nationwide program among a coalition of history museums about American democracy, leading up to the country’s 250th birthday in 2026. A specific focus is what the center calls “Civic Season,” the period between Juneteenth and Independence Day.

The Juneteenth celebration at the 130 West Paces Ferry Road center is free, but registration is suggested. For details, see the center’s website.

This month, Everybody Wins! Atlanta commemorates 25 years of promoting literacy and lifelong learning for youth in the city. Since its inception in 1997, the team has read over two million pages to local children, with 50,000 hours of literacy education.

According to the nonprofit, 56 percent of third-graders in metro Atlanta are reading below grade level. To combat this learning gap, the organization distributes books to low-income families and schools throughout the metro area through initiatives like the Home Library Project and Classroom Library Project.

Over two decades, Everybody Wins! Atlanta has donated over 100,000 books to students.

“We are excited to celebrate 25 years of history impacting children at all levels and backgrounds, but there’s more work to be done,” Executive Director Tiffany Tolbert said in a press release. “Our mission is to improve children’s literacy by developing reading skills through shared reading experiences. It’s our obligation as a community to encourage students to read and enhance their self-confidence and overall success.” 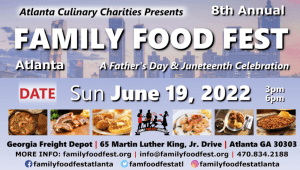 On Sunday, June 19. Atlanta Culinary Charities hosts its annual fundraiser and food tasting celebrating fathers and men who impact their families and community.

“The Family Food Fest: A Father’s Day and Juneteenth Celebration” will assist the nonprofit with its mission to provide its after-school program that teaches at-risk boys culinary and life skills.

Chefs, caterers, restauranteurs and everyday dads will by displaying their cooking skills with a variety of dishes including vegan and vegetarian selections.

The Frank Ski Show host, Frank Ski, is this year’s honorary chairman and his Frank Ski Kids Foundation has been selected as a community partner.

Fintech South, the region’s largest conference dedicated to financial innovation, will be returning in person to the Georgia World Congress Center on June 14 and 15. This year’s event will focus on “revolution, responsibility and opportunity.”

With nine 90-minute deep-dive tracks, the event will congregate 1,500 senior leaders across the fintech industry including stakeholders from the payments, wealth management, insurance, retail, government, venture capital, and retail sectors.

“We’re thrilled to be back in person after going virtual for the past two years. This event brings together some of the most renowned thought leaders from across the country to discuss the industry’s trends today,” Rodrigo Dantas e Silva, committee chair at Fintech South, said in a press release. 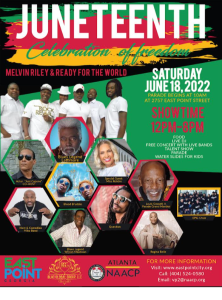 The Atlanta NAACP in partnership with the City of East Point will host its third annual Juneteenth celebration parade on Saturday, June 18.

Starting at 10 a.m. the parade will go down East Point Street to the East Point Commons on Washington Road.

Immediately following the parade, a concert featuring the William H. Bryant Band, Regina Belle, Melvin Riley, Ready for the World and Lattimore will be performing on the main stage hosted by comedian Mike Bend and DJ Just Capone. 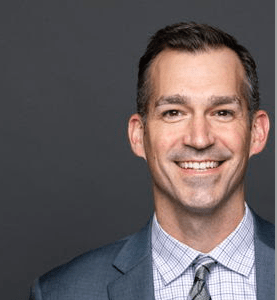 The Children’s Museum of Atlanta will welcome a new executive director to the team, Edwin Link, effective July 1. 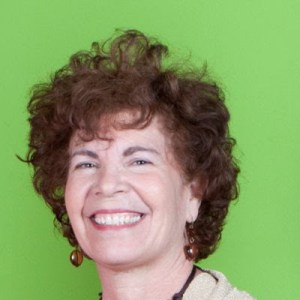 Link will proceed current Executive Director Jane Turner, who will retire after serving nearly two decades with the museum. Under her leadership, the museum served over three million children and families and executed a full renovation.

“The work of raising children rests on the shoulders of individual parents, but it also resides with the community at large,” Turner said in a press release. “I started working at the Children’s Museum of Atlanta with an intuitive sense of the importance of play and the power of the arts, which I believe all people share. We all remember the joy of playing as children, and we understand that it is the way that children learn about and navigate their world, their circumstances, and create a path towards their future.”