Some elected officials fed up with the secrecy of Atlanta’s public safety training center planning have released its supposedly confidential site preparation permit application and are reportedly working on a City Council resolution opposing the project.

The moves come as the Atlanta Police Foundation (APF), the private nonprofit leading the planning, has cited security reasons for withholding information about current and future construction — even public-record permit applications — from its own City Council-created review committee. That Community Stakeholder Advisory Committee (CSAC) has passively accepted the secrecy declaration while spending much of its latest meeting on a legally dubious attempt to remove one of its own members for criticizing its work.

District 6 DeKalb County Commissioner Ted Terry, who appointed that member, has expressed frustration with the lack of information from the APF and CSAC on a final site plan and a land disturbance permit (LDP) application filed in February and still underway. On June 2, he obtained the full, 200-page application from DeKalb’s planning department — which requests a start of early prep work as soon as this week — and provided it to SaportaReport and local environmental groups that also have been seeking information. Click here to download the document.

One of those groups, the South River Watershed Alliance (SRWA), said it understands some Atlanta City Council members are working on a “resolution of nonsupport” for the project that could be introduced as soon as June 6. Since the council approved the controversial training center last fall, at least three new councilmembers have been elected who said they oppose the project, including Liliana Bakhtiari, Jason Dozier and Antonio Lewis. None of those councilmembers immediately responded to comment requests.

The $90 million facility, which would train police officers and firefighters from Atlanta and outside departments, is planned for 85 acres of the former Atlanta Prison Farm, a piece of property that is owned by the City of Atlanta but sits outside city limits on Key Road in unincorporated DeKalb County. The Atlanta Police Department has used part of the property for decades for a shooting range and explosives disposal. But its selection for the massive training center in a secret City and APF process revealed last year surprised neighbors and DeKalb officials, generating huge controversy. The project also has been targeted by a police reform and environmental protest movement called “Defend the Atlanta Forest,” which has drawn law enforcement raids and an FBI investigation.

The CSAC was created last year as a belated public review of the plan. By council legislation, the CSAC doesn’t get a veto on the project, but rather advises APF, especially on mitigations of local impacts like noise and traffic. The APF is supposed to provide CSAC reports to the City Council. DeKalb officials view the CSAC as a crucial mechanism because, despite the property being in their county, there is no public review beyond permitting as governments are exempt from zoning. DeKalb planning officials have sometimes learned about work on the site only through residents’ complaints. 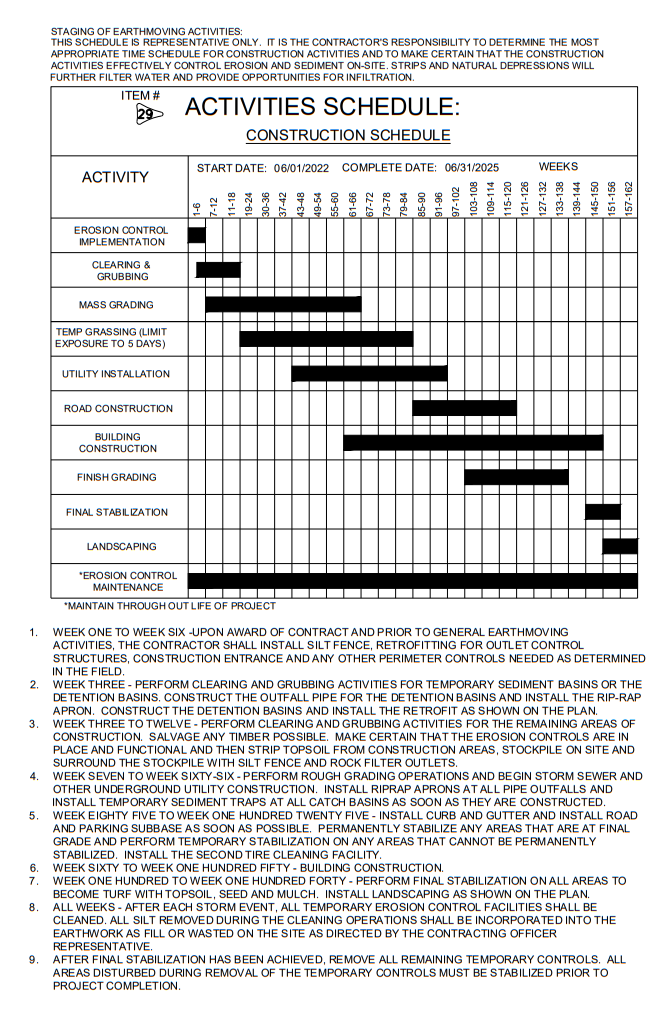 A tentative construction schedule for the public safety training center as shown in the land disturbance permit application.

The CSAC has regularly overlooked elements of the project, with the major steps of the finalization of a site plan and the filing of the LDP either being mentioned only in passing by APF officials or not discussed at all after the APF’s secrecy declaration. The CSAC also has had many transparency issues, from an unpublicized debut meeting to a lack of available minutes or recordings. APF officials told the CSAC on May 31 that it would reveal the LDP information to it and the public only after it was approved, which is estimated to be in the third quarter of the year.

For Terry, this amounts to an abdication of the CSAC’s responsibility as he understood it. “I absolutely object to any major land disturbance moving forward before the stakeholder committee gives the sign-off,” he wrote in a May 27 email to DeKalb Planning and Sustainability Department officials in a thread where he and District 5 Commissioner Mereda Davis Johnson sought LDP information.

Franck Vignon Houenou, DeKalb’s land development manager, responded on June 2 by providing the application. He said it had completed only its first round of review following the submission of drawings on April 18. “The LDP has not been approved yet,” he said, explaining that the APF has to make “corrections required by the County” and resubmit the application.

Houenou also said he had not heard from the CSAC. “I am not aware of any conditions being provided by the committee,” he said, adding he did hear “concerns” from community members by email and phone.

Among those concerned are the SRWA and another longstanding local environmental group, the South River Forest Coalition (SRFC). They are working on the City’s South River Forest concept, a vision of interconnecting 3,500 acres of existing and new green spaces in DeKalb and Southeast Atlanta, with the former Prison Farm in the middle — yet another source of controversy for the training center plan. Both groups originally were supposed to be represented on the CSAC but were removed in council legislation at the last minute for disputed reasons. The legislation still requires the CSAC to consult environmental groups, which it apparently has not done.

SRWA Executive Director Margaret Spalding said her group has been trying to obtain the LDP application with an open records request without success. After receiving it from Terry, she said, the SRWA has many concerns revolving around details of erosion, pollution control and stormwater. The group is requesting that information from DeKalb, she said.

Spalding said the SRWA is asking locals to participate in the recent kickoff of public input for the South River Forest project. “Their process really should be completed before any of this goes any further,” she said.

The LDP application includes a tentative construction schedule that anticipated clearing work beginning as soon as this week, with full construction continuing into mid-2025. (It actually says “June 31, 2025,” an impossible date as June only has 30 days.) Within that, building construction is scheduled for weeks 60 through 150. APF has said the construction would be in two phases and APF Chief Operating Officer Marshall Freeman told the CSAC that the plan is to have phase one opened by fall 2023.

The application includes a City arborist report that estimated about 4,201 trees on the site and said tree-saving and replacement requirements are met. However, part of that calculation is based on 296 acres for unclear reasons, as the APF’s part of the site is only 85 acres.

A site plan says the project would actually “disturb” 77.47 acres of the 85-acre facility footprint, which consists of three separate parcels APF is seeking to have combined into one.

Among the mysteries undiscussed in CSAC meetings was a frequently changing list of structures within the facility. Those mentioned in the LDP application include: