Georgia elected Republicans on Nov. 8, from governor to attorney general and other state offices in Atlanta. One race, though, will go to a Dec. 6 runoff — incumbent Democrat Raphael Warnock and Republican Herschel Walker will compete for a seat in the U.S. Senate. For a look at how each Georgia county voted, click here for SaportaReport’s map. 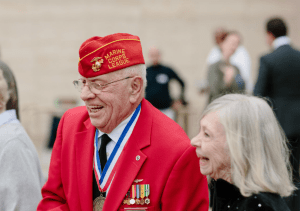 The upcoming ceremony is free and open to the public, and attendees will receive complimentary entry to the Atlanta History Center for the day.

This fall, MARTA completed its Edgewood/Candler Park transit-oriented development (TOD) on the Blue/Green Line in DeKalb County and was locally recognized for the project.

The final phase of development features a redesigned loop to better accommodate the buses, a new parking deck for residents and MARTA riders and two art pieces. The public artwork is commissioned by MARTA’s Artbound and includes “The Great Migration” by Deedee Morrison and “The Unseen” by Christina Kwan.

To see snapshots of the development’s recent grand opening celebration, scroll through the photo gallery below. Photos by Kelly Jordan. 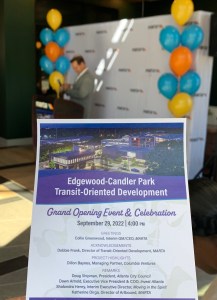 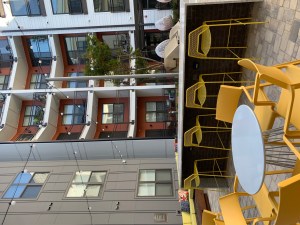 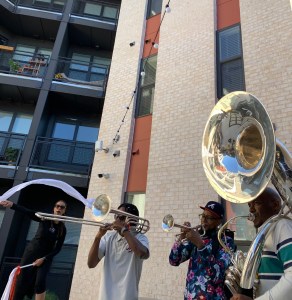 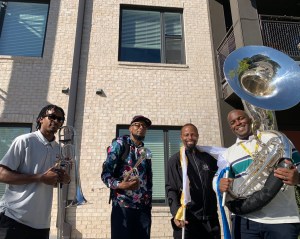 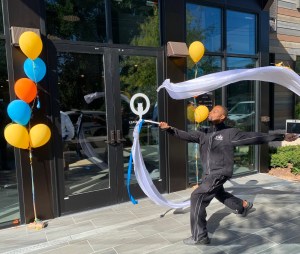 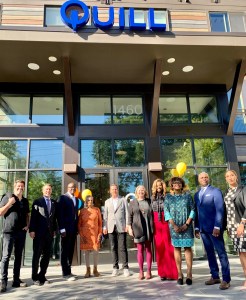 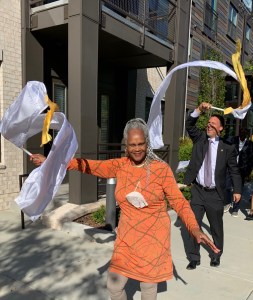 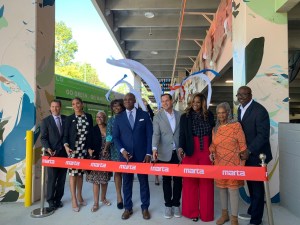 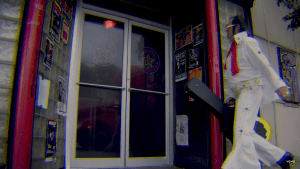 An Elvis impersonator (Eric Lee) enters the Star Community Bar in the video for Tuk Smith and the Restless Hearts’ “Everybody Loves You When You’re Dead.”

While the fate of Star Community Bar remains a mystery amid a controversial redevelopment plan, the Little Five Points institution has starred in two new music videos.

Current landlord Point Center Partners and developer Third & Urban teamed on a plan revealed in September to demolish the 437 Moreland Ave. bar for a new commercial building and apartments at an adjacent school housed in a historic church. The bar was offered space in the new building, but the plan stirred outrage and doubts about surviving such a change.

Since then, the plan paused and the developers have not responded to questions about the status. The Candler Park Neighborhood Organization (CPNO) says it has heard no updates, according to president Emily Taff, nor has a group of residents and Star Bar fans who have led opposition, according to an October email update that urged locals to join CPNO. The bar’s lease runs to August 2023 and negotiations on extending that at least to Oct. 31 have yet to conclude, according to co-owner Luke Lewis.

Meanwhile, the bar continues its status as a legendary music venue as the setting for the videos from Nashville-based band Tuk Smith and the Restless Hearts. Smith formerly fronted Biters, an Atlanta rock band that drew international notice a decade ago and also filmed several videos at the bar.

The Restless Hearts’ video “Everybody Loves You When You’re Dead” stars longtime bartender Eric Lee as a washed-up Elvis impersonator roaming L5P and playing at the bar. Another video, “Girls on the East Side of Town,” was partly shot in East Atlanta Village and inside the Star Bar’s Little Vinyl Lounge basement bar. Both songs appear on the band’s debut album, “Ballad of a Misspent Youth.”

“Great time,” Lewis said of filming the Elvis-themed video. “We are always happy to help the local scene succeed.” 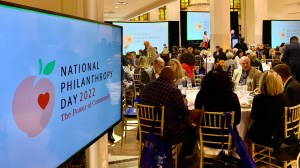 “What a triumvirate,” remarked Atlanta business leader Doug Hertz during his remarks. “Mary Ellen, Shan and Ann, you had such a powerful mark on our city, on our community and on me personally.”

Imlay, who received the Philanthropist of the Year honor, remembered her late husband, John Imlay, and how they established a foundation that continues to grow seven years after his passing. Foundation leaders have now done more than 1,000 site visits to nonprofits.

“It makes all the difference,” Imlay said of the visits. She then added that the word “nonprofit” is inadequate in describing their work. “I think the right word is heart.”

Cooper received the Volunteer Fundraiser of the Year honor for her work with the Beloved Benefit, Atlanta Committee for Progress and multiple other organizations.

“Thank you all for allowing me to live my ministry,” she said, adding that her belief is that if you change one person’s life, then that person changes someone else’s “and soon there’s a movement.”

“Don’t give up the work. I know you’re tired,” Cooper said. “Keep going. We’ve got work to do, and I’m right there with you.” 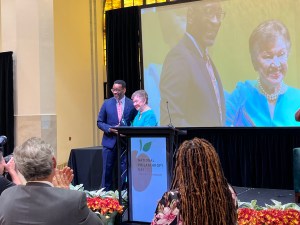 Then Ann Curry, a veteran fundraiser who recently has somewhat retired from Coxe, Curry & Associates, received the 2022 Lifetime Achievement Award, the first time it’s been given in 25 years. Milton Little, CEO of the United Way of Metro Atlanta, introduced her as one of Atlanta’s sages.

From her work with libraries, the Woodruff Arts Center, Grady Hospital and the Piedmont Park Conservancy among countless other organizations, Curry said she will continue to be involved in the community.

“I will not stop volunteering,” she said. “And I will never stop caring.”

Then she described her current interests — affordable housing, neighborhood development, parks and greenspace, the library system, new immigrants and their children — adding that we need to work on those issues as one city. Curry ended by saying: “Most of all, I salute Atlanta, the city I love.” 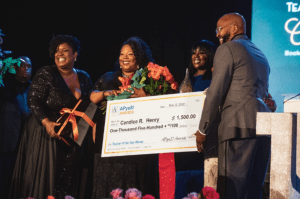 From the Booker T. Washington High School, our deserving district-wide Teacher of the Year is Candace R. Henry, a veteran science educator, who leads with vibrance and with compassion. (Credit: APS.)

Over the weekend, the Atlanta Public School District honored teachers and principals doing outstanding work in their classrooms and schools during the APyeS! Awards Gala.

“Our award winners embody the best of us,” Herring said. “They are our shining examples of commitment, passion and servant leadership, joining forces to positively impact student achievement and sustain our momentum in this milestone 150th anniversary year.”

Shaky Knees, one of Atlanta’s staple music festivals, just released its dates for summer of 2023. From May 5 to 7, Shaky Knees will be back in downtown’s Central Park for the festival’s 10th year.

No further information has been released at this point. Check their website or social media pages to stay up-to-date.

From now until Dec. 31, the City of East Point is partnering with Conley Hills Elementary School and Funds2Orgs to donate shoes for children in Haiti as well as funding for the Fulton County School.

The drive will collect gently worn, used and new shoes to donate to those in need on the Caribbean island. If the school reaches its goal of 2,500 shoes, Conley Hills will receive $1,000.

“If you have shoes, bring your shoes to us,” said Lance Robertson, Ward A Councilman for the city of East Point. “It’s time to recycle your shoes and pass them on to Haiti, Africa and other less fortunate countries. East Point, let’s do this!”

Drop-off centers to donate shoes are at the East Point City Hall and Fire Station #2 on Norman Berry Drive, #3 on North Commerce Drive and #4 on Ben Hill Road.

Downtown Festival and Tour of Lofts returns after pandemic hiatus

After a multi-year break due to the pandemic, the Downtown Festival and Tour of Lofts returns to downtown Atlanta on Nov. 12 and 13. Hosted by The Atlanta Downtown Neighborhood Association, the festival will be held at Underground Atlanta and is free and open to the public. The Downtown Tour of Lofts — offering a look at local apartments, condos and lofts — is a ticketed event on Saturday and Sunday.

The Downtown Festival was established in 2002 in downtown’s Fairlie-Poplar neighborhood and has since been held at Woodruff Park, Marietta and Broad streets and W. Peachtree’s Porter Place. The festival will include live music from local artists, a kid’s zone and classic festival food and drinks.

For more information about the downtown Atlanta festival and tour of residences, click here.

Previous Article
How does DeSantis-Kemp sound? Lousy, if you ask Trump
Next Article
Novel Center for Urban Research launched by Georgia Tech and Atlanta