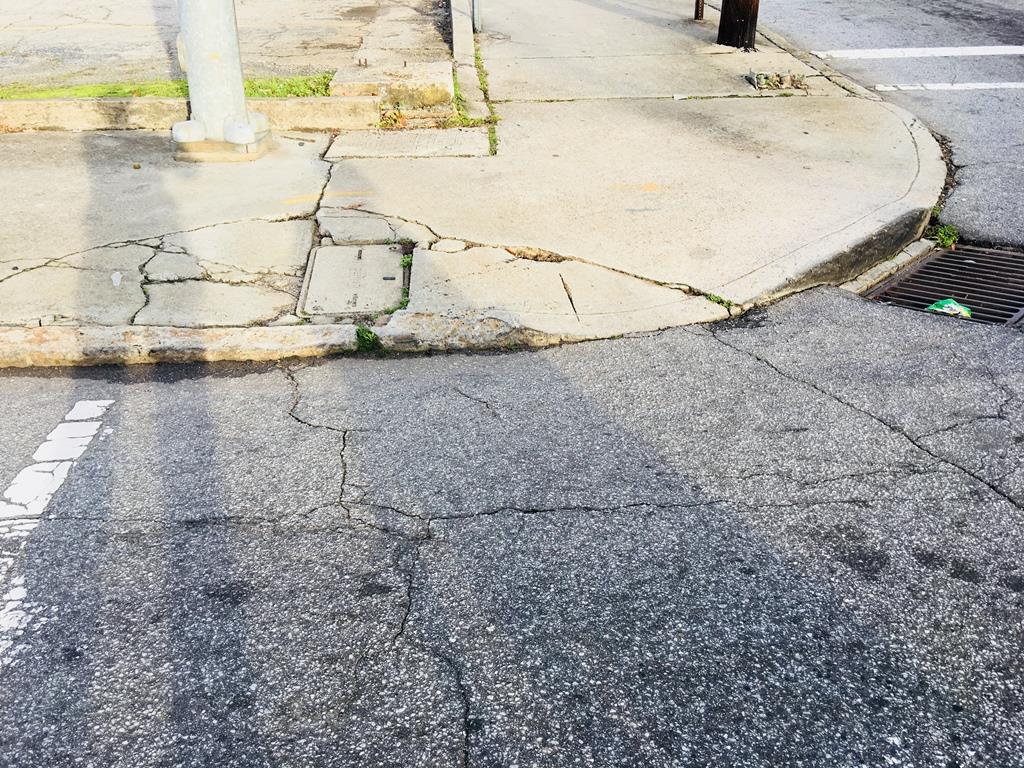 Update: This story has been updated with the second-to-last paragraph, to reflect Renew Atlanta’s spending on ADA ramp and sidewalk works.

Three people who use wheelchairs are taking Atlanta to federal court, claiming that sorry sidewalks deny they and others equal access to the city. 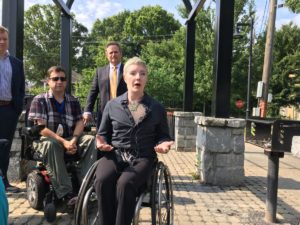 Laurel Lawson said that broken and impassible city sidewalks have forced her to travel in the street. Credit: Maggie Lee

“We’re just helping the city do what is hard but right,” said Laurel Lawson, one of the three named plaintiffs in the federal case. She spoke during a Monday morning press conference at Vine City Park. It was held on a paved barbecue and picnic plaza, but not 100 yards away along the street, the new sidewalk dead-ends into grass.

Atlantans out on sidewalks regularly encounter cracks, holes, signs or construction barrels standing on the sidewalk, low spots filled with sand or dirt, utility poles, steep curb cuts, intersections with no curb cuts at all, buckled pavers, and puddles deep enough to short out a battery. Any of those things can mean getting stuck or doubling back in search of a passable route. Or even a dangerous turn on the road.

“I personally have had to roll in the streets in traffic on more occasions than I can possibly count,” Lawson said.

A city spokesperon said via email that Atlanta is committed to making its facilities, streets and sidewalks fully accessible and available for use by all citizens and visitors.

But attorney James Radford, representing the plaintiffs, said that the city has known since at least 2008 that there is an “enormous backlog” of sidewalks and intersections that are in disrepair. Among other things, the suit seeks a court order requiring the city to fix its public rights of way so that they’re safe and usable for people like Lawson. 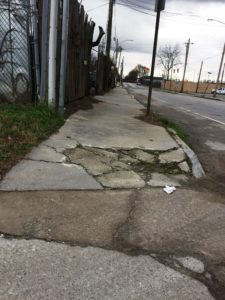 Cities like Portland, Oregon and Los Angeles have in recent years settled similar lawsuits with pledges of spending on sidewalks and curb ramps

In 2008, a city of Atlanta inventory suggested that fixing defective sidewalks, ramps and curbing would come to some $79.4 million.

Just two years later, the city revised that estimate up to $153 million in a report that also recommended setting aside $15 million annually for the works.

“The city has done very little to bring that backlog of disrepaired sidewalks and curb ramps into compliance and they have not budgeted the funds necessary to ensure that in the future, sidewalks and intersections will be compliant with the ADA and accessible to disabled people,” Radford said.

Indeed, the city did badly enough on an Americans with Disabilities Act audit that it signed a settlement agreement with the U.S. Department of Justice in 2009. Among other things, the city pledged to let the feds know how it would solicit feedback from people who have disabilities about where sidewalks need work.

The city spokesperson said that Atlanta is not in violation of the agreement as it is ongoing. “The City continues to address the identified needs and to cooperate with the DOJ by reporting its progress on an annual basis,” the spokesperson wrote.

(However, last year, a Department of Justice spokesperson said via email that the DOJ closed the matter on December 12, 2016.)

Sally Flocks has been advocating for safe, accessible crossings and sidewalks for years, as president and CEO of the nonprofit PEDS, Pedestrians Educating Drivers on Safety. She consistently asks Atlanta City Council to set aside more funding for sidewalk repairs. She’s also long said it’s unfair that the city requires property owners to fix up adjacent sidewalks, rather than the city maintaining them as a shared asset, as it does roads. 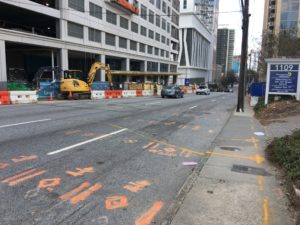 On West Peachtree Street in March this year a utility pole and construction barriers block sidewalks. Credit: Special to SaportaReport

Neither she nor PEDS is a party to the lawsuit, but she’s watching it closely.

“I think this is the only way that the city will ever get this done,” Flocks said.

There is some special spending set aside for sidewalks, but it’s unclear how much of the backlog it could clear.

However, the $38 million doesn’t appear to have made the cut. The Renew Atlanta site lists one major “ADA Ramp and Sidewalk” line item at $4.85 million to be spent across the city. The site also lists a dozen other much, much smaller projects under “ADA and Sidewalks.” Though complete street works will also include sidewalk fixes.

Then in 2016, city voters approved a 40-year transportation sales tax. Of that, some $69.6 million is recommended for “sidewalks and streetscapes,” as well as cash for complete street works.