When Emory doctors went to war 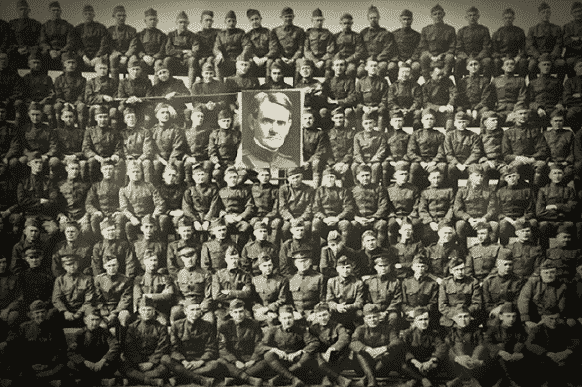 This week, REN DAVIS, an Atlanta writer and photographer, shares a story of Georgia patriots — the physicians, nurses, and medical staff who answered the call of World War I. 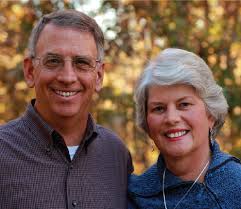 Only a small fraction of Americans now choose to serve in the military, many coming from the lower rungs of the nation’s economic ladder, and a declining number of political and business leaders are veterans. Circumstances were very different a century ago, when nearly all Americans, from laborers to professionals, put their lives and careers on hold and answered the call to serve in World War I. Atlanta and Georgia provided an excellent illustration of this patriotism and dedication.

In April 1917, shortly after America’s entry into the Great War, a call went out from the U.S. Army and the Red Cross to medical schools across the country. Doctors and nurses would be urgently needed to staff hospitals in support of the hundreds of thousands of newly enlisted “doughboys” who would soon head overseas to join British and French allies fighting Germans in the trenches snaking across Europe.

Emory School of Medicine answered the call. When dean William S. Elkin, M.D., received the request, he turned immediately to Edward Campbell Davis, M.D., to organize the school’s medical unit. Davis, a professor at the school and co-founder of Atlanta’s Davis-Fischer Sanatorium (later Crawford W. Long Memorial Hospital and now Emory University Hospital Midtown), had served as an Army surgeon in the Spanish-American War and retained his military rank. Without hesitation, Davis accepted and immediately began assembling a team of Atlanta’s and Georgia’s most prominent physicians, skilled nurses, and other staff for this critical assignment. To enlist support for Davis’s efforts, noted Atlanta writer and journalist Corra Harris urged readers to volunteer, writing, “Every doctor and every nurse that can be spared must be sent to France, and they must go at once.” 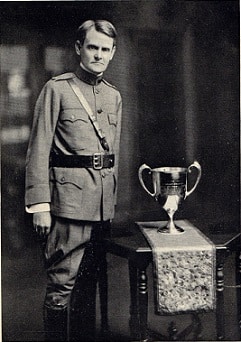 Edward Campbell Davis, professor and physician, formed the Emory Unit at the request of the Emory School of Medicine.

The initial call was to organize a 500-bed hospital to be funded through popular subscription. Recognizing the scale of this endeavor, however, the federal government in August 1917 appropriated $40,000 to equip the Emory Unit, soon to be officially designated Base Hospital 43.

Base hospitals were the fourth tier of a complex military healthcare system. The first tier were aid stations near the front lines, where casualties were brought by stretcher for assessment. A few miles to the rear and accessible by ambulance were field hospitals, where patients were triaged by severity of injury or illness; those with minor wounds could be treated and returned to the front lines, while others would be transported to evacuation hospitals. These facilities, predecessors to the M.A.S.H. units from World War II and the Korean War, were the destination for urgent surgical or medical care. Once stabilized, patients would be taken by train to the large, permanent base hospitals for extensive surgical or medical treatment and convalescence.

Throughout the fall and winter, before leaving for Europe, Emory Unit physicians and nurses attended courses in military and combat medical care while awaiting word of the unit’s activation and training. A local fundraising campaign by the Atlanta newspapers netted $7,000. At a Piedmont Driving Club celebration, Davis was presented with the check (used to purchase a fully outfitted ambulance), while staff were given sweaters and Red Cross comfort kits.

Still, months went by — the usual military “hurry up and wait” — with no orders. Finally, in April 1918, unit officers received instructions to report to the recently constructed Camp John B. Gordon (present site of DeKalb Peachtree Airport) for basic training. At the same time, they learned that the unit’s hospital would be increased in size to 1,000 beds.

Finally, in June 1918 unit members traveled by train to Hoboken, New Jersey, and boarded the SS Olympic (sister ship of the ill-fated Titanic) for the voyage to Southampton, England. Due to logistical delays, unit nurses were held behind and did not join their colleagues for nearly a month. After a short channel crossing, the unit arrived in Le Havre, France, on June 23, 1918. A few days later, they were in the city of Blois. Emory Unit Base Hospital 43 of the Allied Expeditionary Force was now operational. 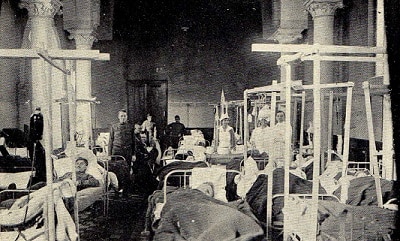 During the Emory Unit’s time in France, the capacity of the surgical wards at Base Hospital 43 was increased twice to handled casualties.

Utilizing existing hospitals and converted school buildings, Base Hospital 43 was soon expanded to 939 medical-surgical beds and 1,229 emergency beds. By mid-July, casualties began arriving by train from evacuation hospitals near Coulommiers, close to the battle lines at Chateau-Thierry and along the Marne River. Soon, the hospital’s census exceeded 700, most injured by gunshot and shrapnel wounds, with dozens of others suffering from poison gas attacks. To meet the growing number of casualties, two principal surgical teams were organized, one of which was then deployed to staff Mobile Hospital 1, providing frontline care for American soldiers fighting in the Meuse-Argonne offensive, the climactic battle to end the war.

Twice during these final months, Base Hospital 43’s capacity was increased to meet the desperate needs, the last time in mid-October, to 2,025 medical-surgical beds and 2,300 emergency beds. On November 10, 1918, the day before the Armistice would be signed, ending the war, the hospital’s census peaked at 2,237 patients. In the weeks and months after hostilities ceased, the hospital continued to care and treat hundreds of patients suffering from both combat-related injuries as well as the epidemic of influenza that was sweeping across Europe and the world.

On Christmas Day, Base Hospital 43 commander Lieutenant Colonel S. U. Marietta, received a telegram of season’s greetings and congratulations from Major General John J. Pershing, Commander in Chief of the American Expeditionary Forces. Pershing wrote, “Please accept for yourself, the officers, nurses, and men under your command, and patients under your care, my. . .admiration for. . .the spirit of loyalty and enthusiasm with which the personnel of your hospital have met their obligations.” 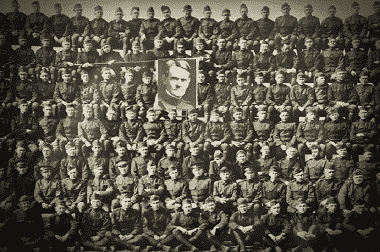 The Emory Unit drew doctors and nurses from across Georgia.

The unit remained in France, caring for ill and wounded soldiers until relieved from duty on January 21, 1919. Following a month of demobilization and packing, the unit’s veteran doctors, nurses, and enlisted personnel returned home to a rousing welcome at Camp Gordon on March 29, 1919. While the Emory Unit received citations for meritorious service from General Pershing, French field marshal Ferdinand Foch, and others, the greatest compliment may have come from a patient, a young Army lieutenant, E. H. Jefferies, from New York:

“Atlanta, you can be proud of Emory Unit and if you think you have any more like it, send them along, but you have to go some to keep up with Emory. God bless the people of the South. From a Northern Yank. . . .”

On September 2, 1942, the Emory Unit would be reactivated for service in World War II as General Hospital 43, serving in North Africa and France.

To learn more about the Emory Unit, check out History of the Emory Unit, Base Hospital 43, U.S. Army, American Expeditionary Forces (1919) and The History of Surgery at Emory University School of Medicine (Ovid Bell Press, 1979) by John D. Martin, M.D.

Georgia Humanities is a partner of the Georgia World War I Centennial Commission. To learn more about Georgia and World War I, read this overview, and our columns about fighter pilot Eugene Dobbs, the influenza epidemic of 1918-1919, and the impact of wartime propaganda.

Ren Davis, a graduate of Emory University, is a writer and photographer whose work has appeared in such places as the Atlanta Journal-Constitution, Georgia Magazine, and Atlanta Magazine. Davis and his wife, Helen, are the authors of several popular guidebooks and the award-winning Landscapes for the People: George Alexander Grant, First Chief Photographer of the National Park Service (UGA Press, 2015).