A scene from "Where the Crawdads Sing"

I still don’t know what a crawdad is or, for that matter, if it indeed sings. But that matters less to me than how surprisingly wispy “Where the Crawdads Sing” is.  Delia Owens’s debut novel was a phenomenon that, as of last winter, spent 150 weeks on the New York Time best seller list and earned well over $11 million (and that was in 2021)

Optioned by Reese Witherspoon, the book has now become a movie starring Daisy Edward-Jones, Taylor John Smith and David Straithairn. I guess it could be called a romance thriller courtroom drama. I had a few other names for it, but that doesn’t really matter. Let’s just say the movie didn’t make me mad. It didn’t make me much of anything. 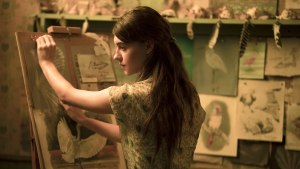 Daisy Edward-Jones in a scene from “Where the Crawdads Sing”

Kya (Edward-Jones) is one of those feral wild things who lives by herself in the wilderness (think Jody Foster’s Nell, but cleaner and better behaved). She did have family, but Daddy was abusive, and one by one everyone left. So, Kya sets up housekeeping in the middle of the North Carolina marsh, digging up mussels and trading with the kindly Black couple who run the nearby general store.

Kya doesn’t go to school because the other kids bully and tease her. So, she teaches herself at home, learning to draw the multitudes of flora and fauna that surround her. She also takes up with two guys.  The first, Tate (Smith), teaches her how to read and write- – and have sex.

Chase (Harris Dickinson), a kind of Cool Kid in Town, teaches her about picnics, greed – and how to have more sex. But one day Chase is found murdered, and the small-minded townsfolk figure it was Kya who done him in. Luckily, she gets a good lawyer – the ever-reliable Straithairn dressed in his best bargain-basement Atticus Finch white suit. 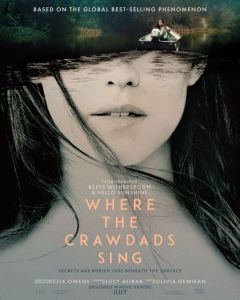 Movie poster of “Where the Crawdads Sing”

The film lacks emotional heft, to the point that we hardly care who killed Chase, or even, well, that he’s dead. Director Olivia Newman tries to fill her scenes with nature shots that simply aren’t in the same league with Terrence Malick. Or even David Attenborough.

Further, Kya must be the most immaculate wild child in recent memory. Her clothes look like she just stopped by the Laura Ashley store, and her cabin is all but spotless. That’s not a deal-breaker, of course, but it does lend the movie an air of unreality; her outlier status, which is crucial to the story, never sinks in. She’s a pretty girl and gifted artist living alone in a cuter-than-cute cottage.

So, when other characters talk about her as a “missing link” or “a “witch” or “Crazy enough to do anything,” it just doesn’t wash. I’ve seen nuttier people at movie screening (please make your own joke…)