A scene from “White Hot: The Rise & Fall of Abercrombie & Fitch"

As someone – Babe Paley? The Duchess of Windsor? – once said, “You can never be too thin or too rich.”

Add “or too white,” and you’ve got the Abercrombie and Fitch mantra of the late’90s and early ‘00s down pat.

This is hardly a surprise to anyone who mall-crawled during those years. But just how insistently – and behind-the-scenes ugly – the company played its hand is explored in the entertaining albeit lightweight new documentary, “White Hot: The Rise & Fall of Abercrombie & Fitch.” As for the rest of us, well, we may not care all that much. Still, anything that lifts the curtain on a company as ubiquitous and successful as A&F once was holds a certain interest.

Targeting a specific demographic is pretty much what retail is all about. But the extent to which Abercrombie went after that demographic is more than a bit disturbing when you learn about tactics that affected things like hiring practices and unspoken company policy.

To wit: to be considered attractive enough to work in the stores and not be relegated to graveyard shifts and stockroom clean-up, you had to be, well, thin, white, young and at least appear to be well-off.  As one interviewee says, the apparent ideal customer was a “corn-fed hunk from Nebraska.”

Not that there’s necessarily anything wrong with corn-fed hunks from Nebraska, but the clothing behemoth went after that image with a vengeance. This, Abercrombie insisted, is what good-looking looks like. If you don’t like it, you can take your dreadlocks and your urban vibe and go somewhere else. 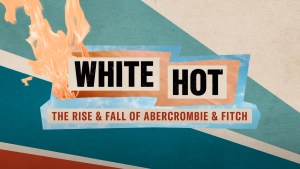 A poster of “White Hot: The Rise & Fall of Abercrombie & Fitch”

Filmmaker Alison Klayman lays out this philosophy with a flashy style that cannily – sometimes annoyingly – replicates her subject. She also takes the time to go behind the scenes, introducing us to the poisonous powers-that-were who laid out said philosophy, including the enigmatic (but certifiably dislikable) former CEO, Mike Jeffries, and the fabulous (but apparently predatory) celeb photographer, Bruce Weber.

Where the brand went wrong was in going too far. Its racist tactics ultimately resulted in class action lawsuits and a Supreme Court case (which the company lost). Where Klayman goes wrong is in failing to do much more than repeat the same observation over and over. The slick irony of half-naked young men selling clothing to a bunch of aspirational mall rats becomes belabored and repetitive. Left out is such cultural fall-out as the decline of malls and the rise of diversity as its own “brand.”

Jeffries, we’re told, declined to comment for the film, as did, one assumes, retail billionaire and BFF of the late Jeffrey Epstein, Les Wexner, who is credited with changing the retailer’s consumer image from Teddy Roosevelt to self-satisfied frat boy.

But we get the message. As someone tells Klayman, “They’ve crystallized everything I hate about high school, and they’ve put it in a store.”

“White Hot: The Rise & Fall of Abercrombie & Fitch” can be viewed on Netflix.