Yesterday, the White House announced its plan to help Historically Black Colleges and Universities (HBCUs) with funding after experiencing several threats of violence.

Vice President Kamala Harris, an HBCU graduate herself, announced that grant funds from the Project School Emergency Response to Violence (Project SERV) will provide short-term, immediate funding for local education agencies and institutions of higher learning that have experienced a violent or traumatic incident to assist in restoring a safe environment conducive to learning. 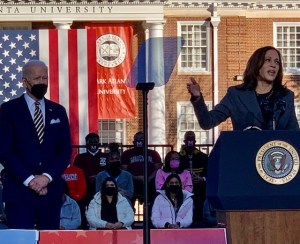 The Department of Education will work with the schools that received threats and will award grants ranging from $50,000 to $150,000 to address immediate needs including mental health resources or enhanced security.

From Jan. 4 to Feb. 16, the Federal Bureau of Investigations reported over 57 HBCUs, houses of worship and other faith-based and academic institutions have been the targets of these types of threats. This count does include the three threats made to Spelman but does not include the threats to Clark Atlanta and Morehouse on Monday.

SaportaReport has identified at least 34 HBCUs that have experienced threats since the beginning of this year.