A scene from "White Noise"

Not that Baumbach has totally succeeded. DeLillo’s 1985 dystopian novel, “White Noise,” is one of those famously unfilmable books, like “The Bonfire of the Vanities” or “Ulysses” (both of which, ironically, were made into films…disastrous ones).

Still, he’s taken a respectable swing at it, and the result is 2/3rds of a very good movie.

Set in the early ‘80s, “White Noise” focuses on Jack Gladney (Adam Driver), a Hitler specialist at the generically idyllic College-on-the-Hill. On campus, Jack is something of a celebrity, admired by colleagues like Murray (Don Cheadle) who’s trying to establish a similar niche reputation by teaching Everything Elvis. A scene from “White Noise”

At home, Jack is a borderline sitcom dad, married to Babette (Greta Gerwig), with a swathe of kids from their previous marriages (yes, plural) and one collaborative effort, an adorable blonde urchin.  The family is both cohesive and chaotic, the Brady Bunch by way of a collective nervous breakdown.

However, fate is about to send them something to have a nervous breakdown about. Radio reports about a nearby disaster have morphed from a plume of smoke to a black billowing cloud to a Canadian air mass to An Airborne Toxic Event!!!!

Everyone must evacuate, leading to a massive traffic jam worthy of Godard.

This is the film’s most successful segment, with scary/funny observations about how we behave in the midst of catastrophe. Having been routed to the supposed safety of the cheerfully named Camp Daffodil, Jack and Babette decide it would be better to strike out on their own, and their best bet would be to follow the Land Rover with the “Gun Control is Mind Control” bumper sticker. 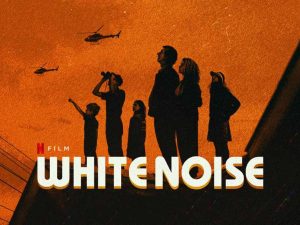 In the second part, normality has been restored except…what are those mysterious little white pills Babette keeps popping on the sly? Well, as can happen with DeLillo, they lead into a complex web of faith, fear, mortality, adultery, trust and the snacks section at the nearby A&P (including a Big Bollywood Finish in the overly bright corridors of said supermarket).

The all-singing, all-dancing finale is a doozy, the intervening material less so. While there is much in “White Noise” to admire (I especially loved DeLillo’s made-up consumerism – with things like Pretzel Pods and Pudding Pockets next to the Cheerios and Pringles), the picture’s core is uncertain.

That Baumbach, whose films include “The Squid and the Whale” and “Marriage Story,” manages to stay on DeLillo’s wavelength as well as he does is a tribute to his talent and his passion for the book. 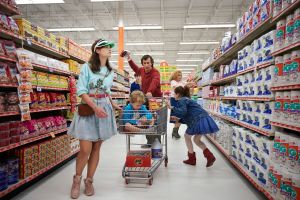 A scene from “White Noise”

Plus, he gets mega-help from his cast. This may be Driver’s best work yet; it’s a hilarious yet melancholy portrait of a white male’s mixed heritage of poisoned privilege (Do you want to be the one everyone is screaming at as catastrophe happens?) And Gerwig, who is Baumbach’s partner off-screen, as well as a fine director herself (“Little Women”), yet again etches a unique portrait in an uneven role.

The aforementioned Bollywood supermarket send-off has a dark side, too. Even as the cast leaps and twirls in apparent sheer exuberance, one glimpses a disquieting cinematic shadow. Namely, the chilling Dance of Death at the end of Ingmar Bergman’s “The Seventh Seal.”

What was it that Beckett said?  Born astride the grave?  Or was it Cleanup on Aisle Four?

“White Noise” is available for viewing on Netflix.