A scene from the "Wolf Hall" PBS miniseries

What a week for royalty it’s been.

First, Queen Elizabeth II was put to rest with the all the impressive pomp and circumstance the Brits can somehow still summon when needed.

Then, last Friday, literary royalty Hilary Mantel died “suddenly yet peacefully” at age 70. She won the Man Booker Prize twice for “Wolf Hall” and “Bring Up the Bodies,” the first two titles in her acclaimed trilogy centering on one of the greatest fixers in history, Thomas Cromwell (the third volume, “The Mirror & the Light” was long-listed). A scene from the “Wolf Hall” PBS miniseries

Having missed “Wolf Hall,” as the six-part PBS adaptation of the first two books was called when it aired in 2016, and having, in the interim fallen truly, madly, deeply for the series’ star, Mark Rylance, it somehow made sense to indulge in this double scoop of all things royal.

Simply put, “Wolf Hall” is delicious. Smartly put together and exquisitely acted, it’s a character study of sorts, much like “The Godfather, Part II.” You almost expect Cromwell to whisper to whatever courtier he’s just destroyed, “It’s just business.”

And Cromwell, who starts out as a blacksmith’s son, i.e., not the right class, is all business, whether serving Cardinal Wolsey (Jonathan Pryce) or King Henry VIII (Damian Lewis). He cannot serve both, it becomes clear, once Henry’s obsessive search for a son means ditching one wife (Catherine of Aragon) for another (Anne Boleyn). Which ultimately means ditching the Pope and the entire Catholic Church.

“Wolf Hall” centers on this politically charged time, with its betrothals, betrayals and beheadings. The posturing, egomaniacal Henry presents one sort of problem, the kittenish, silken Anne quite another. And then there’s Henry’s old friend, Sir Thomas More (Anton Lesser), aka, A Man for All Seasons, who refuses to back his king when it comes to bolting from Mother Church. The confrontations between him and Cromwell are chilling in their cold-eyed manipulations. More wants to style himself as a conscience-ridden martyr and Cromwell simply won’t have it. 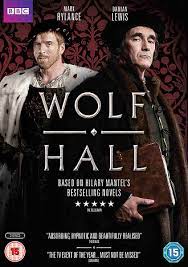 A poster for the “Wolf Hall” miniseries

And when Cromwell finally wins, we see that More’s outrage has as much to do with losing the game as it does losing his head.

The entire cast is superb, and the director, Peter Kosminsky, wisely puts them front and center. This is not what you’d call a sumptuous production. If anything, it feels a little underpopulated, but that keeps our attention where it should be (though there’s an on-going joke about Anne being flat-chested and, sure enough, her bodice never quite fits).

The look on Rylance’s face pretty much says it all. He is a viper.  Best keep him at arm’s length.

EXTRA CREDIT: William VanDerKloot, a superb local filmmaker who was working here when the MCU (Marvel City Universe) was just a gleam in Stan Lee’s eye, presents his documentary “Inside the Warren Commission” at the Atlanta History Center on Wednesday, October 5, at 7 pm. A Q&A with VanDerKloot and others featured in the film will follow. The evening is presented under the excellent auspices of the University of Georgia Libraries. Tickets for History Center members are $5. $10 for everyone else. It should be well worth it.