Yes, recent campaigning is historically nasty. But it’s sort of always been like this.

An 1808 broadside attacks someone named Sullivan. It's not clear from the full ad who he is, but it goes on to attack President Thomas Jefferson as a friend of Napoleon Bonaparte and an enemy of commerce. Credit: Library of Congress.

Kerwin Swint wrote the book on negative campaigning some 15 years ago. But the Kennesaw State University professor said he’d edit it based on what he’s seen in the last four years.

“The hallmark of a really dirty campaign, I think is personal nastiness,” said Swint, director of KSU’s School of Government and International Affairs and author of Mudslingers: he Twenty-Five Dirtiest Political Campaigns of All Time. “When candidates just really are nasty to each other and hate each other, and you can see it.” 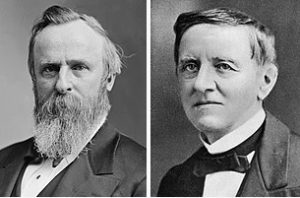 Negative campaigning had a golden age before about the 1890s. Take the U.S.’ centennial year presidential election in 1876.

Democratic operatives accused Republican Rutherford B. Hayes of “shooting his mother in a fit of insanity.” And after an election so close and dirty that it ended in a weird one-off compromise, opponents called him Rutherfraud B. Hayes.

Republicans said Democratic nominee Samuel Tilden — ol’ Slippery Sammy — was a criminal, a disgrace to New York state and a menace to the country.

Political scientists study questions like whether negative campaigning is on the rise as a share of all campaigning, and how and why exactly campaigns decide to go negative.

Though, the candidates and political consultants that Swint interviewed denied it exists at all. Except for telling outright lies or maybe talking about candidates and families’ personal characteristics.

But negative campaigning certainly exists and it comes in degrees.

“Some of it is fair game, some of it is comparative and contrasting and record-based,” Swint said. “But yes, a lot of it is manipulating information, making up stories, smear campaigns, that sort of thing.”

The “Wild West” of negative campaigning went fairly tame for a couple of generations after the 1890s, with the rise of mass media, sound recordings and modern journalistic standards.

An 1856 ad likens Democratic presidential candidate James Buchanan to a jackass for saying 10 cents a day would be a fair wage. “Hunkers” are a long-gone political faction. Credit: Library of Congress

That was when Lyndon B. Johnson’s presidential campaign ran the “Daisy Girl” ad. It opens with a little girl counting flower petals in a field, followed by footage of a nuclear explosion and the drawling Texas Democrat starting his pitch with, “These are the stakes …”  The stakes of electing Republican Barry Goldwater, that is. Who wasn’t even mentioned in the ad.

In his No.1 mudslinging spot, Swint put the Alabama Democratic gubernatorial primary runoff of 1970. In the basically one-party Deep South, the real contests were in Democratic primaries, and this one was between incumbent Governor Albert Brewer and arch-segregationist George Wallace.

Brewer had the reputation of being a gentleman, and for a white Southerner of the time, a moderate. Wallace was a brawler who used mass media and speeches to openly campaign as a racist and play on white Alabama racism.

Wallace called Brewer a “sissy britches” and Wallace sympathizers printed up and distributed circulars accusing Brewer of being gay. Another unofficial ad showed a fake photo of Brewer standing with Elijah Muhammad and Muhammed Ali (which did not happen) with the declaration that Brewer would turn Alabama over to Muslims. Other unofficial and false Wallace material announced that Brewers’ daughters had become pregnant by Black men and that his wife was an alcoholic who had sought treatment. Wallace did not call off these supporters’ efforts.

But even the official ads were bad too, like a Wallace anti-Brewer ad that showed a little white girl on a beach, surrounded by seven little Black boys. The caption? “This could be Alabama four years from now! Do you want it?”

Brewer though, responded as sort of a Mr. Clean, as Swint put it, with ads that said things like “Good grief, Mr. Wallace!”

Even though negative campaigning has a, well, negative reputation, it exists because on some level it works.

“It’s not that you’re trying to persuade somebody of something that they don’t believe or that is not true,” Swint said. “You’re trying to mobilize a feeling, a perception in [the voter] in a way that benefits your candidate.”

The negativity has to be believable or it won’t work. As an example of a bad ad, Swint suggested a Club for Growth ad this year on behalf of Georgia Republican Senator Kelly Loeffler. The ad accuses her opponent Rep. Doug Collins of being on the side of U.S. House Speaker Democrat Nancy Pelosi, among other sins.

In fact, Collins is a steady Trump ally and it’s not exactly credible that northeast Georgia’s deep red Ninth Congressional District would elect a liberal.

But Swint also said that if he were writing the book today, those presidential campaigns would be in it, because they’re like nothing he’s seen before.

It’s something about President Donald Trump and Trump as a candidate that brings out viciousness on both sides, Swint said.

To Trump’s followers, the president represents the mainstream versus the elites, Swint said. And to Democrats, Trump represents a threat, something that is immoral or dangerous.

“And so it brings out on both sides, this is hostility, this viciousness that characterizes our politics right now,” Swint said.

And his closing thoughts are a little depressing. Negative campaigning is as old as the country itself and it will probably always be with us.