“Sit your behind down and let’s complete this application!” It was approaching midnight and Ms. Brenda was not going to allow her son’s close friend let this deadline pass. She recognized his talent and potential. And as a single-mother, she knew all he needed was some direction and support. “I won’t get in, and even if I do, I can’t afford it,” he muttered softly as he submitted his college application with a few minutes to spare. 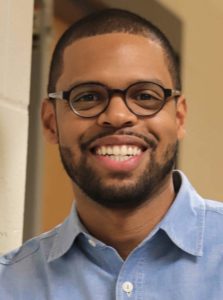 College seemed so out of reach for him, a kid who grew up in a working-class immigrant family. His parents fought hard to stay together, but the daily stress of hard work while feeling like they could never get ahead finally broke the family apart. Without the structure and presence of a male figure, the teenager began drifting through school without a clear purpose or direction. He soon dropped out of after-school programs, became disinterested in school, and started working at Waffle House to augment family income.

Why even care? Look around, what was there to aspire to?

Before he left Ms. Brenda’s house that night, she wrapped her arms around him and said, “I’m proud of you. Sometimes all you can do is try and then let God work.” As the young man drove off, her smile faded. For Black students from disadvantaged backgrounds like her son and his friend, the odds of landing a coveted college spot were slim.

In the City of Atlanta, the lack of opportunities for Black youth and families that perpetuates the cycle of poverty is not the exception — it’s the rule. 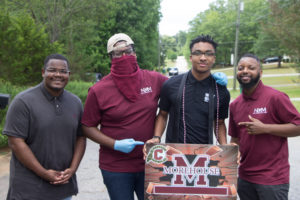 The Class of 2020 included a core who fostered a fellowship through Next Gen. Courtesy of Phil Olaleye

Though the city has one of the fastest-growing economies in the country, it also has the nation’s worst income inequality. The pay gap between the rich and the poor is the highest of any major city. Wages are still low, with 40% of jobs in metro Atlanta paying less than $15 per hour, and nearly one in three (29%) Black households live in poverty, struggling to meet basic needs. Just 2% of white families live below the poverty line.

It was not that long ago when Atlanta was being hailed as the “Cradle of the Civil Rights Movement,” as local Black and white leaders worked together and fought for voting rights, and economic and educational opportunities for African Americans. But more than 50 years later, it feels like not much has changed. Atlanta is creating opportunity, but just not enough for long standing residents — especially Black folks.

COVID-19 has made an untenable situation for Black families even worse. An increase in rent, a lost job, or unexpected illness can easily push a stable family toward housing, economic, and health insecurity, leaving parents with impossible choices.

Who is impacted the most? Our city’s youth. Atlanta’s future. Black youth are more likely to attend lower performing and under-resourced schools that have to make tough budgetary decisions between academic, enrichment and social support for their students. 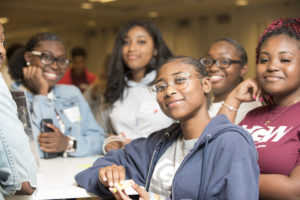 Networking Night provides young Black Atlantans an opportunity to build relations that can help each of them reach great objectives. Courtesy of Phil Olaleye

In these high schools, students average less than 10 minutes of college and career counseling a year. Contrast that with white, higher-income students whose parents spend nine times as much on educational and career enrichment for their children. This Black student disparity in resources and support leads to lagging graduation and post-secondary attainment rates. A lack of credentials and post-secondary training decreases opportunities for future gainful employment — resulting in a cycle of poverty that continues to hold a firm grip on our city’s Next Generation.

That spring, the young man received a small envelope from the school he had told Ms. Brenda was “out of reach.” With a look of resignation, he opened the letter and his eyes got big. It wasn’t a rejection, but an invitation to tour the university with Black prospective students from across the country. That weekend was magical. He met college students, sat in on classes, and slept in a dorm. He also found out that, despite the odds stacked against him, he had been accepted.

That young man went on to graduate from Duke University, serve his country as part of the United States Peace Corps, attend Harvard’s Kennedy School of Government and return home to pay it forward — first as a City of Atlanta director of Workforce Development, and now as the executive director of Next Generation Men & Women (Next Gen). 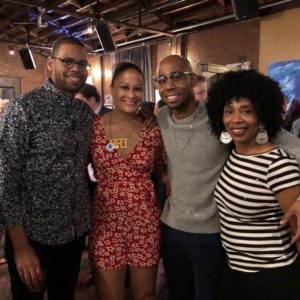 Today, Next Gen builds a diverse community of “Ms. Brendas” who support under-resourced Atlanta high school students by creating a pathway to graduation and future success through exposure to local colleges, companies and after-school mentorship. It takes a village to create systems of opportunity and build a future where hardworking families can prosper and every child can thrive, regardless of their ZIP code or race. Next Gen believes that if every youth can see it and experience it, they can become it. And as a young person, there is nothing more powerful than creating a vision for the future that excites you — and having the support to make it a reality.

That teenager’s story is the story of every Next Gen student, and too many local Black youth to count. Yet, it is not their story alone. It is the story of all of us and the community we want to create.

Ms. Brenda saw a brighter future for that young man than he could see for himself, and I am forever grateful. Why? Because I was the teenager whose life she changed forever.

Now it’s our turn to do the same for the Next Generation.

Note to readers: Phil Olaleye is the executive director of Next Generation Men & Women (Next Gen), an Atlanta-based monprofit that leverages community to create a four-year intensive after-school program rooted in exposure and mentorship. Next Gen currently serves 320 students across 5 high schools in Atlanta Public Schools and Fulton County Schools, and partners with 60 local colleges and companies.

Previous Article
Vocalist/guitarist struggling through the pandemic on virtual concerts, music sales
Next Article
St. Simons to sea turtles: ‘We’ll be here. Waiting. (For as long as it takes)’