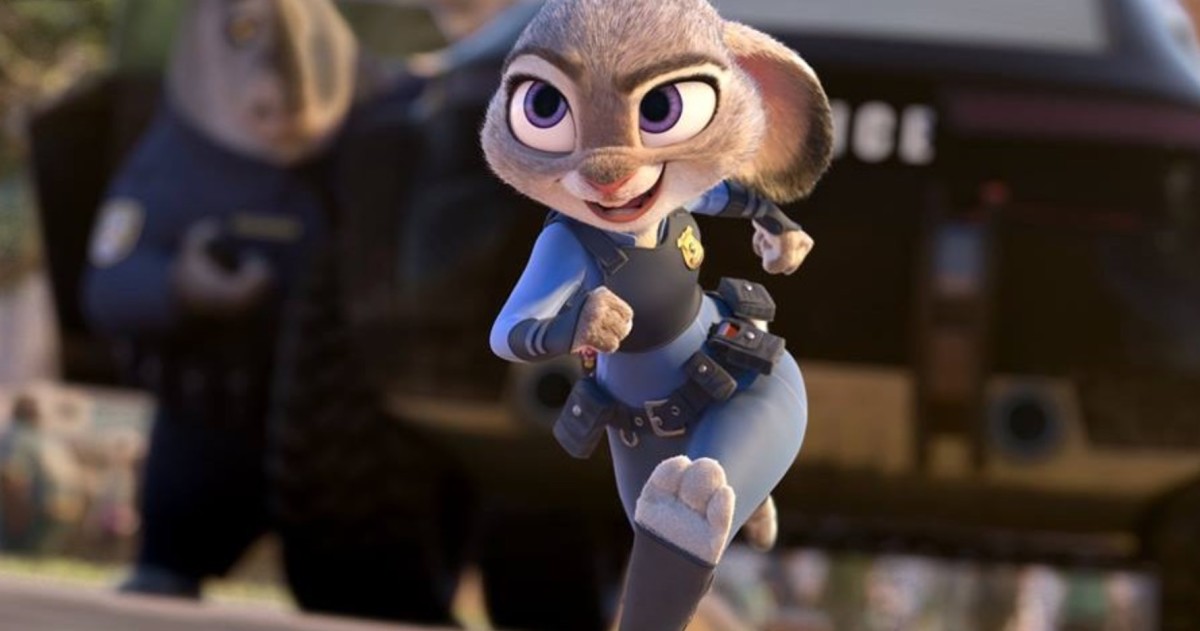 In “Zootopia,” the sensational new animated feature from Disney, not only does the lion lie down with the lamb, they work together, take yoga classes together, and shop at the same stores.  So do rhinos and tigers, giraffes and jaguars, wolves and voles.

Still, while predator and prey may be one big happy family in this anthropomorphized animal kingdom, certain prejudices linger. 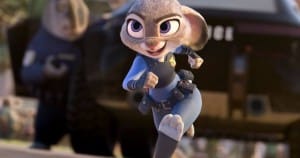 Judy Hopps (Ginnifer Goodwin) is an eager-beaver bunny who wants to leave the family’s carrot farm and become a police officer. Credit: thesfnews.com

Foxes, for example, are still considered shifty and untrustworthy (A can of Fox Repellant is always handy). And a rabbit on the police force? Don’t make the hippos giggle.

However, they haven’t meet Judy Hopps (Ginnifer Goodwin), an eager-beaver bunny who doesn’t want to spend her life working with her 275 siblings on her parents’ carrot farm.  She wants to go to the big city and join the menagerie in blue.  Besides, she’s always been taught that, in Zootopia, anyone can be anything.

Once there, however, she’s greeted with derision – especially by her new boss. Chief Bogo (Idris Elba), a Cape buffalo, takes one look at his new recruit and assigns to her parking duty.  The rest of the force is trying to solve a missing predators case – 14 disappearances in just a matter of days.

Somehow – inevitably? – Judy ends up on the case, too. Her partner, however, isn’t another mammal in blue; he’s a scuzzy con-artist fox named Nick (Jason Bateman) whom she coerces (i.e., blackmails) into helping her. The thing is, Nick isn’t just sly; he’s streetwise, too, and his cynical approach balances Judy’s hop-first-think-later energy. 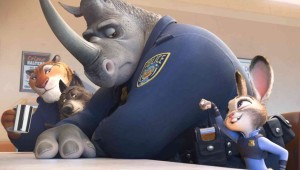 Officer Judy Hopps is determined to win her place on the squad by helping to solve a missing predators case. Credit: dconheels.com

What they uncover is a bit like ‘Chinatown” crossed with ‘The Island of Dr. Moreau.”  Which is to say, the plot is admirably intricate with all sorts of noir-ish touches and a dash of weird science. A shrew emulating Brando in “The Godfather” is funny if you know the movie. However, it’s still funny if you don’t (I’m guessing a lot of six year-olds are as yet unfamiliar with Coppola’s masterpiece.) And oddly enough, one of the most adult in-jokes – that the DMV is manned by a staff of sloths – drew the most kid laughs the screening I caught.

“Zootopia” isn’t just narratively creative; the visuals are flat-out jaw-dropping, as well. We’re taken to neighborhoods all over Zootopia – like Little Rodentia and  TundraTown. A monorail zips through an Amazon rain forest, then underwater. And there’s a sequence with a runaway subway car that is every bit as thrilling as a similar scene in one of the Spider-Man movies.

Best of all, perhaps, is the voice talent.  Bateman seems to be channeling Bill Murray – laid-back and sarcastic.  He likes to mess with Judy, dubbing her “Carrots.” Meanwhile, Goodwin (“Once Upon a Time”) somehow suggests Holly Hunter’s infant-obsessed cop in “Raising Arizona” topped off with a healthy dollop of Amy Poehler’s eternally optimistic Joy in ”Inside Out.”

Speaking of which, much like this year’s Oscar winner for Best Animated Feature, “Zootopia” is as much of a treat for adults as it is for kids.   You don’t need a child to buy a ticket, but if you feel you need one as a “cover,” do it. Immediately. This movie is about as good as it gets in the post-Oscar, pre-summer lull. Actually, it’s about as good as it gets at the movies all year.