If metro Atlanta voters aren’t willing to pay higher taxes to ease traffic congestion and promote schools and development, that’s not the message they sent in Tuesday’s elections. 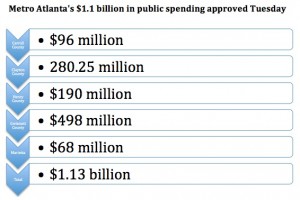 Click on the chart to see a larger image of spending approved by voters in metro Atlanta. Credit: David Pendered

Voters approved more than $1.1 billion worth of spending in five jurisdictions – $852 million for projects including roads and urban renewal, and $280 million for the Clayton County school district.

The outcomes are of note in a region where voters, just last year, rejected by a 2:1 margin the proposed 1 percent sales tax for transportation improvements.

A quick side-by-side comparison was not available online of the projects that were on the TSPLOST referendum last year and those that were approved Tuesday.

Here is a snapshot of election results of projects that relate to mobility, education and economic development: