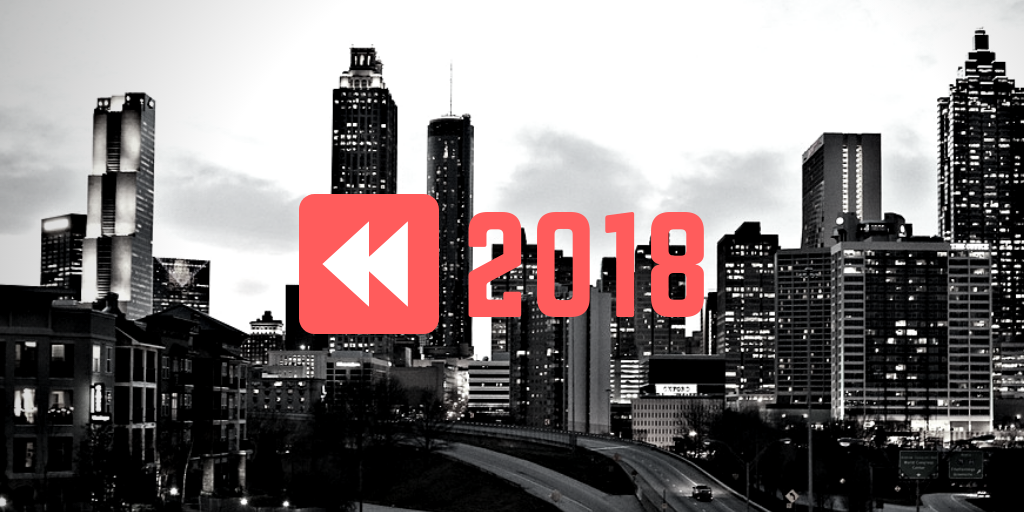 The following is a compilation of the 18  best, worst, and most important trends and developments emanating from within and throughout metro Atlanta and the state of Georgia for 2018.

This list was compiled by me with input from people within SaportaReport and beyond. 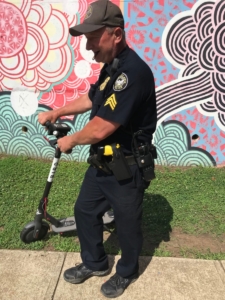 It seems like overnight eScooters, such as Bird and Lime, littered the sidewalks of Atlanta. Initially a novelty, eScooters have become a vital last-mile option for intown residents.

So much so that 2019   is shaping up to be the year when these companies will be regulated. Scooter companies are poised to be a continuation of the last-mile disruptors that predecessors Uber and Lyft introduced the past few years.

Your neighbors don’t like you. 2018 was a banner year for private messaging apps such as GroupMe, the already-popular WhatsApp and neighborhood address-only verified website, Nextdoor.

These apps and websites represent the pulse of both the best and worst of passive-aggressive and blind behavior. Neighborhood-centric websites like Nextdoor and Facebook pages, such as West End Neighbors, represents the best and worst experiences of online groupings, particularly those in gentrifying neighborhoods.

Of course, Facebook pages can be both informative and nostalgic. Skip Mason’s Vanishing Black Atlanta History Facebook page features some of the best near-daily conversations and quick bites of the history of “Old Atlanta” through the lens of everyday people. 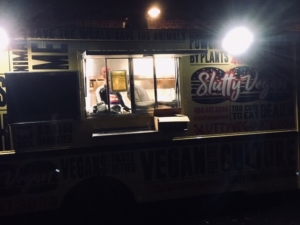 The food truck idea was birthed by a desire for vegan junk food, and it has developed a word-of-mouth following with customers waiting for hours.

15. The Burbs are getting more urbanized

2018, was the year the Atlanta suburbs finally made the turn towards urbanization. Most of these urbanization efforts have followed Main Street or town square formats.

Gwinnett has emerged as ground zero for new large-scale urban projects in downtown Lawrenceville (that started 15 years ago by Emory Morsberger), Infinite Energy Center’s redevelopment and the 103-acre site off Jimmy Carter Boulevard on Interstate 85.

Gwinnett isn’t alone. Denser urbanized projects can be seen in the suburban cities of Brookhaven, Alpharetta, and Dunwoody. These kind of developments now are as far away as Villa Rica, Kennesaw, and Forsyth.

Avalon is still the gold standard for urban-suburban developments, but it could get competition as early as 2019.

The Atlanta based company are led by one of Billboard magazine’s executives of the year. It is one of the few labels to successfully use social media, YouTube and data metrics translate to multimedia success.

The company racked billions of streams, multiple hit albums on billboard and dozens of radio hits, for every week of the calendar year.

Led by Gwinnett County-based trio, Migos, whose January 2018 rap album sequel Culture II debuted at No. 1. This was led by hit albums from rookie Atlanta-based rappers Gunna and Lil Baby with top-10 albums on their own. The duo, City Girls, became the first female group since “The Pussycat Dolls,” to be in a No. 1 song as they appeared on the Drake single – “In My Feelings.”

This would be noteworthy on its own. It also was the management team behind the bonafide breakout star of all media in 2017-18, the multi-platinum, multi-hyphenate Cardi B, whose stardom in 2018 defied gravity.

13. Arts and Culture gets out the box

2018, the Atlanta art scene took historic steps being out of the box.

Incumbent institutions such as the High Museum had its most innovative and diverse year ever.  Monster hit “Infinity Mirrors” capped off a year that included such achievements as the retrospective exhibition on Tommy Smith’s and John Carlos’ 1968 Olympic protest, Winnie the Pooh and new sculptures by Yuri Suzuki.

The trap got institutionalized by Atlanta rapper – TI – with the Trap Music Museum, a combination of pop art and actual Atlanta musical history. Dedicated to the culture surrounding actual trap music and given this city’s relative love/hate relationship, it’s a much needed cultural signifier.

TILA studios based in East Point, the best independent art studio and collective this year, has managed to forge itself as a distinct breeding ground for promising black female artists in Atlanta. All were outside of the traditional art gatekeepers and produced a variety of quality, daring exhibitions throughout 2018.

The Atlanta Beltline, Art on the Beltline

2018, was the year the Atlanta BeltLine finally broke out and became much more daring. Led by Arts and Culture Program Manager Miranda Kyle, the BeltLine’s 2018 has addressed head on the role of the art in gentrification and placemaking in ways atypical to Atlanta.

Off the Wall, the Super Bowl 53 Mural project 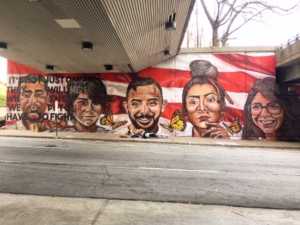 In an effort to highlight Atlanta’s history and culture in anticipation of the February 2019 Super Bowl, Off The Wall is setting a standard of what is the potential of public-private participants in street art. Lead by WonderRoot in conjunction with the Atlanta Super Bowl Host Committee, one of Atlanta’s most impactful arts organization. Throughout 2018, the collaboration has unveiled 15 of the 30 murals that will be dispersed throughout Atlanta, all of which were created by local artists.

12. End of Creative Loafing (?) and rise of Atlanta podcasting

2018 brought about the debate-able demise of a great alternative weekly paper in Creative Loafing Atlanta. Creative Loafing’s combination of hard news, oddities, culture and alternative political opinions has left a void in Atlanta that hasn’t fully been filled.

2018 saw the creation of hundreds of podcasts in Atlanta, and these are a few that really took off in 2018.

We can’t forget the “How Stuff Works” empire, based in Ponce City Market, which added more programs to satiate it’s growing audience of millions of listeners across the globe. 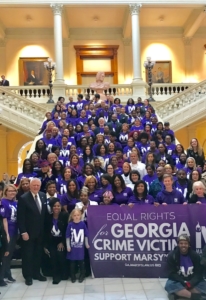 Nathan Deal with supporters of Marcy’s Law. One of the criminal justice amendments that passed this November
– Photo by Kelly Jordan

2018 brought about the beginning of a much-needed overhaul of the criminal justice system. Gov. Nathan Deal, a Republican, and Atlanta Mayor Keshia Lance Bottoms, a Democrat, signed reforms to the decrepit cash bail system.

Deal also signed into law more funding for pre-diversion programs, decriminalizing traffic offenses and accountability courts for lower level offenses. This win for Deal would be offset by a lack of diversity in his appointment of mostly conservative judges.

Seven of the nine current Supreme Court judges have been appointed by Republicans, which is problematic.

Bottoms ended Atlanta’s relationship with Immigration Customs and Enforcement (ICE) as a detainee center. While noble, Atlanta only houses about 10 percent of all ICE detainees statewide.  Also, the city of Atlanta has been tiptoeing towards closing its jail, a move that is expected to gain traction in 2019.

2018, also brought about limited marijuana decriminalization in Fulton County, following the city of Atlanta’s lead in 2017. Marijuana is still illegal, but now it only involves fines rather than jail time. This is a welcoming move, and we hope neighboring counties will follow suit in 2019.

Check back next week for part 2 of biggest trends as reported by King Williams.

State cash for metro transit? Some GOP candidates more on board than others
Better Hearts Better Cities