MARTA is taking steps to reduce the number of clients who receive free door-to-door service in an effort to curb the program’s costs as the number of eligible riders has risen 46% in a five-year period. 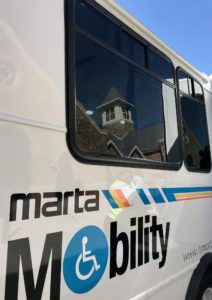 MARTA’s paratransit program is serving a ridership that has increased 46% in five years. Credit: Kelly Jordan

The new rules comply with the federal Americans with Disabilities Act of 1990, according to MARTA. The ADA requires public transit providers to deliver free origin-to-destination paraservice for medically disabled individuals. MARTA determines eligibility on a person’s ability to get on and off buses and trains without assistance, as opposed to relying on a medical model to determine eligibility.

MARTA has recorded a 46% increase in the number of clients approved to receive free MARTA Mobility service. The growth was recorded between 2014 and 2019.

The number of enrolled clients grew from 9,323 clients to 13,623 clients during that that five-year time frame.

This information is contained in a request for proposals MARTA issued Nov. 23. MARTA is seeking to hire a contractor to take over the assessment of existing clients and future applicants. Proposals are due by Jan. 21, 2021. An anticipated award date does not appear to be cited.

Those potential savings are a function of the number of riders served.

MARTA’s RFP describes the paratransit service that is offered and the process by which the new screening measures were designed:

The RFP notes that MARTA bases eligibility for paratransit on a functional, not medical, evaluation of a person’s ability to get on and off a bus or train:

Helping Atlanta do what is hard, but right