Okeeba Jubalo had no interest in being your typical “starving artist” before finding financial success, so he flipped the script. For the past 19 years Jubalo, whose paintings are considered “real edgy and real raw” has been perfecting a new and somewhat controversial business model for artists. Now the 40 year old art entrepreneur is considered an industry game changer. 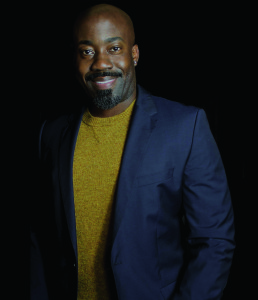 Shortly after graduating from The Art Institute of Atlanta, the Charleston, South Carolina native says he realized the traditional “artist platform, artist protocol is not profitable.”

“What I noticed was even when you partner with galleries, you give them 50 percent of whatever you sell but there’s no upfront advance on that 50 percent,” Okeeba laments. “I have to create all the work then hand it off to Joe Blow to sell it. Nah. That’s how it was, but the systems I put in place; I don’t do all that waiting. I hand out the contracts instead of contracts being handed to me, because I noticed when folks hand you the contract, it’s a contract written to benefit them. I flipped the paradigm.”

And Jubalo has effectively employed that business philosophy in all of his multiple entrepreneurial endeavors. In addition to his art enterprise, Okeeba owns a catering company, a marketing and graphic design firm and a top quality quarterly magazine that appeals to the young Black entrepreneur demographic. Each business feeds off the other. 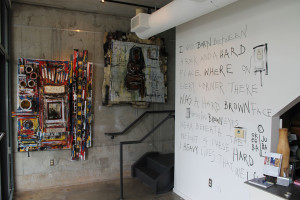 “The Dirty Dozen” exhibition at the September Gray Gallery in Atlanta. Photo: by Altore Alston

“I own a catering company and typically what most companies do, they’ll invoice you and they’re 60 days in the hole waiting on their checks,” he explains. “I flipped that to the point where I invoice you ahead of time, make you pay for the 30 days that’s coming, so I’m never in the hole.”

While painting is Jubalo’s passion, and the core of his creative expression, business has always been a byproduct. As a 7 year old he sold Chilly Bear ice cups out of his back door. Later in life Jubalo admits he was a profitable drug dealer for eight years.

“I worked at McDonald’s, but I sold drugs, also, using McDonald’s as a front to do that,” he says. “I had people come through the drive-thru. I’m just being transparent. My friend, now, is serving 35 years in federal prison because he kept going. I had my first daughter, got married, and I stopped fooling with it. I said, ‘Man, I got to make this art work for real’.” 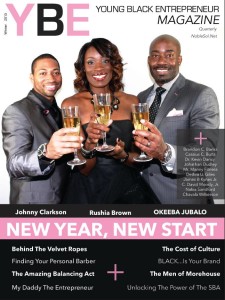 Now this hustler and new breed businessman has become adept at selling his fine art using the same principles he learned in the drug game. His work is favored, sponsored and supported by Atlanta’s James W. Jackson, who is arguably the nation’s foremost African American art collector. Jubalo’s art is featured prominently throughout Jackson’s home and his adjoining art gallery.

“Okeeba Jubalo is a modern Renaissance Man,” opines Jackson. “He is an accomplished artist, and, an astute businessman; talents not usually found in one unique individual. He is ubiquitous in sharing his artistic talents through his thought provoking art work, and, in business through his (YBE) Young Black Entrepreneur Project. I am proud to have his art work in the collection and to call him a friend.”

“Art allows me to have conversations with people that I normally wouldn’t have it with,” Jubalo says. “It opens up the doors because it’s a luxury item. My fine art connected me to James Jackson and so many other James Jacksons’ to the point where they know me as a fine artist, but James also knows this side of me and the other side. He’s like, ‘Okay, Okeeba, we see all that you do’.” 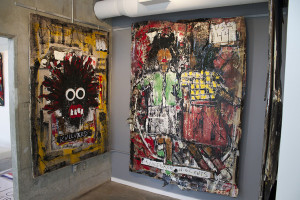 “The Colored Section” of The Dirty Dozen exhibition at the September Gray Gallery in Atlanta. Photo: by Altore Alston

Okeeba Jubalo’s art works are bold, big and breathtaking. They often dominate. And they are uncommon. He only produces 12 painting a year.

“A collector who has my work knows that he or she will not see it everywhere and it’s rare,” he says. “The right blue-chip collectors in the city, they know me. The average collectors don’t.”

And, when asked why he specializes in painting big pieces of art, he says: “Because big walls mean big money. My thing is if I’m going to do something, I’m going for the big money. Whether it’s a museum or somebody’s personal house. Small pieces mean small money. My thing is let me go as big as I can go and then suck people into it. When you standing in front of it, it pulls you all the way in. Especially, if it’s big as the whole wall.”

Jubalo had once studied to be a Pan African Studies professor; now instead he uses his canvas to teach and preach the African American experience. 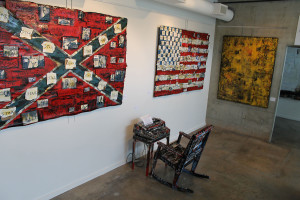 The Dirty Dozen exhibition at the September Gray Gallery in Atlanta. Photo: by Altore Alston

“ One of the pieces that James Jackson has takes different photos from our history, from our time in America and tells those stories because when we fast forward to 2016, a lot of us don’t even know what’s going on, especially the younger generation,” he says

Okeeba is a matter of fact man; an often blunt, articulate, no-nonsense authentic art entrepreneur and urban intellect. He impresses people as being the kind of man that the late ESPN sports anchor Stuart Scott would call “as cool as the other side of the pillow.”

“I spent summers in Mississippi and I’ve dealt with the Klan,” he says. “I come from a line of Black men who didn’t play them games. My mom’s side of the family was cowboys, blacksmiths and farmers. My dad’s side was the hustler, the streets, the New York drug game. I always had that mix of the two in me. Being creative I could always apply that on either side. It was either I could be a good dude, or I could be an evil genius. Sometimes it would teeter depending on the situation. 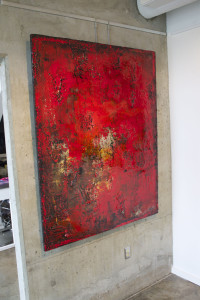 “Selma” in The Dirty Dozen exhibition at the September Gray Gallery in Atlanta. Photo: by Altore Alson

“My thing is,” Jubalo adds, “I’m who you go and get when you want that real fight. I don’t mince any words. I don’t play around. I don’t play the games that White folks want you to play in order for you to get in their doors.”