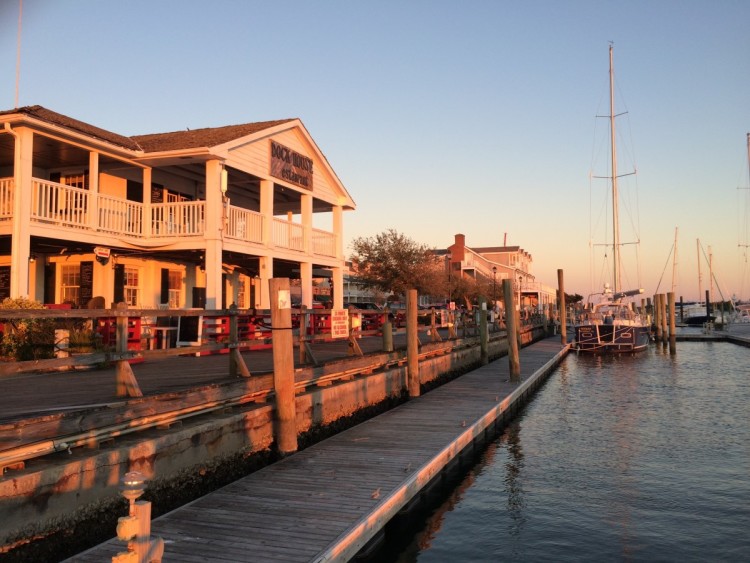 BEAUFORT, N.C. – North Carolina is building four bridges to improve access to the Outer Banks, slivers of sand with economic value as tourist destinations and communities of commercial fishing. 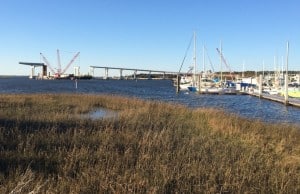 The new bridge in Beaufort, N.C., over Gallant’s Channel, will bypass the former fishing village and speed tourists toward the ferry that will whisk them to the Outer Banks. Credit: David Pendered

Gov. Pat McCrory led the groundbreaking Tuesday on the granddaddy of the bridges – a 2.8-mile-long span over Oregon Inlet. The $246 million bridge is the northern gateway to the island chain and is to replace the existing Herbert C. Bonner Bridge.

The ceremony came after five years of litigation over environmental issues. The lawsuits were filed by Southern Environmental Law Center on behalf of the Defenders of Wildlife and the National Wildlife Refuge Association

“To see this project actually break ground will be a great day for the people who live and work on the Outer Banks and throughout North Carolina, as well as millions of visitors from across the state, nation and world,” McCrory said in a statement.

The bridge is designed for greater safety and less maintenance than Bonner Bridge. The high rise portion of the bridge will be 3,500 feet long. Seven spans will be about 300 feet wide, to provide more options for boats navigating under the bridge. That will reduce the need for dredging, compared to the current bridge that has just one navigational opening that’s 130 feet wide. 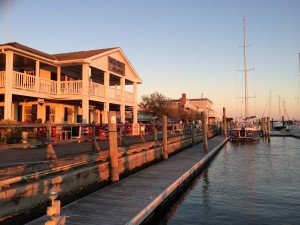 Meantime, work continues on a new bridge that will serve as the southern gateway to the Outer Banks.

The bridge being built in Beaufort will enable travelers to bypass the former fishing village and a drawbridge that was opened whenever a vessel wanted to pass.

Vehicle trip times will be more dependable. That’s important to tourists destined for the Outer Banks. They need to arrive on time for a ferryboat ride to Ocracoke.

The 2-plus hour ferry trip all but requires a reservation to secure one of the limited spaces on vessels that make the one-way crossing just five times a day during the summer season. For deadline-driven tourists, Beaufort’s charms wear thin when traffic delays jeopardize their ability to arrive at the ferry on time.

“The Gallant’s Channel bridge [is] being built to replace a 59-year old functionally obsolete bridge,” Steve Abbott, a spokesman with the North Carolina Department of Transportation, said in an email.

“The current bridge is a drawbridge, which means traffic is held up whenever it goes up,” Abbott said. “In its place will be a high rise bridge, which will help alleviate the traffic congestion that develops now [when] the drawbridge is open, especially in the tourist season from late spring into early fall, when traffic is heavier.”

Two other bridge projects along the northern end of the Outer Banks are to make it easier to travel along the islands. Both address damage inflicted by hurricanes Irene and Sandy.

An interim Pea Island Bridge is to replace a temporary metal bridge built following a breach caused in 2011 by Hurricane Irene. The new bridge is to be almost a half-mile long and will follow the path of the damaged bridge.

Another bridge is more environmentally sensitive. The state wants to build the new Rodanthe bridge into portions of the Pamlico Sound.

The goal is to bypass a section of the island that is frequently subject to ocean overwash, even in storms that are not severe. The existing solution to the overwash is to renourish the beach and restore the road. The state has determined that a bridge built in the Pamlico Sound, west of the island, is a more permanent solution.

The Federal Highway Administration is considering the proposal and is to render a final ruling.