I-85 collapse prompted greater use of telecommuting, transit: CBRE report 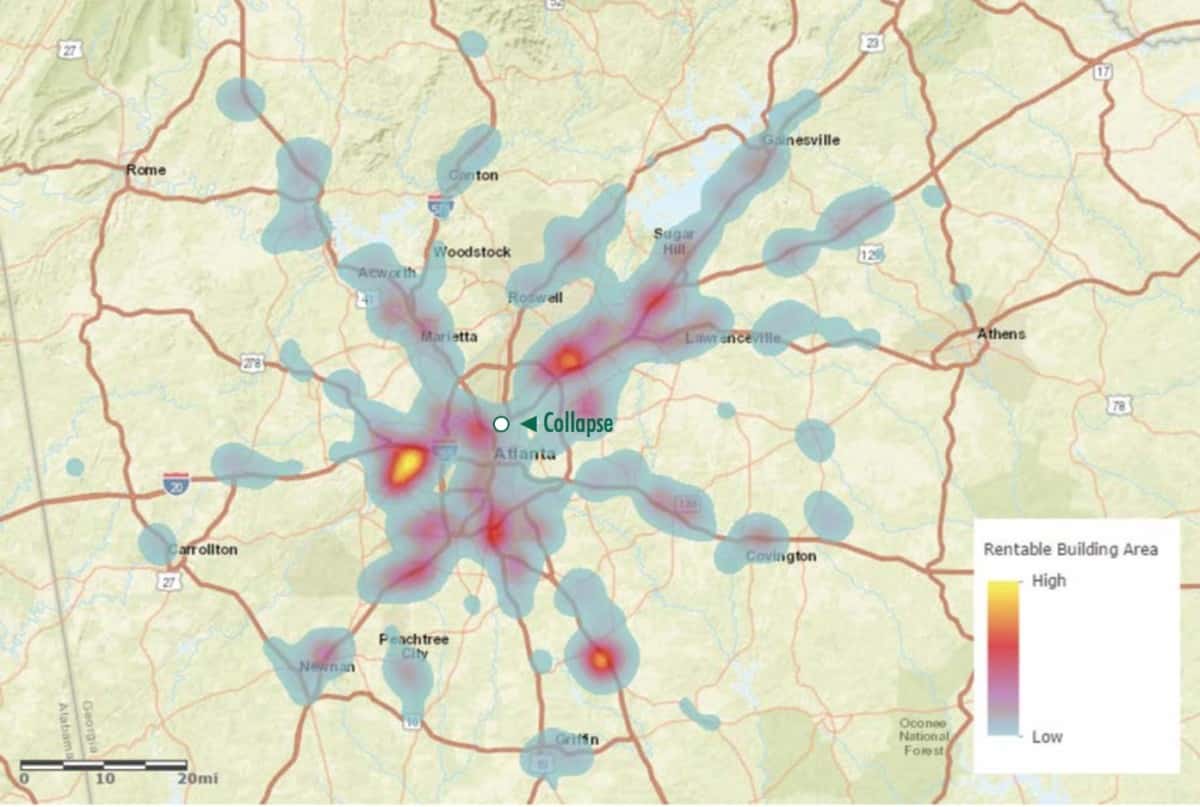 A new report from the real estate firm CBRE on lessons learned from the collapse of Interstate 85 in Atlanta shows that telecommuting played a greater role than MARTA in helping employees continue their work while avoiding traffic congestion.

The four main take-aways from the report titled, Atlanta Infrastructure: Lessons Learned After Seven Weeks without Interstate 85, are:

CBRE notes that its report is “far from scientific,” because results are based solely on a survey of company employees. However, the company employees more than 1,400 individuals in metro Atlanta, leading to the conclusion that, “It is possible that the trends uncovered in this internal survey have application beyond just CBRE to other companies in the Atlanta market.” 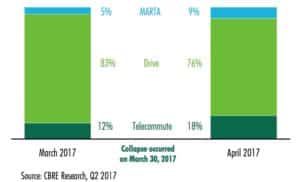 A greater proportion of CBRE employees shifted to telecommuting, as opposed to using MARTA, to cope with traffic congestion following the March 30 collapse of a portion of I-85 in Atlanta. Credit: CBRE

CBRE determined that 18 percent of its workforce was able to increase the frequency of telecommuting after the March 30 collapse of a stretch of I-85.

This increase compares to a near doubling of CBRE employees who ride MARTA – up to 9 percent from 5 percent. The report found that more employees would have taken MARTA if they felt they had “good access” to the system from their homes: “There is an appetite for additional mass transit use in Atlanta.”

Employees who stuck to their vehicles reported commute times increased by 38 percent, to an average of more than 52 minutes, according to the report.

At this point, the numbers in the report require close attention.

Based on data gathered from its own workforce, CBRE determined that the economic impact of the collapse on metro Atlanta was $11.7 million. This cost represents the hours of productivity lost to traffic congestion and is based on the region’s ESRI-reported per capita income of $30,041 and a Census-reported average commute time of 30.7 minutes. 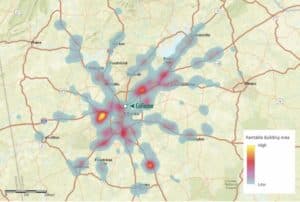 Long-haul trucking avoided significant delays related to the I-85 bridge collapse. Most warehouses are located outside I-285 and state law precludes most trucks from using interstates inside the Perimeter. Credit: CBRE

Long-haul trucking was one market sector that emerged virtually unscathed, according to the report. Metro Atlanta has more than 400 million square feet of warehouse space that is largely reliant on trucks to move materials.

First, most of the region’s warehouses are located outside I-285. A map in the report shows one pocket of warehouse space inside the Perimeter, located west of I-75. This area consists of the massive railroad/warehouse complex served by Norfolk Southern and CSX railroads.

Second, the report notes that most trucking companies route vehicles on I-285, thus avoiding the area where the highway collapsed. In addition, state law prohibits any vehicle with more than six wheels, excluding school buses and motor coaches, from operating inside I-285 except for the following reasons: