A 10-minute walk to a park? Advocates say it should happen in Atlanta 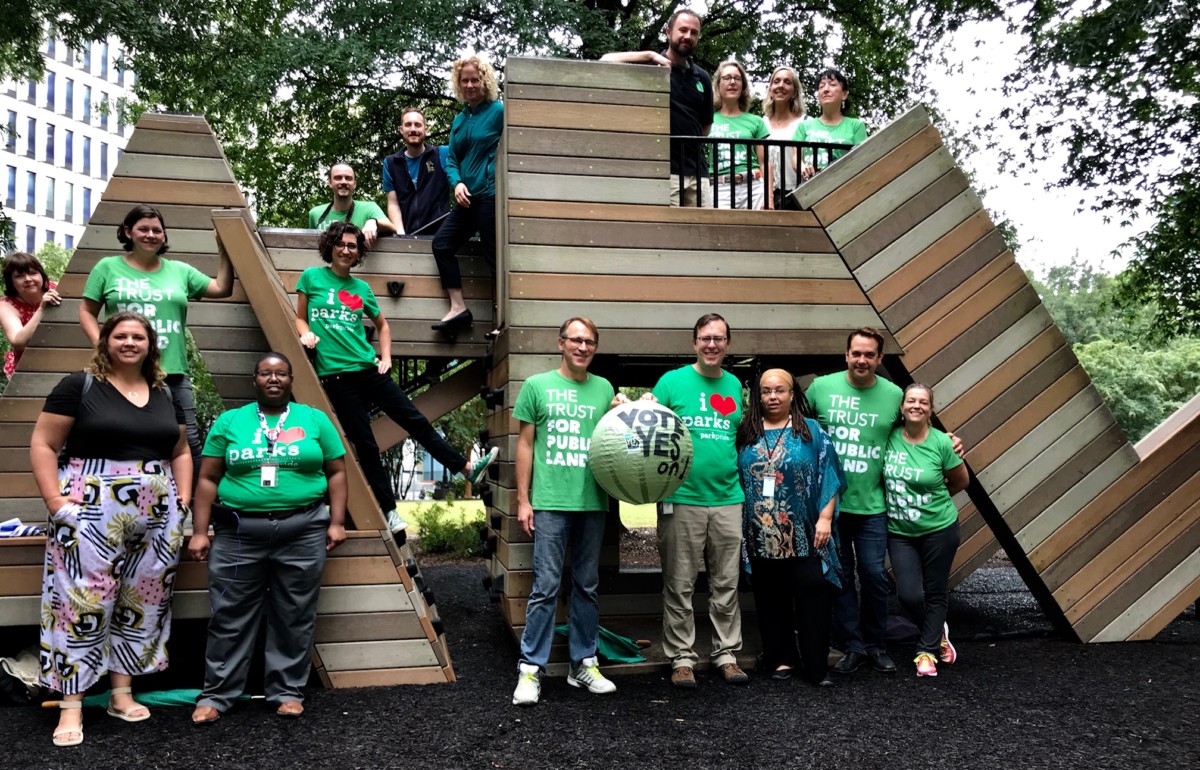 It might be a stretch goal in a spread-out city like Atlanta, but parks advocates say that everyone should live within a 10-minutes walk of some nice public green space. 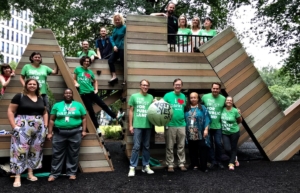 Folks from The Trust for Public Land, Park Pride and the Atlanta Downtown Improvement District hoofed it to Woodruff Park on Wednesday, “National Walk to a Park Day.” Credit: Kelly Jordan

“You find that people who live near parks, they know more of their neighbors, they have more friends and they’re happier with where they live,” said George Dusenbury, Georgia state director at The Trust for Public Land.

So Wednesday, (10/10, by the way) folks across the country walked to parks for what TPL has declared National Walk to a Park Day.

The point of the campaign, said Dusenbury, is to promote there being enough parks so that people can live within a 10-minute walk of one. Parks are important because of what they do for mental health, physical health, strengthening community and the environment, he said.

He was speaking in Woodruff Park, where about 20 folks from The Trust for Public Land, Park Pride, the city of Atlanta and the Atlanta Downtown Improvement District made their pilgrimage.

By TPL’s calculation, about 29.3 percent of Atlantans don’t live within a 10-minute walk of a park. That’s about 135,000 people.  Large parts of northeast Atlanta, the west side and the south side are ranked in moderate, high or very high need of parks, according to TPL. Some of the areas are densely populated, some are more of single-family-home-type areas. (Check out the map here for more details and to check out other cities.)

Michael Halicki leads Park Pride, a metro organization that helps communities get the most out of their parks. He said that looking at it only as this or that geographic quadrant of the city alone misses the larger story.

“It’s that we need more parks throughout the city as a whole and we also need quality parks that meet the communities’ needs throughout the city,” Halicki said. It’s not just if a park is there, but has there been any investment in it lately, does it do what the neighbors need it to do?

So why isn’t Atlanta there?

“I think if anything, it is a stretch goal, when you look at the fact that Atlanta is a decentralized … spread-out city” Halicki said.

City of Atlanta Parks and Recreation Commissioner Amy Phuong arrived at the small park gathering with a piece of paper in her hand: an endorsement of the campaign, signed by Atlanta Mayor Keisha Lance Bottoms.

Phuong said the mayor understands the power of parks and will be rolling out a few parks initiatives soon. Phuong pointed out that Sara J. Gonzalez Park on Coronet Way was just rededicated with works including an all-new inclusive play area for children of all abilities, designed to stimulate all the senses. And on Monday, Atlanta City Council is scheduled to hear an ordinance that would see the city lease Lullwater Conservation Garden on Lullwater Road as a public space, at a nominal $1 per year, with the city to perform routine maintenance.

The city has also OK’d an expansion of Piedmont Park and the Atlanta Botanical Garden that will cost the city some $20.4 million — that’s not even counting what private partners will put into it. Council approved the idea earlier this year, but gave it tough hearings along the way, asking whether it’s equitable to spend so much on one relatively small expansion.

Phuong said the impact fees that are going into that expansion only could have been used for a project like that, and so it is not a case of one project sucking up all the resources.

“When there are other opportunities across the city, we will find those resources, where it meets our goals to continue to expand both the quality of our green spaces and programs, as well as the amount,” Phuong said.

Halicki said he doesn’t think of big signature parks and neighborhood parks as an “either-or” situation. A city needs both, he said, and they do different things.

Just look at the Eastside BeltLine Trail. He said that after people visit it, they go back to their own neighborhoods and advocate for their own fine parks.

“I think that … by looking at what parks can be kind of lifts all boats,” Halicki said. It gets everybody on board with a larger vision and gets them to working on how to get to that vision.

In a TPL ranking of 100 cities by their “Park Score,” Atlanta ranks 43rd in the country as of 2018, up from 50th the year before. The BeltLine is helping bring that score up, as will other green spaces now under construction like Kathryn Johnston Memorial Park. But so is a change in the calculation, to include private support for parks.